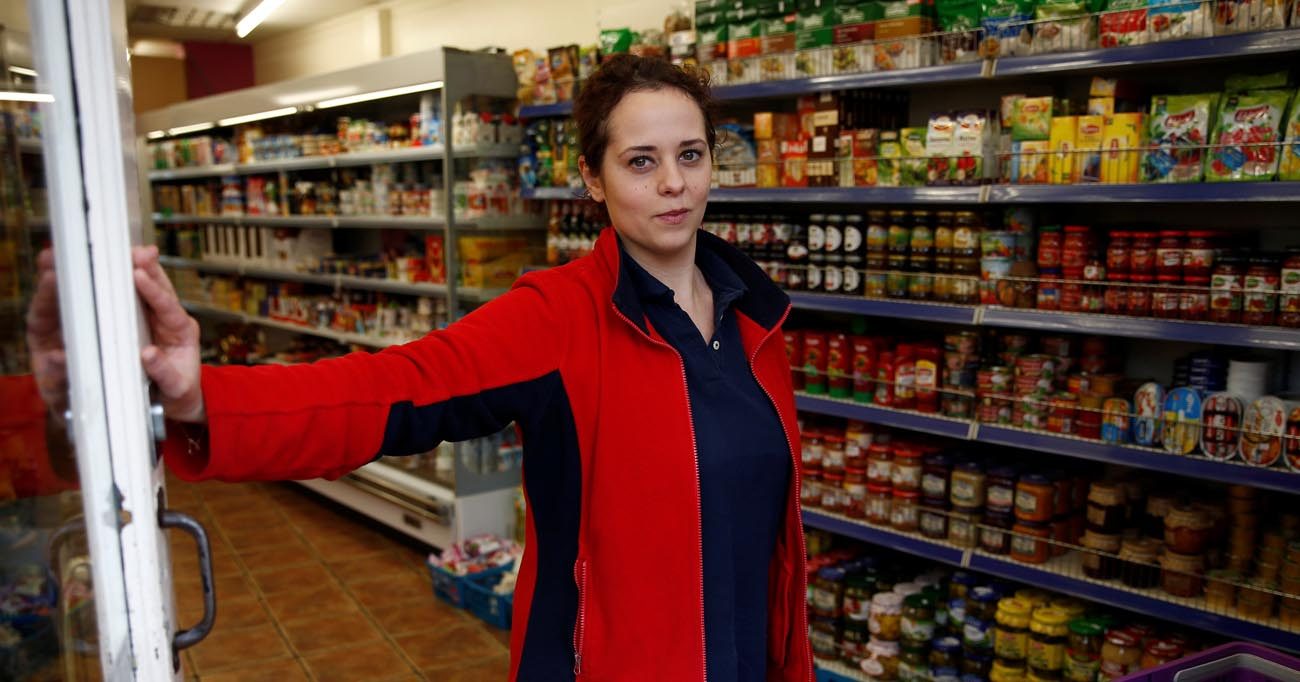 Monika Cyrek, a Polish national who works in a grocery store that sells mostly Polish products, poses for a photograph June 18 in Walton-on-Thames, England. "If we're not wanted here, probably a lot of people will leave and try other places," said Cyrek. (CNS photo/Peter Nicholls, Reuters)

Cardinal Vincent Nichols of Westminster said the “upsurge of racism, of hatred toward others is something we must not tolerate.”

“We have to say this is simply not acceptable in a humane society, and it should never be provoked or promoted,” he said.

The June 28 statement from Cardinal Nichols, president of the Bishops’ Conference of England and Wales, came a day after the National Police Chiefs’ Council revealed that of 85 complaints of hate crime were received between June 23, the day of the referendum on United Kingdom membership in the EU, and June 26.

The figure represented a 57 percent increase in such offenses in a similar period just a month earlier.

Xenophobic incidents included the vandalism of the buildings of a Polish social and cultural association in London and the verbal abuse of foreigners on a tram in Manchester, a film of which was sent to Channel 4 News June 28.

Far-right nationalists at a rally in Newcastle June 25 unfurled a banner that demanded: “Stop Immigration, Start Repatriation” and, on June 28, a German woman who has lived in Britain since the 1970s wept as she told LBC London radio that she was too scared to leave her house three days after dog excrement was thrown at her windows.

She said: “My neighbors told me that they don’t want me living in this road and that they are not friends with foreigners.”

“My friend … has a grandson who is 7 and who was beaten up because he has a foreign grandmother,” she added.

Britain has been a primary destination for many citizens of poorer EU countries, with annual net migration reaching 330,000 people a year. Many of the migrants to the U.K. are Catholics from Central Europe, Asia and Africa.

Bishop Philip Egan of Portsmouth told CNS in a June 28 telephone interview that, in his diocese, there were “huge numbers of immigrants from Poland, Kerala (India), the Philippines and Nigeria.”

“I am extremely sad to think of violence against foreign people who are living here,” he said. “There is no justification whatsoever for that.

“Many of these immigrants are already beloved members of our communities. They have contributed to local life and organizations,” he said.

“Britain has always, through the centuries, been a country which has assimilated people from abroad, and they have taken on our values, and also they have made us proud because they have made a great success of it,” Bishop Egan said.

“Both materially and spiritually, the vast majority of people who are working here and in our diocese are making a wonderful contribution,” he added. “To think of violence against them is self-destructive. It is self-harm. We are harming ourselves as much as we are inflicting division and suffering on others.”

Bishop Declan Lang of Clifton, the diocese based in Bristol, also issued a statement telling Catholics that it was important “to work for the common good and not create barriers of division and prejudice.”

“We should have a profound respect for one another, and this should be reflected in the way we speak and behave,” said the statement posted on the diocesan website June 27.

“We need to keep in mind the needs of all citizens, particularly those who may feel marginalized at this present moment, and continue to be a tolerant society, free of racial and religious prejudice,” he said.

Concerns over the phenomenon of mass migration, and the apparent inability of the U.K. to control its borders, had helped to fuel efforts to take Britain out of the EU in a referendum won by the “Leave” campaigners, with the public voting 52-48 percent to withdraw from the bloc.

British Prime Minister David Cameron, who had fought for the U.K. to remain inside the EU, announced his resignation June 24.

In the weeks before the referendum, national newspapers such as the Mail on Sunday had exposed how far-right nationalists, including neo-Nazis, had been actively campaigning on the Leave side.

Witold Sobkow, Poland’s ambassador to the U.K., expressed shock at the surge in xenophobic abuse.

Cameron told the House of Commons June 27 that such crimes must be stamped out. “We will not stand for hate crime or these kinds of attacks,” he said.