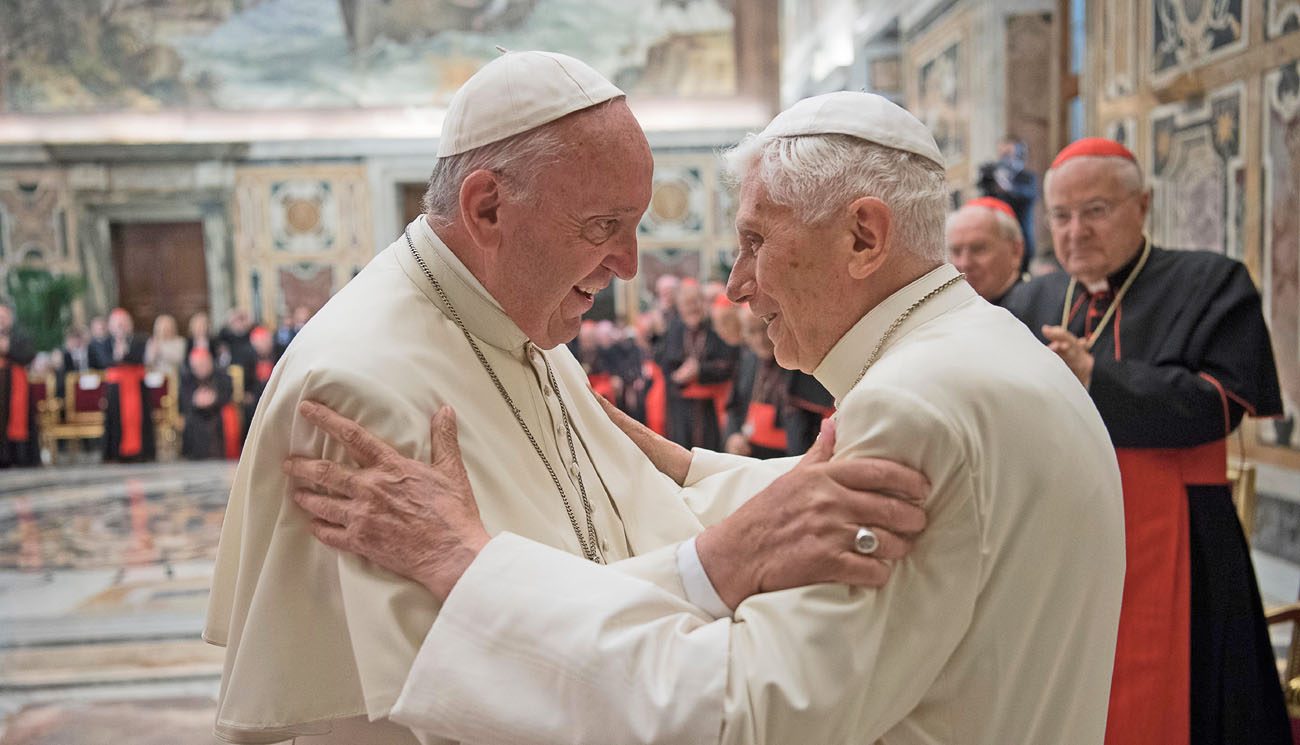 VATICAN CITY (CNS) — In his first public address in almost a year, retired Pope Benedict XVI expressed his sincere gratefulness to Pope Francis, saying that his goodness “from the first moment of your election, in every moment of my life here, touches me deeply.”

“More than the beauty found in the Vatican Gardens, your goodness is the place where I live; I feel protected,” Pope Benedict said June 28.

Pope Benedict also conveyed his hope that Pope Francis would continue to “lead us all on this path of divine mercy that shows the path of Jesus, to Jesus and to God.”

Pope Francis led a Vatican celebration for the 65th anniversary of Pope Benedict’s priestly ordination. The two were joined by the heads of Vatican offices and congregations and several guests, including a delegation from the Orthodox Ecumenical Patriarchate of Constantinople.

Those gathered gave Pope Benedict a standing ovation as he made his way into the Clementine Hall and took his seat to the right of the pope’s chair.

A few minutes later, Pope Francis entered the hall and made a beeline for his predecessor, who respectfully removed his zucchetto before greeting him. Pope Francis has made no secret of his admiration for the retired pontiff, often comparing him to a “wise grandfather at home.”

During his return flight to Rome from Armenia June 26, Pope Francis praised Pope Benedict for “protecting me and having my back with his prayers.”

Recalling Pope Benedict’s promise of obedience to his successor in the days leading up to the conclave, Pope Francis said he had heard that some people have been “sent away” by the retired pontiff after complaining “about this new pope.”

“If (the report) isn’t true, it is well-founded, because this man is like that: a man of his word, a righteous man!” Pope Francis exclaimed.

Speaking at the anniversary celebration, Pope Francis praised Pope Benedict’s life of priestly service to the church and recalled his writings on Simon Peter’s response to “Jesus’ definitive call: ‘Do you love me?'”

“This is the hallmark dominating an entire life spent in priestly service and of the true theology that you have defined — not by chance — as ‘the search for the beloved.’ It is this that you have always given witness to and continue to give witness to today,” he said.

Even in retirement, he said, Pope Benedict continues to serve the church and “truly contributes with vigor and wisdom to its growth” from the “little ‘Mater Ecclesiae’ monastery in the Vatican.”

The monastery, Pope Francis continued, is the complete opposite of those “forgotten corners” society often assigns to those who have reached old age.

Instead, like the Porziuncola where St. Francis spent his final days in prayer, the Mater Ecclesiae monastery “has become a ‘Franciscan’ place that emanates tranquility, peace, strength, faithfulness, maturity, faith, dedication and loyalty which does so much good for me and gives strength to me and to the whole church,” Pope Francis said.

Congratulating his predecessor, Pope Francis expressed his hope that Pope Benedict “would continue to feel the hand of the merciful God that sustains him” and that he may “experience and give witness to God’s love.”

When Pope Francis finished speaking, Pope Benedict clasped his hands together and signaled his thanks to the pope. With a bit of effort, he rose to his feet and stretched out his arms to embrace Pope Francis.

After short speeches by Cardinal Gerhard Muller, prefect of the Congregation for the Doctrine of the Faith, and Cardinal Angelo Sodano, dean of the College of Cardinals, the retired pontiff slowly stood up once again to express his gratitude.

Despite his frailty, Pope Benedict vividly recalled his ordination 65 years ago, remembering a Greek word a priest ordained with him wrote on the remembrance card of his first Mass: “Eucharistomen” (“We give you thanks”).

“I am convinced that this word, in its many dimensions, has already said everything that can be said in this moment,” the retired pope said.

The word “eucharistomen,” he added, can bring everyone closer toward that “new dimension” of thanksgiving given by Christ, who transformed the cross, sufferings and the evils of the world “into grace and blessing.”

“We want to insert ourselves in this grace of the Lord and thus truly receive the newness of life and help in the transubstantiation of the world. May it be a world not of death but of life, a world in which love has overcome death,” he said.