Vocational support: Cardinal uses music as part of his ministry 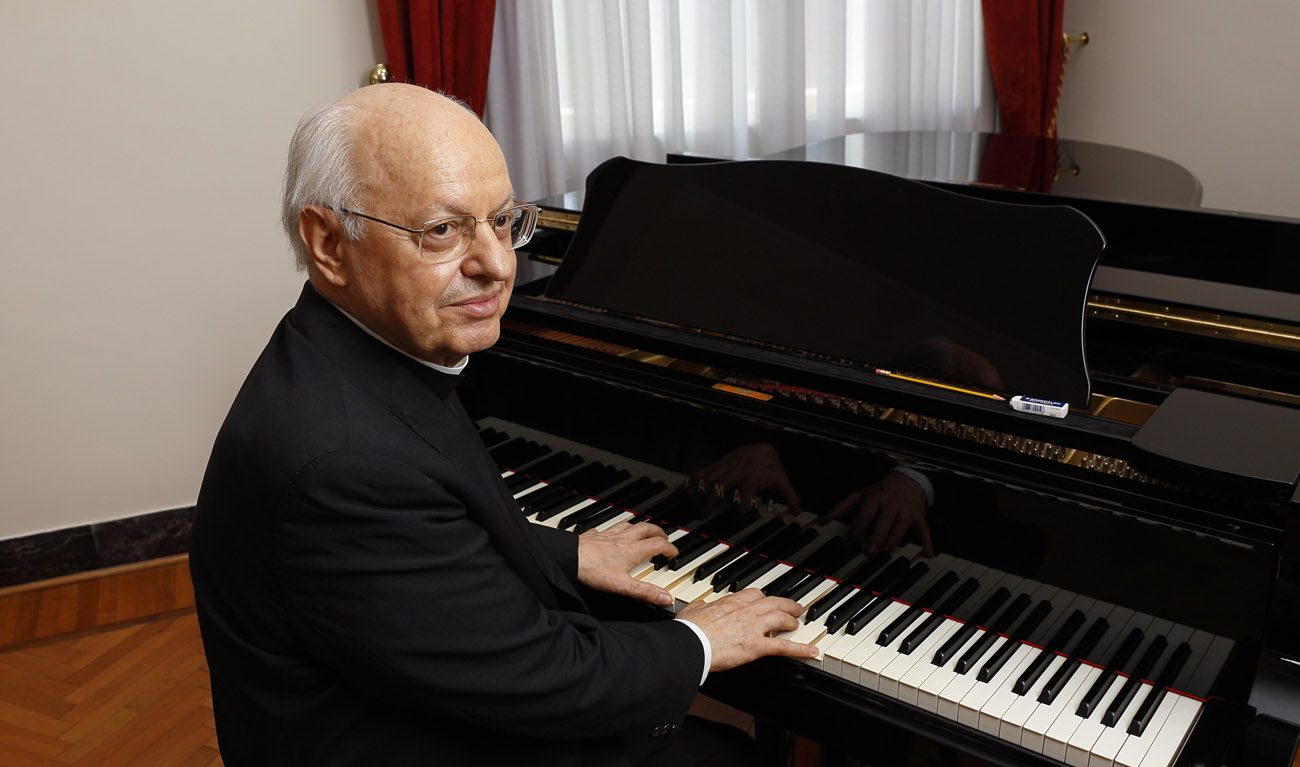 Cardinal Lorenzo Baldisseri, general secretary of the Synod of Bishops, plays the piano in his office at the Vatican June 15. Cardinal Baldisseri, who just released his third CD, said playing the piano helps his priestly vocation to reach others with the Gospel. (CNS photo/Paul Haring)

VATICAN CITY (CNS) — Cardinal Lorenzo Baldisseri’s priesthood always has had a musical soundtrack. In fact, he bought a piano while living in Haiti and shipped it to his new posts first in Paraguay, then India, Brazil and on to his Vatican apartment.

The well-traveled piano is still in his apartment. Another medium grand Yamaha sits in a large reception room next to the chapel in the Vatican offices of the Synod of Bishops, where the Italian cardinal serves as secretary general.

In an interview June 15, not long after the Italian release of his third CD, Cardinal Baldisseri said he began playing the piano at the age of 10. Sixty-five years later, he still tries to play at least two hours a day, “maybe three.” Although when the Synod of Bishops is in session, that’s obviously impossible.

Born in Barga, a town in Tuscany, he entered the minor seminary in nearby Pisa at the age of 12. He said he was convinced even then that he was called to priesthood.

Before his voice broke at the age of 14, he said, he was in great demand as a singer in the choir. After that, he focused on the black and white keyboard.

The superiors of the seminary, he said, understood “my vocation not only for the priesthood, but for music at the same time.”

His formal music training continued throughout his years in the seminary and, after priestly ordination in 1963, his bishop sent him to the conservatory in Lucca, the birthplace of Giacomo Puccini. His next stop was the Pontifical Academy of Sacred Music in Rome, where he earned a bachelor’s degree in Gregorian chant.

Obviously, he studied organ, he said. But the piano is his instrument. “First, it’s easier to find a piano than an organ,” but also the two instruments have “a different touch.” The piano is “more expressive” and responds directly to his touch, the cardinal said.

His formal studies were derailed when the Vatican Secretariat of State asked his bishop to release him to the Pontifical Ecclesiastical Academy, which is where Vatican diplomats are trained. Graduate studies in canon law and theology followed, then a string of assignments at Vatican nunciatures overseas.

But the foreign postings — representing the Vatican to the local church and the national government — gave him an opportunity to meet “many important pianists and musicians” from Zimbabwe to Paraguay. He studied with Joao Carlos Martins, the pianist and conductor, in Brazil and was honored to play with the maestro’s orchestra.

Cardinal Baldisseri spent decades playing at receptions hosted by the Vatican diplomats. In Haiti, when there often was no electricity and little to offer guests, he said he could always treat people to a concert.

His music helped him communicate with people in Japan long before he picked up the basics of Japanese and always has been a way to connect with young people, he said.

Some priests, he said, make those connections with young people through sports. “My talent was music.”

“As a priest, I have the vocation to live, to testify and to preach the Gospel,” he said. Priestly ministry comes first, the cardinal said, but the musical talent God gave him also helps him approach people.

“I start with music and then we continue to the faith,” the cardinal said. “We establish very good relations, then I bring my experience not only as a musician but as a man of faith.”

“Music is prayer,” he said, especially classical music. Although when he is practicing for a concert, the cardinal said that is pretty much just plain work.

“All artists are open to transcendence,” he said. They take materials or sounds and transform them into something beautiful, which reflects the beauty of God. “It’s very close to the faith, very close to God.”

Shortly after Easter, Cardinal Baldisseri celebrated Mass for inmates at Rome’s Regina Coeli prison. Afterward, he played for them, mixing a repertoire he thought they would enjoy: the theme songs from the films “Doctor Zhivago” and “Love Story,” some Neapolitan classics and, of course, his beloved Chopin.

“It was an exciting moment,” he said.

Priesthood and music “always went together,” the cardinal said. “It was an excellent medium to evangelize, to share the Gospel. It’s splendid.”

NEXT: Tourists must blow whistle on trafficking during Olympics, religious say