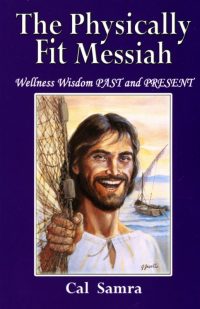 Good health care is not defined solely by the medical assistance we receive during times of illness or after an accident, Cal Samra insists in “The Physically Fit Messiah.” Life patterns that foster good health ought to become personal goals of ours long before a virus attacks or a bone is broken.

This is a book about good, personal health care habits, but its scope exceeds that. It also is a book about Christianity’s deeply rooted interest in good health. Their faith inherently encourages Christians to foster their own health and that of others, Samra suggests.

“The great appeal of early Christianity was not only that it promised heaven and the afterlife, but also that it was viewed as a healing faith in this life,” he writes.

After pointing out that churches sometimes are called “hospitals for the sick,” Samra asks: “If that is so, isn’t it the responsibility of churches to teach people how to live a healthy lifestyle?”

In chapter after chapter, the author highlights religious leaders throughout history who assumed roles in promoting the building blocks of good health.

He recalls an episode of “60 Minutes,” CBS-TV’s weekly newsmagazine show, on the “remarkable longevity” of the Orthodox monks of Mount Athos in northern Greece. Do their long lives reflect the monks’ habit of eating simply, consuming fish, fresh vegetables, fruits and grains they grow themselves?

Samra notes that the monks also “do physical chores and walk everywhere.” In addition, they adhere to Orthodox days of fast and abstinence and “pray constantly.”

John Wesley, the 18th-century founder of Methodism, “recommended a diet close to vegetarian … and drinking a lot of water,” says Samra. Wesley, he adds, advised the clergy to “get open-air exercise three hours a day by walking or horseback riding.”

The keys to sound health that Samra recommends extend from good nutrition and regular physical exercise to prayer, days of fasting and a cheerful attitude that allows plenty of room for laughter. Even a nap can be restorative.

“When Jesus slipped away from the crowds, I believe he did so not only to pray, but also to take a nap,” says Samra.

It is unsurprising that Samra views humor and joy as basic factors of a balanced lifestyle that supports health. He is the long-time editor of a publication called The Joyful Noiseletter that encourages pastors, churches, seminaries and others to make humor a constant in their lives.

Samra is confident that Christ “used humor, as well as prayer and compassion, in his healing ministry.”

Given his long career devoted to securing a place for humor in churches, one might expect Samra to point out, as he does, that “Christianity recognizes joy as one of the fruits of the Holy Spirit.”

His long career equipped Samra with a reservoir of good jokes, and he rewards readers of “The Physically Fit Messiah” with quite a few. In one a doctor says to a patient: “Eat more and exercise less. I could use the business.”

I should point out that healthy lifestyles contribute not only to the well-being of Christians as individuals and families, but can spill over to improve the environment in churches.

Samra calls attention to an 1866 article by Harriet Beecher Stowe, author of “Uncle Tom’s Cabin,” expressing hope that “the proper ventilation of (Christian) churches and vestries would remove that spiritual deadness of which their prayers and hymns complain.”

Despite a sweet tooth, I am dedicated, as Samra recommends, to sound nutrition. I allot generous amounts of time to physical exercise too and take spirituality seriously. There is much, then, in this book for me to appreciate.

I assume that the exercise, good nutrition, sense of humor, prayer and habits of life recommended by Samra would benefit almost anyone. The book conveys this message effectively.

In what ways, though, is this well-balanced approach to life limited — for example, in cases of mental illness? Samra’s chapter critiquing various mental health professionals and medications they prescribe came across to me as rather harsh and in need of fine-tuning.

Samra’s overall message is welcome, however. He challenges churches, asking if they “have neglected Christendom’s centuries-old commitment” to health and downplayed “Jesus’ reputation as ‘the Great Physician,’ who spent many of his days on earth healing people and teaching them healthy lifestyles.”

NEXT: Story of stressed-out moms morphs into a crude joke