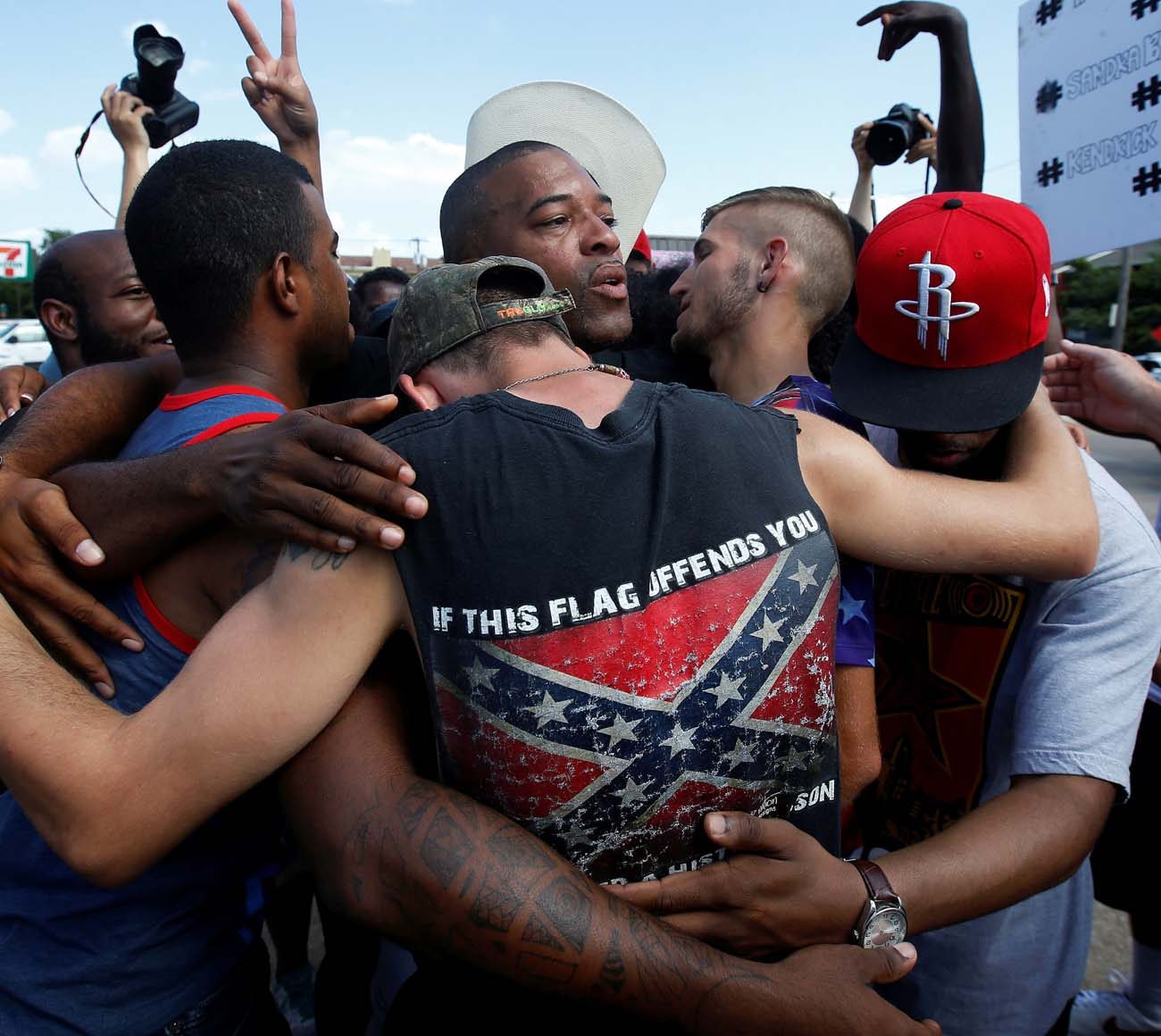 African-American and white men embrace after taking part in a prayer circle July 10 following a Black Lives Matter protest in Dallas. Theologians and justice advocates have called upon the church to better address racism as a life issue and see it as an "intrinsic evil." (CNS photo/Carlo Allegri, Reuters)

WASHINGTON (CNS) — Father Bryan Massingale, a priest of the Milwaukee Archdiocese and well-known theologian, knows what it’s like to be watched by police.

He said that as a black man there have been times he has been followed by police officers on the campus of Marquette University, where he taught for 12 years, as he walked on campus when he wasn’t wearing his priestly garb.

It’s a sign, Father Massingale told Catholic News Service, of the widespread racism that is entrenched in American culture.

Racism takes many forms: unequal access to housing, economic segregation, differences in the quality of schools between poor and well-to-do communities, and how police approach someone at a traffic stop or a street-side altercation.

“That’s why we need to understand that racism is more than negative speaking,” said the priest, who will join the theology faculty at Fordham University Aug. 1. “It’s really a cult of white supremacy. (Saying) that makes us feel uncomfortable because most people feel it’s related to the Ku Klux Klan. It’s not that. It’s a subtle culture of white belonging, that somehow public spaces belong to ‘us’ in a way (that) for others they are not.”

It’s time, Father Massingale said, for the U.S. Catholic Church, led by the bishops, to hold up racial injustice as an “intrinsic evil,” just as it has prioritized abortion and same-sex marriage.

“This indeed is a life issue,” he said.

Father Massingale is not alone in his call nor in using strong language when discussing what has been described as systemic racism. Other Catholic theologians and social justice leaders urged the U.S. Conference of Catholic Bishops to openly and honestly confront the “original sin” of racism and acknowledge that a sense of white privilege is widespread and continues to harm communities of color.

While church teaching about racism has been clear, they told CNS, church practice has not always been forthright.

Some initiated a call for the bishops to develop a new pastoral letter on racism to address 21st-century concerns. The last, “Brother and Sisters to Us,” was issued in 1979. In it the bishops called racism a sin. A report commissioned by the USCCB for the 25th anniversary of the document in 2004 found that while some progress in addressing racism had been made within the church, results had fallen short of expectations.

In ongoing efforts to address race relations, the USCCB established the Secretariat of Cultural Diversity in the Church in 2008 to coordinate the bishops’ outreach to African-Americans, Asians and Pacific Islanders, Hispanics, Native Americans and migrants, refugees and travelers.

Donna Grimes, assistant director, African American affairs, in the secretariat has led “intercultural competency” training sessions around the country for three years. The programs, lasting up to three days, focus on helping parishes to become welcoming places to newcomers in an increasingly diverse church.

Priests and seminarians in particular, Grimes said, are interested in learning how to guide parishes to be more welcoming communities. Still, there are concerns, she said.

“Many seminarians seem to be out of touch with some of the communities I’m familiar with,” said Grimes, an African-American. “I get a sense that they expect to be ordained and to go to perhaps a suburban parish like the one they grew up in. But with the shortage of priests and the need for priests to be flexible, it’s very important that they pick up the skill, knowledge and attitudes, I would say, to be interculturally competent.”

Discussions among parish participants during the sessions — and afterward — have revealed a desire for the church to more aggressively confront racism, Grimes said.

“People would really like to hear more from the bishops. This is what I keep hearing. They say, ‘Do they (the bishops) care? Is it really a church home for me?'” Grimes said.

Theologians such as M. Shawn Copeland at Boston College, Kathleen Grimes (no relation to Donna Grimes) at Villanova University, Karen Teel at the University of San Diego and Jon Nilson of Loyola University admitted that whites become alarmed when terms such as white supremacy and white privilege are used to explain why racism persists. Copeland is black; the other three theologians are white.

Using such terms is a way of raising awareness of the struggles within herself and within her students to better understand people of different backgrounds, Teel told CNS.

“I find that many white people don’t know what’s going on (economically and socially). Given the nature of white supremacy, it’s our nature not to understand it,” Teel explained.

“Part of what I’m trying to do is break down how whiteness works and how white people think and explain and talk about the history (within the context of church teaching),” she added.

The answer to racism rests in understanding that human dignity is foremost in church teaching, Copeland said.

“The very simple answer is love of God and love of neighbor. And it’s also the most complex answer because it requires the most profound conversion of mind and heart,” she said.

Beyond the bishops, parishioners must take charge in the fight against racism, Copeland added.

“We are all responsible. It’s not about guilt. It’s about responsibility. Whether you came to the United States last week or came 300 years ago, we’re all responsible for the condition of our country.”

Prayer, reflection and discussion are major parts of a year-old effort by Pax Christi USA to build interracial understanding and promote peace. Sister Patricia Chappell, executive director, said the Communities of Color workshops, offered six times thus far, are meant to bring people together to talk and reflect on the gifts they bring to the church as well as the wider community.

“The reality of the Catholic Church and, of course, our country is that Sunday morning services still continue to be the most segregated times in America,” said Sister Patricia, who is black and a member of the Sister of Notre Dame de Namur.

Pax Christi USA leaders decided to develop the workshops because they saw that true peace would never be realized until people better understood each other. In many cases, the discussions are the first that participants have ever had about race relations.

“It’s providing an opportunity for people to build community and to be in right relationships with each other,” Sister Patricia said, “and to continue this discussion of how do we build this community valuing the cultural and ethnic gifts that each person brings.”

PREVIOUS: Catholics, ‘all people of goodwill’ urged to pray for peace in U.S.

NEXT: Castile funeral at St. Paul cathedral sign of mercy for family, mourners