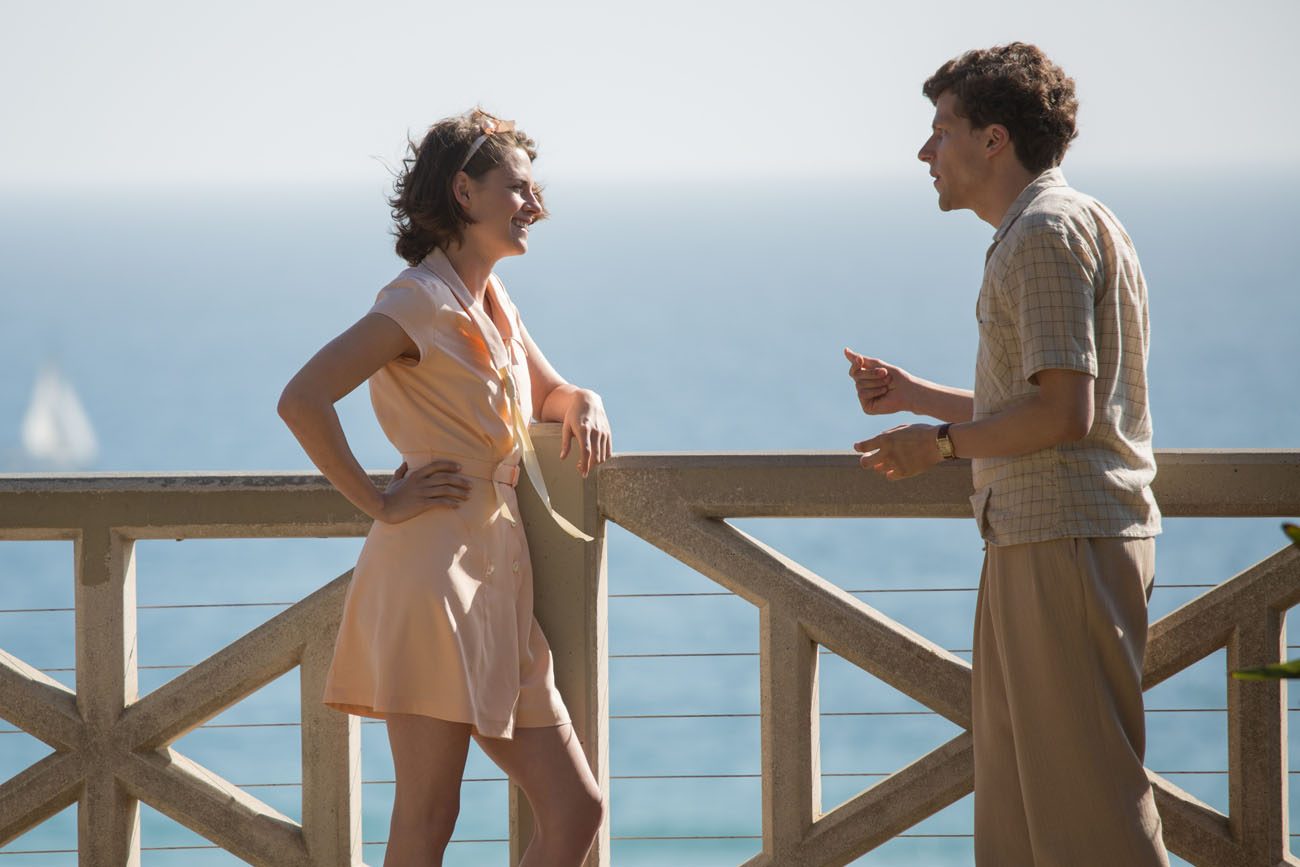 Kristen Stewart and Jesse Eisenberg star in a scene from the movie "Cafe Society." (CNS photo/Lionsgate)

This variation on “the heart wants what the heart wants” — a saying ultimately traceable, in a slightly different form, to an Emily Dickinson poem — is not a lucid theme here.

These men and women are all one-dimensional archetypes, however. Sincerity, moreover, gives way to Allen’s one-liners, and no one becomes any wiser for their experiences.

In 1936, Bronx-bred Bobby Dorfman (Jesse Eisenberg), who no longer wants to help out in his father Marty’s (Ken Stott) jewelry store, decides to leave his supportive family to find a job with his uncle Phil (Steve Carell), a powerful agent out in Tinseltown.

Phil fixes contracts, drops names and solves such dilemmas as “Adolphe Menjou is threatening to walk off the set!” He doesn’t have much beyond menial errands for Bobby. But to help the lad acclimate to his new surroundings, Phil introduces him to his lissome secretary, Vonnie (Kristen Stewart).

Bobby and Vonnie quickly hit it off, although he doesn’t realize that the journalist boyfriend of whom she often speaks is actually Uncle Phil, who wants to leave his wife. No one in Hollywood, including Nebraska-born Vonnie, is the person he or she appears to be — although Vonnie is very clear-eyed about her life choices.

When Bobby learns the truth, he gives up on L.A., returning to Gotham to manage a new nightclub owned by his gangster brother, Ben (Corey Stoll). This leads to more glamorous nightlife and eventually to marriage with shimmering blond heiress Veronica (Blake Lively).

Allen, who provides a lot of needless narration in lieu of plot, stages all the necessary confrontations and arguments. He then brings the whole ensemble together at the end to ponder their decisions and the melancholy they’ve brought on themselves.

Even so, any sustained, serious engagement with topics like marital fidelity gets lost amid Allen’s trademark humor.

The film contains bloodless gun violence, mature themes, including adultery and prostitution, a drug reference, several uses of profanity and at least one crude term. The Catholic News Service classification is A-III — adults. The Motion Picture Association of America rating is PG-13 — parents strongly cautioned. Some material may be inappropriate for children under 13.

NEXT: ‘Song of the Deep’ a puzzling undersea adventure