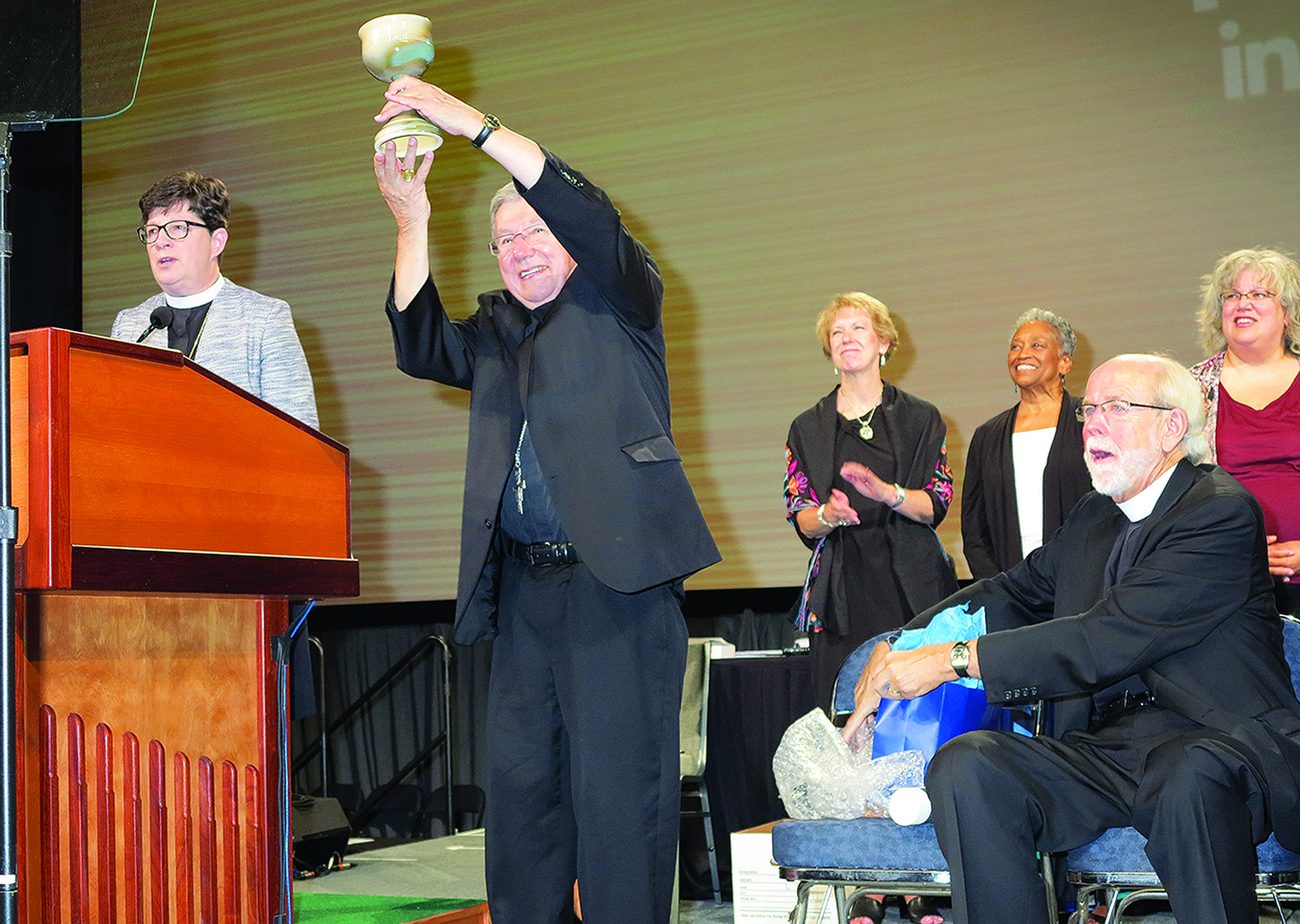 NEW ORLEANS (CNS) — When Martin Luther wrote his “Disputation on the Power and Efficacy of Indulgences” in 1517 — mostly challenging the Catholic Church’s sale of indulgences — and posted it on the Wittenberg Castle door, it forever changed the church and sparked the Protestant Reformation.

In preparation for the 500th anniversary observance of the Reformation in 2017, 2,000 members of the Evangelical Lutheran Church in America gathered for its Churchwide Assembly Aug. 8-13 in New Orleans. Its theme was “Freed and Renewed in Christ: 500 Years of God’s Grace in Action.”

A key action at the assembly was the vote Aug. 10 on the document “Declaration on the Way: Church, Ministry and Eucharist,” paving the road to unity between Catholics and Lutherans. It was approved by a 99.04 percent margin — 931 votes yes and only 9 votes no — to an uproarious applause that lasted over a minute at the assembly.

“Let us pause to honor this historic moment,” ELCA Presiding Bishop Elizabeth Eaton said after the vote. “Though we have not yet arrived, we have claimed that we are, in fact, on the way to unity.”

Bishop Eaton said this document allows the two Christian churches –- after 500 years of division and 50 years of dialogue –- “to journey to 2017 and beyond from a place of common narrative of shared history and our common commitment to our shared future as we seek the full, visible unity of the church” not only with Catholics but other Christian faiths as “witness to our common life in Christ.”

As a token of hope for a continued journey toward unity, Bishop Eaton gave a chalice to Baltimore Auxiliary Bishop Denis J. Madden, the Catholic co-chair of the task force that worked on the document.

“It’s a very moving time for all of us, and thank you very much for this treasure of a gift, which I will wait for that day –- which will not be a long time in coming -– when we can share this chalice and the Precious Blood together,” Bishop Madden said in accepting the chalice.

Bishop Madden said receiving the chalice brought to mind the symbolism of Pope Francis’ gift of a chalice to an evangelical Lutheran pastor in Rome. He paraphrased earlier comments made at the assembly about sharing the Eucharist by Lutheran World Federation General Secretary Martin Junge.

“We are moving in that direction when we will be as one church,” Bishop Madden said. “Two ecclesial bodies coming together. It will be just a wonderful day for us to share at the table of the Lord … but we have work to do. God has work for us to do as a body to bring Christ to the world. The world is waiting to hear from us.

“And, we together can do great things for God’s Gospel. We can spread that word, we can share with those who know nothing about Jesus Christ. What a joy it will be for us to share that ministry together. We are surely on the way,” he added.

A joint task force of leading Lutheran and Catholic theologians pulled together “Declaration on the Way: Church, Ministry, and Eucharist” over the past three years, said Bishop Madden. It culls material from 50 years of national and international dialogues and studies between Catholics and Lutherans, including the ground-breaking “Joint Declaration on the Document of Justification” in 1999.

The earlier declaration said the Catholic and Lutheran churches’ consensus on basic truths means that the doctrine of justification — how people are made just in the eyes of God and saved by Jesus Christ — is not a church-dividing issue for Catholics and Lutherans even though differences between them remain in language, theological elaboration and emphasis surrounding those basic truths.

The task force’s findings were compiled in a book of the same name published by Augsburg Fortress Press in time for the assembly. It highlights 32 points where the Catholic and Lutheran churches are in agreement in the church, its ministries and the Eucharist, and also cites 15 areas where more work has to be done, said Bishop Madden.

At the ECLA assembly, Bishop Madden and Father John Crossin, an Oblate of St. Francis de Sales, who is the executive director of the Secretariat for Ecumenical and Interreligious Affairs at the U.S. Conference of Catholic Bishops and a task force member, were among the task force members who fielded questions and read 12 key points of the 32-point document the evening before the vote.

— The Gospel, proclaimed in the Holy Spirit by the apostles, remains the church’s origin and foundation.

— The church was founded on the apostle’s witness to the Gospel, and it continuously professes this faith handed down from them; the church is ruled by the word of God.

— The church participates in Christ’s benefits through the historical and perceptible actions of proclaiming the Gospel and celebrating the sacraments initiated by Christ and handed on by his apostles.

— Entry into the apostolic and God-given ministry is not by baptism but by ordination –- ministers are called by God and designated in and through the church.

— Jesus is truly present in the sacrament of the Lord’s Supper, and sharing in the celebration of the Eucharist is an essential sign of the unity of the church.

Both were astonished by the genuine enthusiasm of evangelical Lutherans -– many of whom are familiar with Catholics through marriage or family -– before and after the vote.

The bigger question is whether the two Christian faiths can reconcile their differences, including the ordination of women. The Lutheran Church has ordained women since 1970; the Catholic Church states definitely that women cannot be ordained as priests. The two churches also differ on the sacramentality of ordination and on describing the church as holy and/or sinful because its members (the body of the church) are sinful.

“That’s what we are working toward,” Bishop Madden said about unity. “Not to make light of the differences, because it’s very important — like the issue of ordination (for Catholics) is critical to the reception of Communion.”

A strong collaboration was established among task force members as they worked on the document, said Kathryn Johnson, director for Ecumenical and Interreligious Relations for ELCA.

Last November the document was presented to the U.S. Catholic bishops at their fall general assembly. Last October it was affirmed by the ELCA Conference of Bishops, an advisory body, which asked the ELCA Church Council to forward the document to the 2016 ELCA Churchwide Assembly, its highest legislative body.

Each church is now considering the next steps toward unity. Several bishops and religious from both churches have discussed joint events to educate people in the pews. And, Pope Francis will be participating in an ecumenical prayer service with Evangelical Lutherans Oct. 31 in Lund, Sweden, to kick off the 500th anniversary of the Reformation.

For the evangelical Lutherans, Bishop Eaton said the document will be presented to the Lutheran World Federation.

For Catholics, the next step is to “get it in the hands of all the bishops and let them know the great response we’ve experienced” at the assembly, Bishop Madden said, and getting it into the seminaries so future priests can see the strides made toward growing in “full communion” as church.

“When the document was presented in Rome to Cardinal (Kurt) Koch, (president) of the Pontifical Council for Promoting Christian Unity, he said he never thought we would get this far,” in ecumenical consensus on topics of church, ministry and Eucharist, Bishop Madden said.

“This is exciting and hope-giving work. We have so much in common. This is a place where we are moving toward reconciliation,” Johnson said.

NEXT: Protecting ‘the innocent is a matter of justice,’ says head of Knights