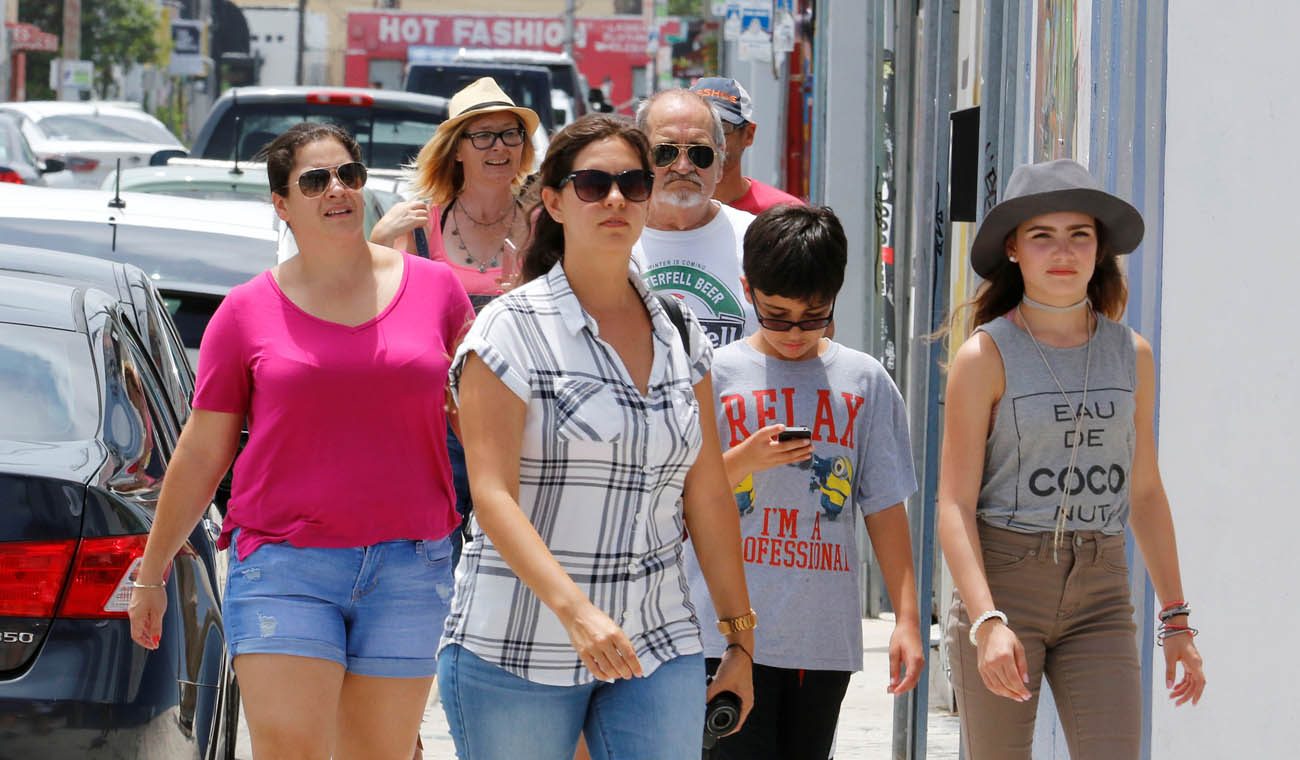 Visitors walk through the Wynwood arts district of Miami Aug. 3. During the first week of August, the Florida Department of Health reported its 16th case of locally transmitted Zika virus in a one-square-mile area of Miami north of downtown, bringing the total number of people infected in the mosquito-borne outbreak to at least 16.(CNS photo/Joe Skipper, Reuters)

During the first week of August, the Florida Department of Health reported its 16th case of locally transmitted Zika virus in a one-square-mile area of Miami north of downtown, bringing the total number of people infected in the mosquito-borne outbreak to at least 16.

New York and Florida have the most cases of travel-related Zika infections nationally — many reportedly associated with travel to the Dominican Republic — but the mosquito-borne transmissions in Florida are a first.

Florida Gov. Rick Scott has directed the state to provide free Zika testing to pregnant women at all county health departments, and counties throughout the state are stepping up mosquito fumigation and eradication efforts.

The CDC is advising pregnant women and couples thinking about getting pregnant to avoid Miami’s Wynwood neighborhood — a mixed-use area of retail, apartments, an arts district and small businesses — and for all others there to take precautions against mosquito bites.

Last year, reports of an increase in the number of infants born with a serious birth defect of the brain called microcephaly in Zika virus-affected areas began to emerge in Brazil. Microcephaly is a birth defect in which a child is born with an underdeveloped brain and an abnormally small head.

Now the threat has arrived locally.

“Back then there were not as many certainties but now that we are in the throes of it there has been a connection established between Zika and birth defects as well as cases of this non-travel (mosquito) transmission in Florida,” said Eileen Hineline, a nurse, noting that many more would undoubtedly have attended the Zika workshop here had it been held this month.

“People are paying more attention to it,” Hineline said, adding that Barry University may be the university closest to the area of Zika infections.

Located less than 10 miles from Miami’s ground zero and with the fall semester approaching, the school is disseminating Zika-alerts and mosquito-avoidance information to its students, faculty and staff across an array of communications outlets.

“We are recommending EPA-approved mosquito repellents, wearing long sleeves as much as possible, keeping windows and doors closed, and that everyone in the community be diligent if they see standing water that they remove it,” Hineline told Catholic News Service. “We need that everyone take ownership of this.”

Hineline noted that since the Zika-carrying Aedes aegypti mosquito is relatively fragile and limited to about 150 meters of travel.

“There is a very good possibility that we can get in front of this and it will be taken care. But as with any virus, you never know there.”

Hineline personally has not seen a case of Zika but said that if a patient does present with possible symptoms, he or she will be referred for Zika testing and further follow-up care.

In addition, she said, anyone who is in Florida and is thinking of traveling to a Zika hotspot in Latin America needs to know he or she can become infected and be a carrier for bringing the disease back home.

Nationally, some 1,800 travel-associated Zika infections have been reported to date, with many times that number reported in the U.S. territory of Puerto Rico — where officials say 10 percent of the population may already be infected — and throughout many parts of Latin America and the Caribbean. Currently, no vaccine exists to prevent Zika virus disease.

Nurse Barbara Russell, who is director of infection control services at Baptist Hospital in Miami and member of Baptist Health’s System Emergency Preparedness Council, said it remains to be seen if mosquito-transmission of Zika will pop up in more and more Florida communities or will be contained.

“The federal government needs to look into this more seriously, as any babies born (with microcephaly) will require a lifetime of care and medical attention,” said Russell, adding that the free Zika testing for pregnant women will be a challenge to fulfill given the sudden Zika fears that pregnant women have statewide.

“If a man has symptoms and has traveled (to Zika-infected areas) he would also be tested, but not otherwise,” Russell said of male patients.

It is not known exactly how long Zika remains present in men who are infected, according to the CDC.

World Health Organization notes that most people infected with Zika virus do not get sick or develop symptoms, and that often the infection rate has been underreported or misdiagnosed.

Mosquitoes that spread Zika virus bite mostly during the daytime, and those same mosquitoes also spread the dengue and chikungunya viruses.

The CDC also is looking at a possible link between Zika and Guillain-Barre syndrome, which damages the nerve cells, causing muscle weakness, and, sometimes, paralysis.

“One of the mysteries is that Zika is one of the first mosquito-borne disease to also be transferred sexually and to me it is a mystery at the moment,” Russell said.

PREVIOUS: 5,600-plus sisters call for civility by candidates in presidential race