Dialogue key in building communion with others, cardinal says 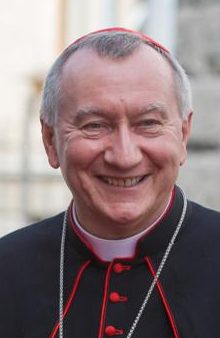 VATICAN CITY (CNS) — Christians must never tire of seeking dialogue with others in order to promote mutual respect and forgiveness among people with different experiences and opinions, a Vatican official wrote on behalf of Pope Francis.

In a message sent Aug. 19 to the Meeting in Rimini, an annual event sponsored by the Communion and Liberation movement, Cardinal Pietro Parolin, Vatican secretary of state, reflected on the importance of dialogue as placing “one’s self in the other’s shoes” while maintaining “the clarity of one’s own identity.”

“We will discover that opening ourselves to others does not impoverish our outlook but rather enriches us so that we may recognize the truth in others, the importance of their experience and the background of what they say, even when there are behaviors and choices hidden behind them,” he wrote.

The choice to focus the gathering on the importance of communion and dialogue with others was a courageous choice at a time when “so many aspects of reality that surround us seem to take us in the opposite direction,” Cardinal Parolin wrote.

“Too many times we give in to the temptation of closing ourselves within the limited scope of our own interests, causing others to become something superfluous, or worse, a nuisance and an obstacle,” he wrote.

Such an individualistic attitude, he added, is contrary to a Christian view of human nature, which recognizes and respects other people as brothers and sisters “of the same father who is in heaven.”

While people may feel helpless in facing this challenge, Cardinal Parolin wrote that Christians should see it as an invitation to “rediscover the foundations of communion among men and women for a new beginning.”

“Our task coincides with the mission by which were called by God: ‘the proclamation of the Gospel that now more than ever translates above all in going out to tend to the wounds of men and women, bringing Jesus’ powerful and simple presence, his consoling and encouraging mercy,'” he wrote, quoting Pope Francis.

“That which attracts, that which conquers and breaks chains is not the strength of tools, but the lasting mercy of the Father’s merciful love, from which everyone can draw from the fountain of grace that God offers in the sacraments, especially in the Eucharist and penance, to then give to our brothers and sisters,” Cardinal Parolin wrote.