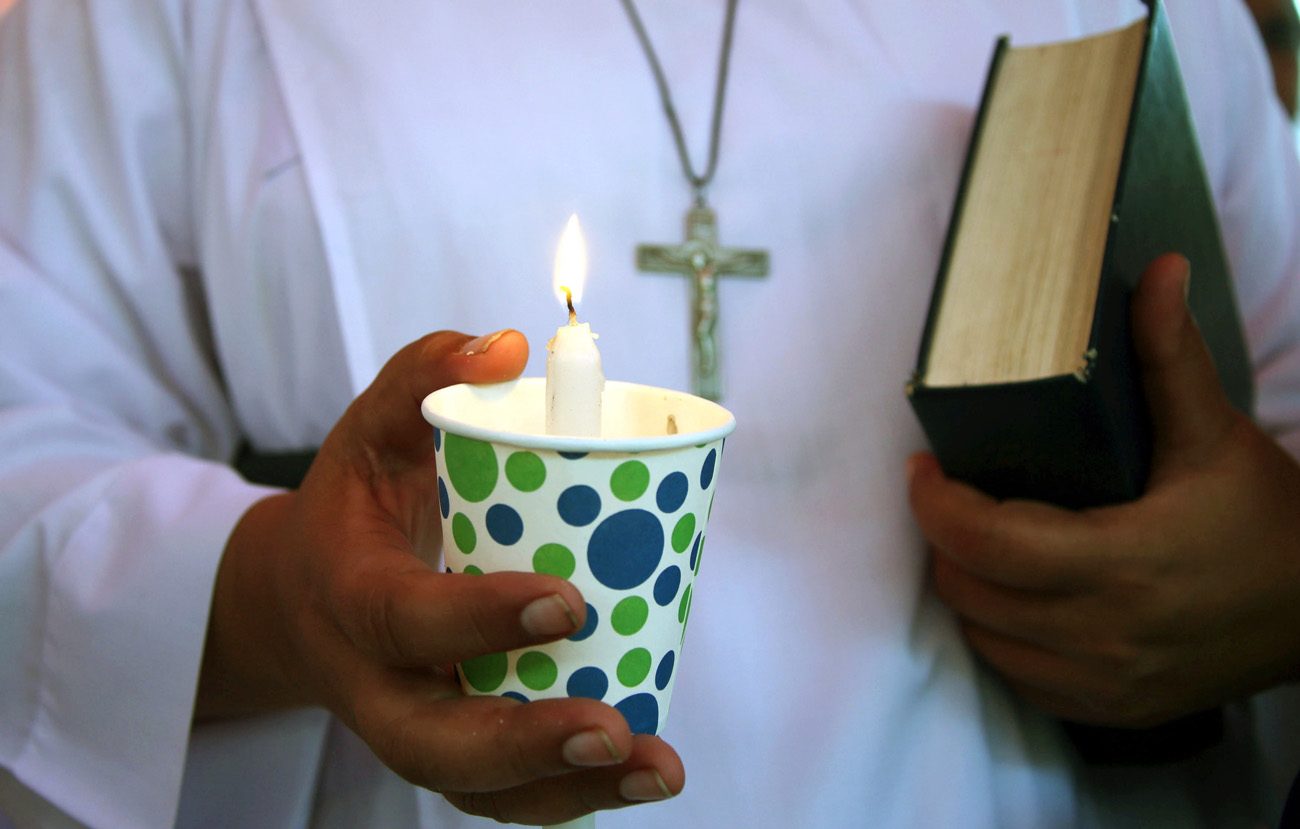 A Pakistani Christian in Karachi holds a candle during a vigil May 15, 2015. Christian social activists and jail authorities jointly inaugurated a chapel Aug. 5 at a Karachi jail with the help of a nongovernmental organization in Landhi.(CNS photo/Rehan Khan, EPA)

KARACHI, Pakistan (CNS) — A chapel for Christian inmates has opened at Landhi Jail in this southern Pakistani city.

Christian social activists and jail authorities jointly inaugurated the chapel Aug. 5, which was built with the help of a nongovernmental organization.

About 100 of the 4,500 inmates in the jail are Christians, reported ucanews.com. Those incarcerated are awaiting trial or serving sentences for various crimes.

The chapel was built near the jail mosque. Muhammad Hassan, a senior jail official, said all inmates are free to practice their faith.

“There is no bar whatsoever on non-Muslim inmates worshipping,” he said.

Ishtiaq Awan, police assistant superintendent, said Christian inmates normally are kept together with Muslims for most of the year, but on special occasions, such as Christmas, Easter and Eid, they are given separate barracks to celebrate their festivals.

Naqash Yousuf, 26, a Catholic, who is awaiting trial in a murder case, was thrilled to have a place to worship.

“Some 40 to 50 Christian prisoners now visit the chapel and attend Sunday prayers,'” he said, adding that the pastor, who is one of the inmates, leads the service.

It was our longstanding wish to have a separate place of worship and thankfully the authorities have fulfilled it,” he said.

Samina Nawab, a leader with Angel Patient Care Services, the NGO that arranged funding for the chapel’s construction, praised a local official for recognizing the needs of inmates.

“We are grateful to Inspector General of Sindh Prison Nadeem Hussain Mangan for his continuous support and cooperation during the construction work and our other initiatives,” Nawab told ucanews.com.

“Our teams frequently visit jails and provide health care services to inmates irrespective of their faith,” she said. “I visited Landhi Jail and met some Christian inmates, who requested our help in the construction of the chapel.

“My family members and pastors made generous contributions to make it possible. Last week, we set up a medical camp at Hyderabad Prison and found out some inmates needed immediate surgery,” she said, adding that her charity was working to raise funds to meet the medical needs.

Islam is the official religion in Pakistan. Citizens are allowed to worship freely; however, prayer halls, churches, chapels and community centers for people of other religious traditions normally are not allowed on government property.

PREVIOUS: Dialogue key in building communion with others, cardinal says