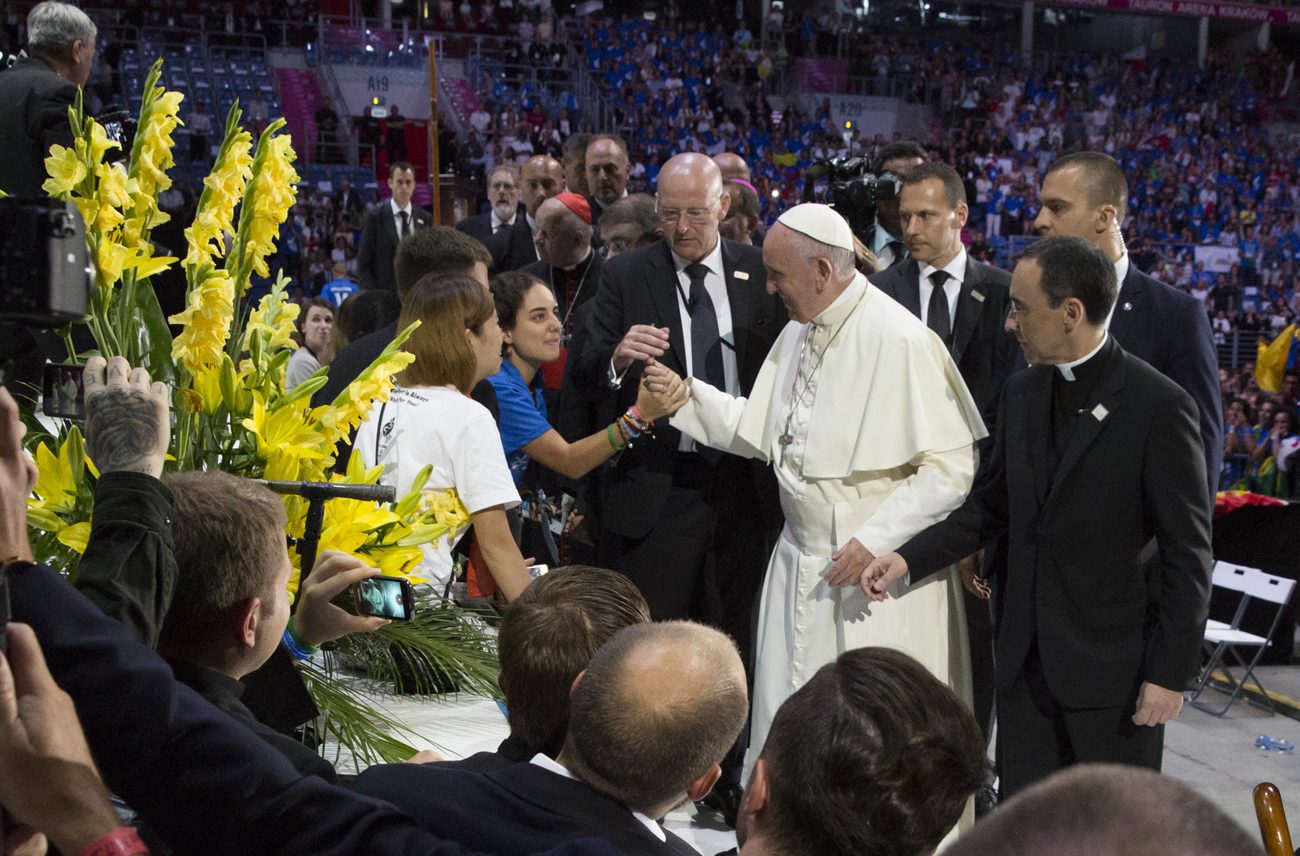 KRAKOW, Poland (CNS) — Pope Francis thanked World Youth Day organizers and volunteers and urged them to be “the hope of the future.”

“I had a speech of five pages — but it’s boring,” Pope Francis said in Spanish, setting aside his prepared remarks.

“Do you want to be the hope for the future? Well, there’s no need to pay an entry fee — you just have to meet some conditions. The first is to preserve your memory: of your people, your family and where you come from, the memory of your journey and what you received from those closest to you. A young person without a memory isn’t a hope for the future.”

He thanked more than 15,000 organizers and volunteers gathered at Tauron Arena for their “hours of prayer.” He also thanked the estimated 50,000 priests and religious order members who had accompanied pilgrims from around the world to the festival.

“How do we have a memory? It’s by talking to our parents and elders, and especially with our grandparents. If we want to be the hope of the future, we have to receive the torch from our grandfathers and their grandfathers,” Pope Francis said.

“But the second condition for the future of hope, aside from memory of the past, is to have courage — to be courageous, not fearful.”

The pope also prayed briefly before an image of Our Lady of Calvary, an image closely associated with St. John Paul II.

He also heard testimonies from four volunteers, including Michal Ciesla, whose brother, Maciej, a graphic artist, died of cancer July 2 after volunteering to help at the festival, and Cristian Gregorio Ruiz Luque, a volunteer from Panama. Earlier, Pope Francis announced Panama as the venue for World Youth Day in 2019.

Ruiz told Pope Francis he believed the experience of volunteering was a way of “growing in holiness through a witness of mercy,” adding that he had also tried to follow the pope’s call to “make a stir.”

Pope Francis praised Maciej Ciesla for having “sowed hope” by having “the courage to continue fighting even in the worst conditions.”

“Preparing a World Youth Day is an adventure — people laugh, work, do things and are then dismissed, but the adventure is one of generosity,” the pope told organizers and volunteers.

The pope, who asked young participants to pray for him, left Krakow’s John Paul II International Airport aboard a LOT Polish Airlines 787 Dreamliner, without making a departure speech.

A military band at the airport, which was soaked with streams and puddles after a heavy afternoon rain, played Frank Sinatra’s “I Did It My Way” and “We Are the Champions” by British pop group Queen.

NEXT: Teach your elders well: Pope calls youths to be models for adults