New Vatican panel will study ministry of women as deacons 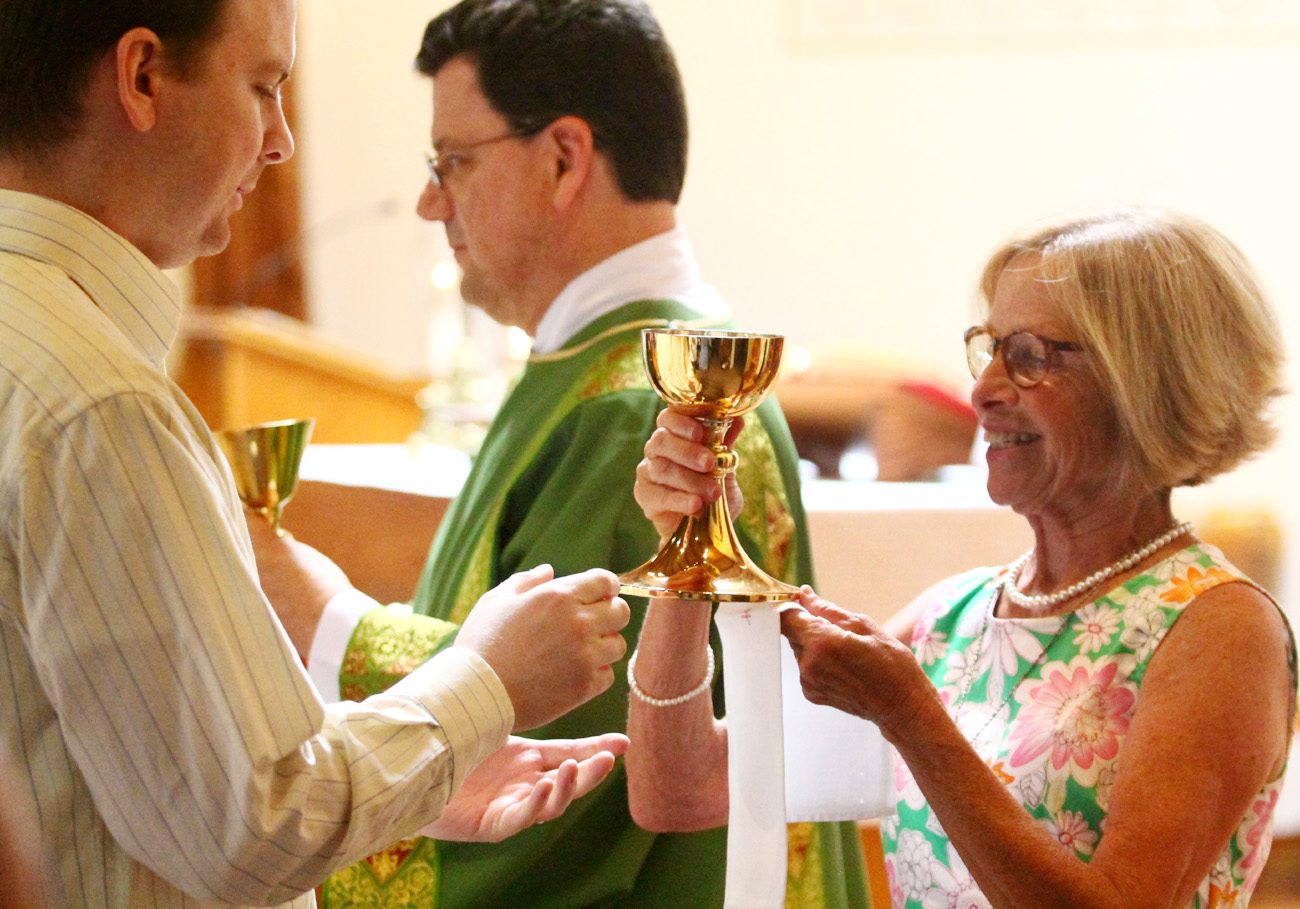 Suzette Moyer, an extraordinary minister of holy Communion, offers the Blood of Christ during during Mass July 16 at St. Mary Church, Schewnksville. Permanent Deacon Donald O. Nichols also distributes Communion. A new Vatican commission will look at the ministerial role of women in the early Christian church, with possible implications for roles in the church today. (Photo by Sarah Webb)

VATICAN CITY (CNS) — Pope Francis has appointed six men and six women to a commission to study the issue of women deacons, particularly their ministry in the early church.

In addition to the 12 members named Aug. 2, the pope tapped Archbishop Luis Ladaria Ferrer, secretary of the Congregation for the Doctrine of the Faith, to serve as president of the commission.

The pope set up the commission at the request of the International Union of Superiors General, the organization for the leaders of women’s religious orders around the world. Meeting the group in May, Pope Francis said that while his understanding was that the women described as deacons in the New Testament were not ordained as male deacons are today, “it would be useful for the church to clarify this question.”

The International Theological Commission, a body that advises the doctrinal congregation, included the question of women deacons in a study on the diaconate almost 20 years ago. While its report, issued in 2002, did not offer recommendations for the future, it concluded that biblical deaconesses were not the same as ordained male deacons.

In June, Pope Francis told reporters that he had asked Cardinal Gerhard Muller, prefect of the doctrinal congregation, and Sister Carmen Sammut, president of the superiors’ group, to suggest scholars to include in the study group.

At least one of the members Pope Francis named to the commission — U.S. scholar Phyllis Zagano — has written extensively on the role of women deacons in the early church, arguing that they were ordained ministers and that women can be ordained deacons today. Zagano is a senior research associate in the religion department at Hofstra University in Hempstead, New York.

Zagano told Catholic News Service she learned of the appointment through emails from friends and that she was “happy for the church.” She said she knew some of the people named to the commission but was not familiar with their writings on women in the diaconate.

“It appears to me that this is an opportunity for the church to discuss whether women can be restored to the ordained diaconate,” she said.

Another U.S. scholar also is among the 12 commission members: Augustinian Father Robert Dodaro, president of the Pontifical Augustinian Institute in Rome and a professor of patristic theology specializing in the works of St. Augustine.

The other members of the commission are:

— Spanish Sister Nuria Calduch-Benages, a member of the Missionary Daughters of the Holy Family and member of the Pontifical Biblical Commission.

— Italian Msgr. Piero Coda, a professor of systematic theology and member of the International Theological Commission.

— Father Karl-Heinz Menke, retired professor of dogmatic theology at the University of Bonn and member of the International Theological Commission.

— Jesuit Father Bernard Pottier, professor at the Institute of Theological Studies in Brussels and member of the International Theological Commission.

— Marianne Schlosser, professor of spiritual theology at the University of Vienna and member of the International Theological Commission.

Contributing to this story was Gregory A. Shemitz in Hempstead, New York.

PREVIOUS: Teach your elders well: Pope calls youths to be models for adults

NEXT: Take another look at ‘Amoris Laetitia,’ Canadian cardinal urges