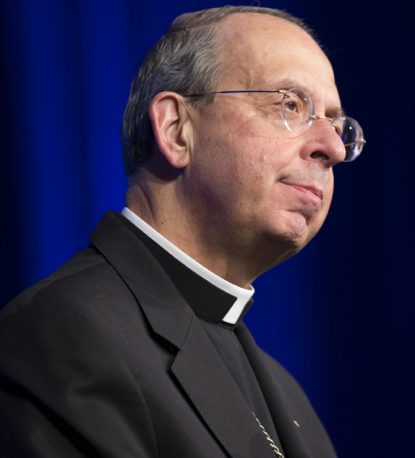 “Statements painting those who support religious freedom with the broad brush of bigotry are reckless and reveal a profound disregard for the religious foundations of his own work,” said Archbishop Lori of Castro in a Sept. 13 statement.

Archbishop Lori, chairman of the U.S. bishops’ Ad Hoc Committee for Religious Liberty, said the notion that people of faith are “comparable to fringe segregationists from the civil rights era” is a “shocking suggestion.”

Castro made the statements as part of the U.S. Commission on Civil Rights’ 306-page report, “Peaceful Coexistence: Reconciling Nondiscrimination Principles With Civil Liberties.” Originally scheduled for issuance in 2013, its release was delayed until Sept. 8 — and even then, two on the seven-member commission dissented from its findings.

In his statement, Castro said, “The phrases ‘religious liberty’ and ‘religious freedom’ will stand for nothing except hypocrisy so long as they remain code words for discrimination, intolerance, racism, sexism, homophobia, Islamophobia, Christian supremacy or any form of intolerance.”

Elsewhere in his statement, Castro said, “Religious liberty was never intended to give one religion dominion over other religions, or a veto power over the civil rights and civil liberties of others. However, today, as in the past, religion is being used as both a weapon and a shield by those seeking to deny others equality.”

“The phrases ‘religious liberty’ and ‘religious freedom’ will stand for nothing except hypocrisy so long as they remain code words for discrimination, intolerance, racism, sexism, homophobia, Islamophobia, Christian supremacy or any form of intolerance.” — Martin Castro, chairman of the U.S. Commission on Civil Rights.

It was those two statements with which Archbishop Lori took greatest issue in his own statement, which never mentioned Castro by name.

“People of faith have often been the ones to carry the full promise of America to the most forgotten peripheries when other segments of society judged it too costly. Men and women of faith were many in number during the most powerful marches of the civil rights era,” he said.

“Our record is not perfect. We could have always done more,” Archbishop Lori added. But “the idea of equality, which the (civil rights commission) chairman treats as a kind of talisman, is incomprehensible apart from the very faith that he seeks to cut off from mainstream society.”

Archbishop Lori said, “The vast majority of those who speak up for religious liberty are merely asking for the freedom to serve others as our faith asks of us. We ask that the work of our institutions be carried out by people who believe in our mission and respect a Christian witness.

“Today, Catholic priests, religious and laity can be found walking the neighborhood streets of our most struggling communities in places abandoned by a ‘throwaway culture,'” Archbishop Lori.

In a rebuttal to Castro in the “Peaceful Coexistence” report, Commissioner Peter Kirsanow noted that prominent religious leaders were “in the forefront of the civil rights movement.” He also said he found it “especially puzzling” that the commissioner singled out Christianity.

“At first I thought he surely meant to identify for opprobrium religions in addition to Christianity,” wrote Kirsanow. “But, as it happens, his venom is directed against American Christians past and present. … In criticizing Christianity in regard to Islam and slavery, the chairman fails to recognize that Islam’s ties to slavery are at least as deep as those of Christianity.”

One of the five recommendations the commission made to President Barack Obama said that “overly broad religious exemptions unduly burden nondiscrimination laws and policies. Federal and state courts, lawmakers, and policymakers at every level must tailor religious exceptions to civil liberties and civil rights protections as narrowly as applicable law requires.”

The other four recommendations dealt with tailoring and clarification of the 1993 Religious Freedom Restoration Act, two of them to ensure that they “do not unduly burden civil liberties and civil rights protections against status-based discrimination.”

Commissioner Gail Heriot dissented from Castro’s statement and the report itself saying that RFRA sets a “very tough standard, tougher than many would have liked. But it is the course Congress has taken.”

RFRA prohibits the federal government from substantially restricting a person’s religious freedom, except when it can demonstrate “a compelling government interest” and that the government’s action is “the least restrictive means” of furthering that interest.

“Under it, federal laws and other actions — including anti-discrimination laws — are to be interpreted to bend over backward to protect religious liberty, not lean in the direction of minimizing the scope of religious liberty exemptions,” Heriot said.