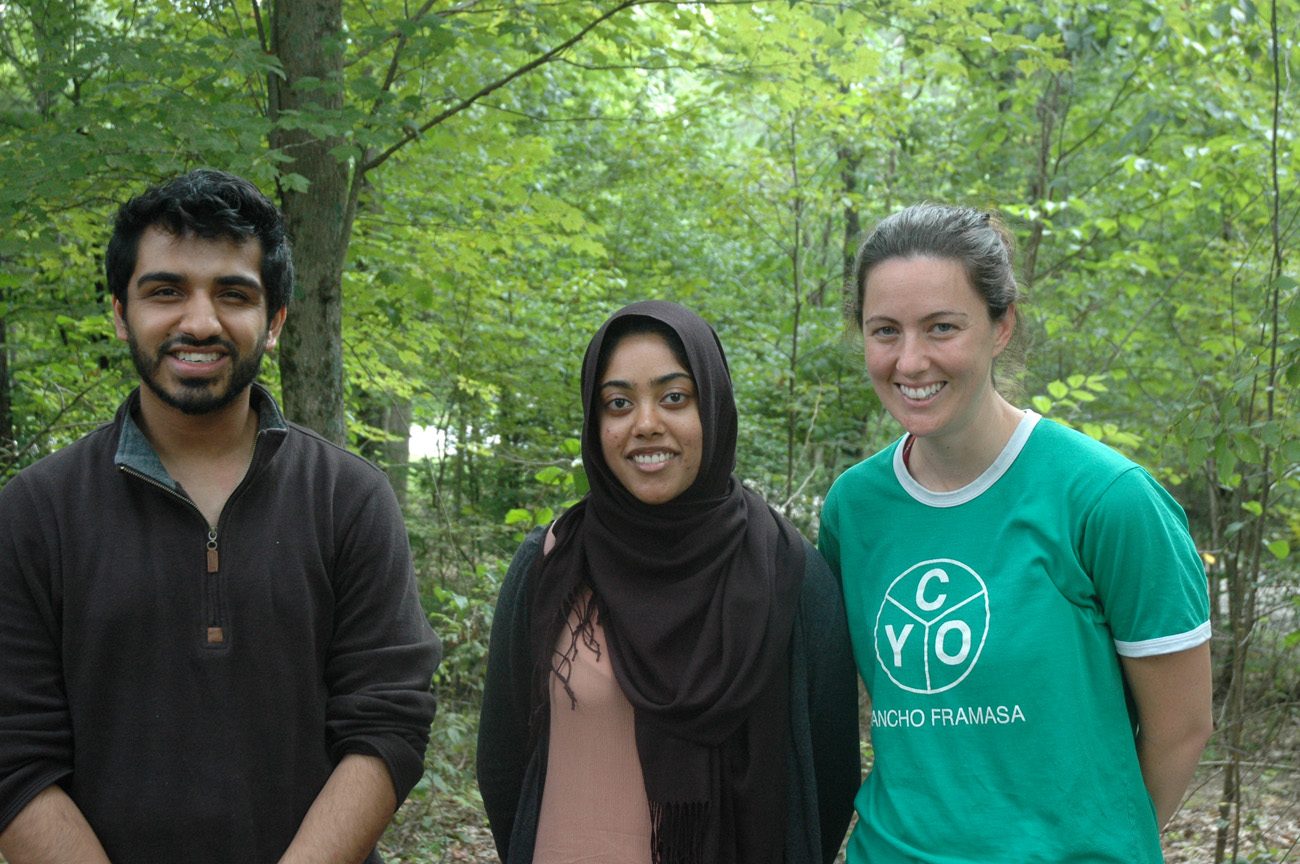 From left, Muslims Uzair Siddiqui, 23, and Fariha Hossain, 21, pose for a photo at Camp Rancho Framasa in Nashville, Ind., with Anne Taube, 30, a Catholic who is the camp's assistant director. In early August the camp was the setting for about 150 Muslim youths from across the country to enjoy a week of swimming, canoeing, climbing and learning about their faith as well as the Catholic faith. (CNS photo/John Shaughnessy, The Criterion)

NASHVILLE, Ind. (CNS) — The smiles spread spontaneously, creating the kind of infectious joy that immediately connects people, no matter their backgrounds or faiths.

The young Muslim Americans who spent a week in the summer swimming, canoeing, climbing and learning more about their faith at the Catholic Youth Organization camp in Nashville also wanted to learn a special song from the young Catholics who were their lifeguards, canoeing guides and climbing instructors.

The young Muslims noticed the words to “The Great Amen!” song etched on a wall of the dining hall at the Indianapolis Archdiocese’s Camp Rancho Framasa. Catholic campers for years and years have ended their prayers with the lyrics, “Amen! H-A-P-P-Y! Yeah, God!” — followed by singing “Amen!” over and over again.

So at a final campfire, the young Catholics taught some of the young Muslims the right way to sing the song, and the woods filled with a loud, joyous, continuing chorus of “Amens!”

The smiles lasted even longer.

“That was great,” recalled a smiling Fariha Hossain, a 21-year-old Muslim who was one of two main advisers for the camp.

“That was cool,” said a smiling Anne Taube, a 30-year-old Catholic who is assistant director of Camp Rancho Framasa.

When Kevin Sullivan was approached by the Muslim Youth of North America about having its annual summer youth camp this year at Rancho Framasa, the co-director of the CYO camp knew that it was “fairly common in the camping industry” for an organization to “rent” a camp and have the camp staff provide meals, housekeeping, lifeguarding and other services.

He also knew the dates that the Muslim Youth organization requested — Aug. 5-11 — came after the end of the CYO camp’s regular summer schedule, so he didn’t hesitate to welcome the group. He viewed it as an opportunity for collaboration between the two faiths.

“We all need that today,” Sullivan told The Criterion, Indianapolis archdiocesan newspaper. “As Catholics, we are all raised to believe that our church is welcoming and is the first to reach out. We tell our staff over and over that our relationships with anyone who comes through our camp are changing the world. With that in mind, why wouldn’t we want their group to be present with us?”

Such a welcoming embrace hasn’t always been a guarantee at previous camps across the country, say the leaders of the Muslim youth camp.

“We have had negative experiences with camp sites where a local community came to the gates of the camp and protested why there was a Muslim camp,” said Uzair Siddiqui, 23, who was a co-camp adviser. “This camp has been the exact opposite. There have been many smiles and a lot of opportunities for the campers to interact with the staff.”

The interactions left lasting impressions on the 150 Muslim campers, their 21 Muslim counselors and the Catholic staff who helped them that week. The campers who came from as far away as Florida, Texas, California and Canada.

Scott Hartman, the CYO camp’s program manager who helped and interacted with the Muslims youths — ages 12 to 18 — as they swam, canoed and tackled the high-ropes challenge. He was struck by how the youths followed a schedule of praying five times a day during camp — and how they prepared to pray each time.

“They wash their hands and face before they pray because they believe they’re talking one on one with God — which I believe, too — but I haven’t always been concerned about my appearance when I do,” Hartman said.

“Learning about their culture and religion has been the best part for me. We got to pray together at the first meal,” he added. “They asked God to bless the food and protect us from harm. I could agree with everything in their prayer.”

Taube had a similar reaction as she watched a group of campers perform a skit in which two of the youths were cast as Taylor Swift and Kanye West, two popular celebrities who have had conflicts.

“Their point was how we spend a lot of our energy focusing on celebrity drama instead of focusing on God,” she said. “There are a lot of similarities in how they teach their faith.”

The interaction with the Catholic staff members also was valuable for the Muslim campers.

“It’s a great opportunity for us to learn we aren’t different,” said Siddiqui. “One of the passages in the Quran (the central religious text of Islam) is that God has created mankind simply to get to know one another. And from that, to build bridges.”

Shaughnessy is the assistant editor of The Criterion, newspaper of the Archdiocese of Indianapolis.

NEXT: Catholics, other Christian leaders ask politicians to address immigration