Notre Dame event with Ginsburg focuses on her life, not court decisions 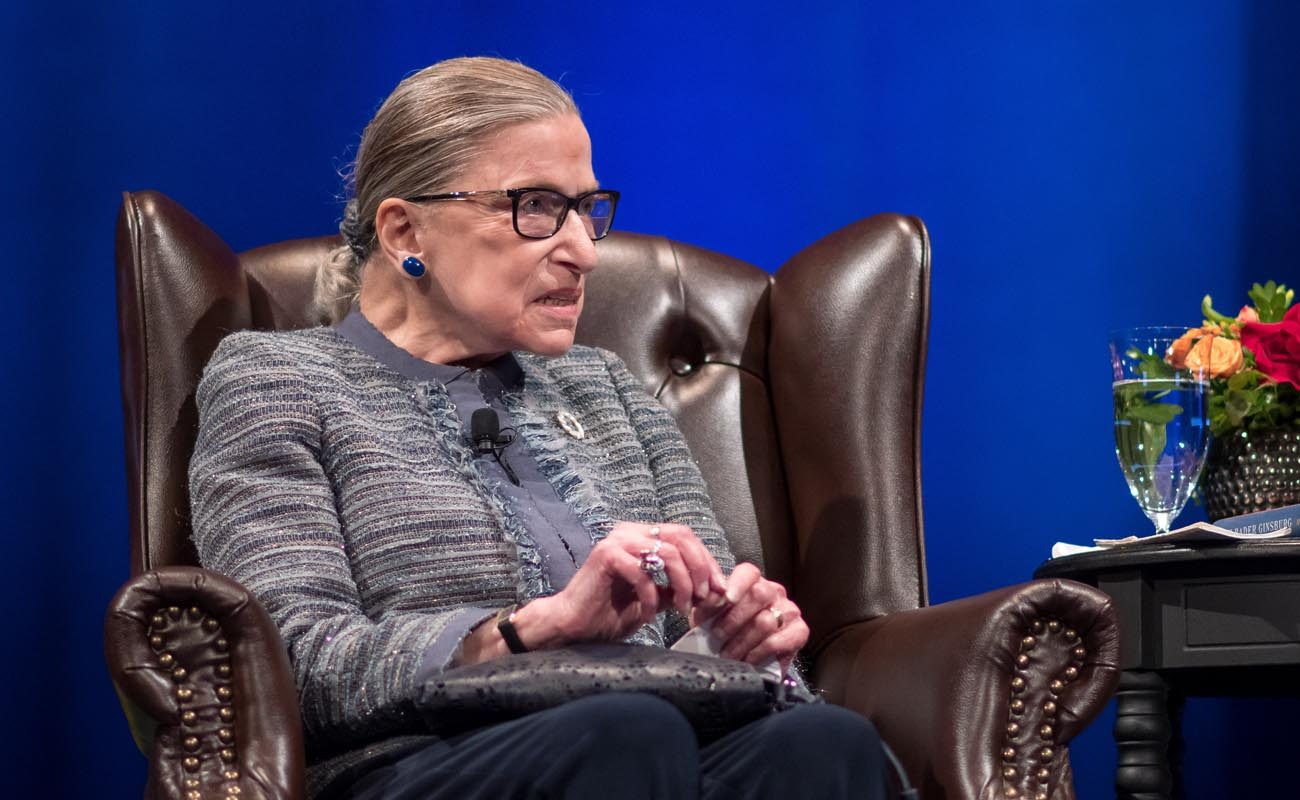 NOTRE DAME, Ind. (CNS) — In a visit to the University of Notre Dame Sept. 12, Supreme Court Justice Ruth Bader Ginsburg steered away from abortion, same-sex marriage and other major issues and instead focused on her hope to find common ground.

“Someday there will be great representatives on either side of the aisle who will recognize that they cannot represent the United States very well if they are trying to work in conflict instead of in harmony,” she said.

She was on campus to engage in a public conversation with U.S. Court of Appeals Judge Ann Claire Williams, a Notre Dame alumna and trustee. The event was hosted by the university’s Office of the President.

In Purcell Pavilion, packed with an estimated 7,500 guests, Williams facilitated a conversation highlighting the challenges and triumphs Ginsburg has experienced throughout her personal and professional life.

Ginsburg’s hope for harmony has not softened her ideological positions that some Catholic commentators have described as “extreme.” She has been a steadfast supporter of same-sex marriage, which the Catholic Church opposes, and was part of the majority in the court’s decision legalizing such marriages in 2015. She also supports keeping abortion legal.

Most recently, she voted with the majority June 27 in the Supreme Court’s 5-3 ruling decision to strike down restrictions on Texas abortion clinics in Whole Woman’s Health v. Hellerstedt. The Texas law required new safety standards for clinics and said clinic doctors had to have admitting privileges at nearby hospitals.

The high court said such regulations were medically unnecessary and unduly obstructed what the law says is a woman’s right to an abortion.

In a July interview with The New York Times, Ginsburg said the ruling sets the precedent that “no laws that are meant to deny a woman her right to choose” will be upheld as constitutional.

When asked by a Notre Dame student how Ginsburg keeps her own biases from influencing her opinion before arguments are presented before the court, she said she approaches each case with a new set of eyes.

“I am informed in my thinking first by what others have said about this problem, then what the lawyers have argued, then with the research I do with the aid of my law clerks,” she said.

Williams, who was appointed to the 7th U.S. Circuit Court of Appeals in 1999, told the audience that Ginsburg has been one of her professional mentors.

Much of the talk was biographical, walking the audience through Ginsburg’s struggles and accomplishments, particularly her fight for women’s rights. Ginsburg said she was driven by a vision not only for her future, but for the future of her country in which the dreams of women could include the professional opportunities most commonly afforded to men.

“It’s probably hard for an audience of this age to appreciate what the law was like in the ’60s and even into the ’70s,” said Ginsburg, who was the second woman appointed to the Supreme Court, after Sandra Day O’Connor.

“People were classified two ways: either you were a bread winner or you were responsible for the home and raising children. So if the woman was a bread winner, it was hard for her,” she said.

She shared anecdotes from her life, including a conversation she had with on her wedding day with her soon-to-be mother-in-law. She gave the future justice earplugs as a wedding gift, telling her: “I’d like to tell you the secret of a happy marriage. … It helps every now and then to be a little deaf.”

“That was such good advice, I follow it today with my colleagues on the Supreme Court,” she jokingly added.

The two-hour event concluded with a pre-planned question-and-answer session and the performance of an opera piece celebrating Ginsburg’s life.

Afterward, Frederick Everett, an attorney and director of the Office of Family Life for the Diocese of Fort Wayne-South Bend, told Today’s Catholic, the diocesan newspaper, that some feel that a person like Ginsburg, with “a long record of advocating positions contrary to Catholic teaching on human dignity and the common good, should not be invited to speak at a Catholic university.

“I don’t share that view,” he said. “I think that if an event is carefully structured, students can benefit from learning why people believe what they believe and seeing how their biases can be understood in the context of their life experiences.”

“Unfortunately, in this case,” he continued, “I think the students were done a great disservice since the event was structured more as a lighthearted celebration of her life and career, rather than a serious exploration of her positions and their genesis.

“For those who promote the rights of human beings at all stages of life, including the freedom of religion, this was a missed opportunity.”

Everett added that Ginsburg may be well-intentioned but she “has done this nation great harm by misusing the Constitution … to impose her own ideological positions, such as her support of a fundamental right to abortion through all nine months of pregnancy — including even partial-birth abortion.”

Gettinger is on the staff of Today’s Catholic, newspaper of the Diocese of Fort Wayne-South Bend.