Australian bishops: Reject ageism, ‘old age will come to us all’ 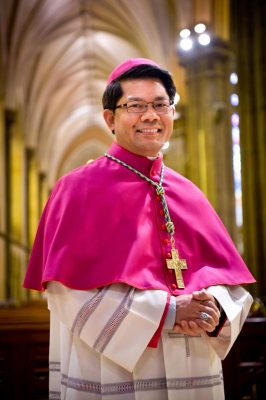 SYDNEY (CNS) — Australia’s bishops called on individuals, communities and governments to reject rampant ageism and the toxic attitudes that often accompany concepts such as “intergenerational theft.”

The bishops link Australia’s treatment of the elderly with Western discomfort around dying and point to the looming threat posed by euthanasia and assisted dying in a society that “idealizes notions of youthfulness and vitality.”

Calling for a “renewed solidarity among generations, young and old” — not only in wider society but also in the church — the bishops point out a number of challenges confronting Australia as a country with a rapidly aging population.

Their 2016-17 social justice statement, “A Place at the Table: Social Justice in an Ageing Society,” was released in anticipation of Social Justice Sunday Sept. 25.

This bishops point to recent survey data showing a quarter of people over 50 had experienced some form of age-based discrimination in calling for greater workplace flexibility for older people, and for increased training, particularly in lieu of increased automation.

The document also surveys the consequences of caring for children on women’s retirement savings and grandparents’ emotional and financial stress when caring for their grandchildren, often out of their own families’ financial necessity.

Writing in a summary message in the report, Bishop Vincent Long Van Nguyen, social justice council chairman, said stereotypes of older people as “doddering, out of touch or (necessarily) dependent” were “false and dehumanizing.”

“People are not commodities, to be valued only for their productivity or purchasing power,” Bishop Long said in the message. “They are human beings in the fullest sense, precious in their own right, possessing a dignity that was given them by God. Furthermore, their wisdom and lived experience are priceless treasures that can enrich our lives.”

“Old age will come to us all eventually, and we will need the help and support of others,” he said.

“We must never forget that the older person before us is a spouse, a parent, a brother or sister, a friend, and most importantly, a son or daughter of God. All of us are created in the image and likeness of God and are called to have our rightful place at the table he has prepared.”

“A Place at the Table” comes several months after an Australian Broadcasting Corp. report showing candid footage of a caregiver attempting to suffocate an 89-year-old man with dementia at a Japara Healthcare-owned nursing home in Adelaide.

Borrowing a quote from the Council on the Aging, the bishops refer to isolation as “the great enabler of abuse,” noting that an estimated 20 percent of older Australians are affected by social isolation and are vulnerable to ill treatment in family and institutional settings.

“The marketization of the aged care sector brings some key challenges; it is not simply a business, and older people are not just another market,” the bishops wrote.

“It is vital that we recognize aged care as an essential community service.”

The document also calls on governments to ensure the adequacy of government entitlements to older Australians according to human dignity, calling for a cross-community strategy for “positive aging.”

Addressing the church, the bishops called on young people to recognize in older people a wealth of experiences and wisdom, while asking older Catholics, “What will you bring to the table?”

In a lengthy section titled “Protecting people at the end of life,” the bishops point to their own efforts to give people peace of mind by creating their own advanced care directives.

“Consumerism promotes a flawed and deceptive notion of family in which no one grows old, there is no sickness, sorrow or death,” they said.

“Our society idealizes notions of youthfulness and vitality, and so the reality of the journey from an active lifestyle to one of dependence and declining health is often glossed over or denied. Even the laudable notions of ‘active’ and ‘healthy’ aging may mask the reality of our own death and dying,” they said.

The bishops recalled Pope Francis’ warnings against phrases like “quality of life,” which make people think that lives affected by grave illness are not worth living.

“‘Dying with dignity’ is one such insidious phrase. It claims to be an act of compassion for those who are dying, but actually entails the deliberate taking of a person’s life,” the bishops said. “Missing altogether in this phrase is the deeper human call to dignify those who are dying by accompanying them in their final journey in life.”

In a Sept. 14 statement to U.N. Human Rights Council in Geneva, Archbishop Ivan Jurkovic, the Vatican’s permanent observer to U.N. agencies in Geneva, indicated the problem of an aging population is worldwide.

“In a world that is living a critical demographic transformation, the elderly face a number of particular challenges … that need to be addressed urgently,” he said, citing areas such as health care, the right to work, social protection, access to justice, violence and abuse, and increasing discrimination.

“Living longer must never be seen as an exception, a burden or a challenge, but rather it must be recognized as the blessing that it is. Older persons enrich society, and their positive and constructive presence in society is valued. The elderly are a source of wisdom and a great resource. The quality of a society, of a civilization, may also be judged by how it treats its elderly and by the place reserved for them in communal life,” he said.

Hiini is a reporter for The Catholic Weekly, newspaper of the Archdiocese of Sydney.

NEXT: Doctor of mercy is in: Pope’s hospital visit bolsters worried parents