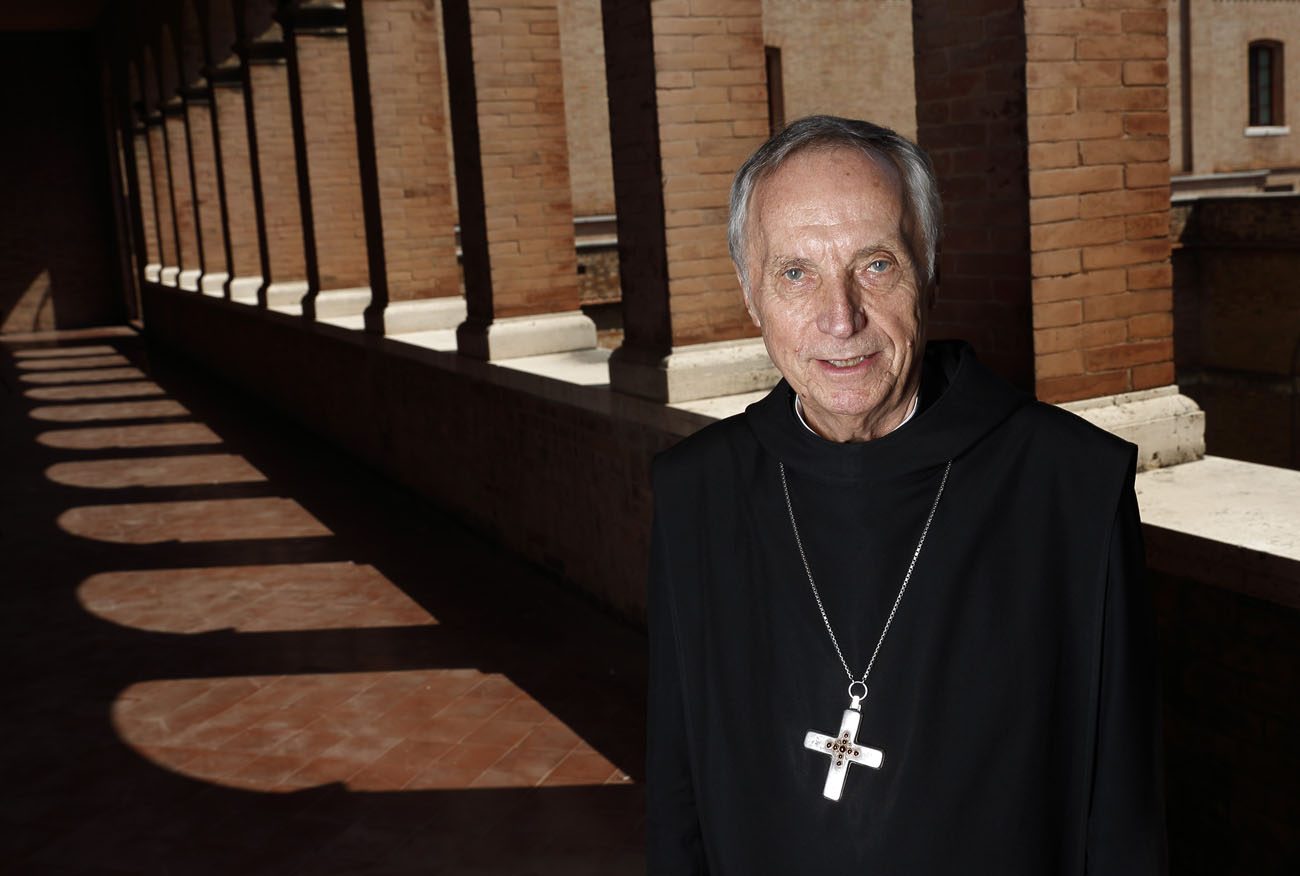 Abbot Primate Notker Wolf, superior of the Benedictine order, is pictured at St. Anselm Abbey in Rome Sept. 1. The heads of Benedictine monasteries are meeting in Rome Sept. 3-16 to elect a new abbot primate. Abbot Wolf has served in the role since 2000. (CNS photo/Paul Haring)

Ending his third and final term as leader of the confederation of Benedictine monasteries, the 76-year-old German monk also plays in a rock group, named Feedback, in his spare time, and performs classical and sacred music on flute.

A best-selling author, too, Abbot Wolf said he had seen his volume, “What Are We Waiting For? Heretical Thoughts on Germany,” piled high next to a stack of Dan Brown’s “The Da Vinci Code,” at the Munich airport’s newsstands.

It’s not unusual to find monks pursuing such aesthetic or eclectic endeavors because they embrace creativity, he told Catholic News Service.

Having people from different backgrounds living, talking, working and praying together means “you are rather creative, I would say, in a monastery,” he said.

But it also “shows that Christianity is at the roots of human culture,” which means “it’s so normal, so natural” that the Benedictine order’s excellence in education, music, historical preservation or agriculture goes hand in hand with trying to live out the Gospel.

Committed to serving God and his creation, “Benedictines are close to nature,” Abbot Wolf said.

For example, St. Ottilien Archabbey — his home monastery in Bavaria where he will return after living in Rome since 2000 as abbot primate and head of St. Anselm College — turns the manure from its 180 dairy cows into biogas, which they then sell to the local power company.

There are some 250 monasteries of Benedictine men throughout the world, each one with its own culture, traditions and activities. The important thing, he said, is that whatever the communities are doing, “we are doing it out of love for Christ.”

At the Congress of Abbots Sept. 3-16, abbots and conventual priors from each of those monasteries were meeting at St. Anselm Abbey in Rome to elect a new abbot primate.

The abbot primate lives in Rome to serve as a liaison between the pope and the Benedictine monasteries, as well as directing St. Anselm Abbey, serving as chancellor of the Pontifical University of St. Anselm and running the residence where 120 monks from 40 nations live.

The abbot primate, he said, has no jurisdiction over other monasteries, which are all independent and follow their own traditions and cultures.

“I can’t tell superiors, abbots what they can do,” he said, but he attends their national meetings to help build unity and collaboration among the order’s far-flung communities.

Abbot Wolf said the Rule of St. Benedict helps bring balance to one’s life. While much of his work required lots of meetings and extensive traveling, “I know where I am rooted.” Common prayer with his brothers, the Eucharist and the liturgy are “my anchor,” he said.

The strong contemplative nature of the Benedictine life doesn’t mean the monks shut their eyes to the world’s needs, he said.

“I think just to praise the Lord in church and see people dying” without being moved to respond is not following the Gospel, he said. “We have to do something.”

For today’s Benedictine monks and nuns, St. Benedict’s sixth-century rule means living out the Gospel together. It’s a communal and constant team effort, he said, like a soccer or baseball squad would require, only here “you are training mutual love, training charity.”

Community life is not easy, he said, but it is there “you can show you are a real Christian, to stand back and give the other the chance to live” in a generous, give and take of communal living.

Over the decades, he said he has seen a positive “change of mentality” in Benedictine communities, which suffered from what he called an “interpersonal crisis.”

Monastic living was thought to entail fulfilling rules and regulations without taking care “of how the other person, your neighbor, is feeling,” he said.

“But now they are taking care of themselves and the community” so they can still have “a sober community, but also a heartfelt living together.”

This heartfelt hospitality also extends to everyone, he said.

When guests visit a monastery, he said, “they are also there looking for people with whom they can talk to about their life. They have a quiet place where they may discover again the sense of their life, come back to their roots and to eventually find their roots in God.”

PREVIOUS: Retired pope says governance wasn’t his gift, but Francis is good at it

NEXT: Religions must take lead in protecting creation, pope says