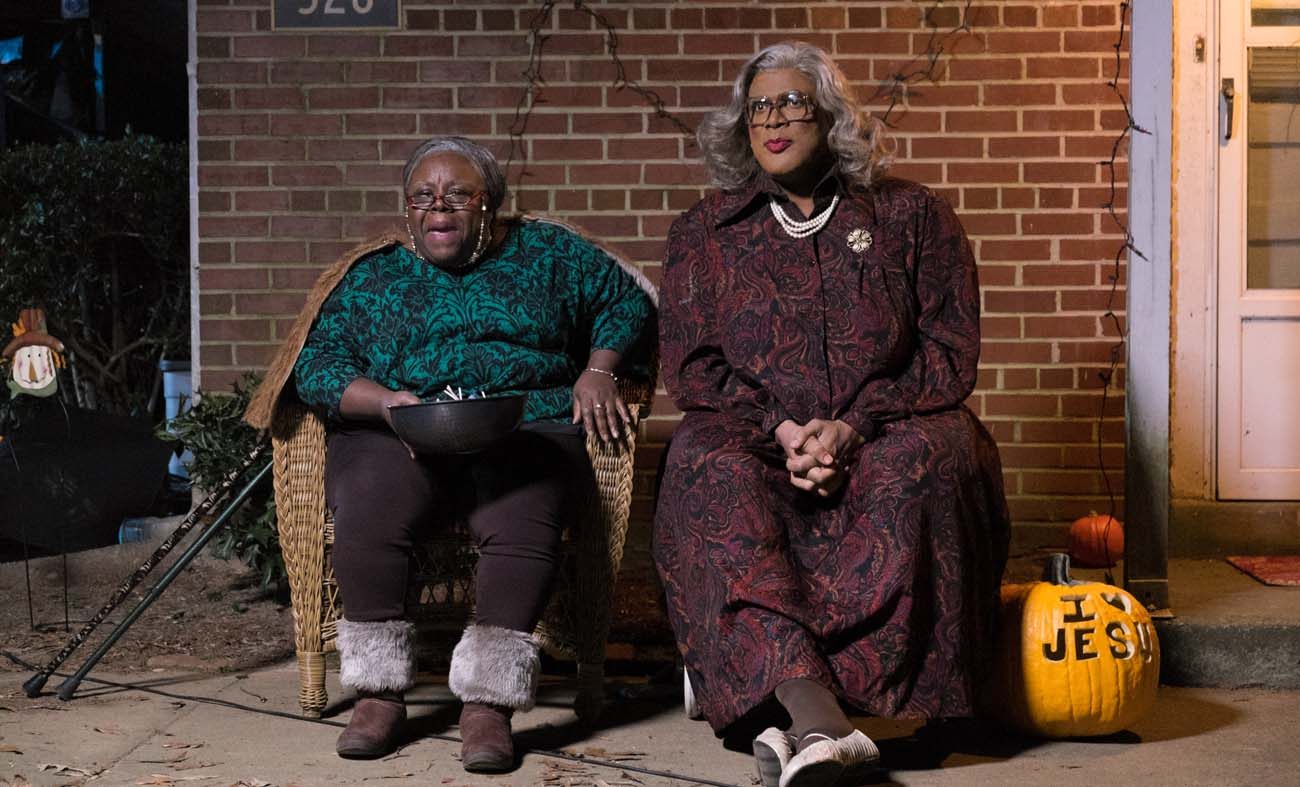 Cassi Davis and Tyler Perry star in a scene from the movie "Boo! A Madea Halloween." (CNS photo/Lionsgate)

NEW YORK (CNS) — Going by “Boo! A Madea Halloween” (Lionsgate), Tyler Perry may be getting a little bored with his signature character.

The language-fracturing violence-threatening moral force in a muumuu still gives out with the bickering and the lightning-fast asides. But writer-director Perry’s script gives her little to do other than mingle with college students and trash-talk with her elderly friends.

There are no shocks left in the old gal, except maybe her references to her past as an exotic dancer “on the pole.” So this is a film best appreciated by die-hard Madea completists who won’t mind that the plot is too casually constructed.

Madea’s nephew Brian (Perry) asks his fabled aunt (also Perry, of course) to look after his daughter Tiffany (Diamond White) on the Eve of All Hallows (in Madea-speak, “Holler-een”). Tiffany, who’s a voluptuous 17, wants to sneak out to a nearby fraternity party with two older friends.

She achieves this, of course, giving Madea the opportunity to intervene in her famous Cadillac, show off a few dance moves and leer at the guys. But once the hosts discover Tiffany’s real age, they don’t want her around, and Madea is tossed out as well.

So the storyline turns to pranking by the frat boys, and eventually there are strange noises, spirit-world threats written on a bathroom mirror, and the old folks launch into haunted-house shtick — in between complaining about their physical ailments and the indignities of age.

Madea, it turns out, is just as afraid of the police (“The po-po”) as she is of ghosts. But this potentially timely, possibly controversial theme is not explored in any depth.

Bam, who offers to call the authorities in Madea’s stead, does announce that she’ll get them to turn up because she can sound like a young white girl over the phone. Yet Bam’s real goal is to tweak the cops by triumphantly producing her medical-marijuana prescription card.

As in all Madea stories, much is made of the beneficial effects of corporal punishment and the need for the young to respect their elders. With regard to the former topic, the hammer-wielding harridan observes, “A little love-tap never hurt no one.”

The film contains occasional nonlethal violence and marijuana use. The Catholic News Service classification is A-III — adults. The Motion Picture Association of America rating is PG-13 — parents strongly cautioned. Some material may be inappropriate for children under 13.

NEXT: ‘Monsters’ may be one of your favorite things