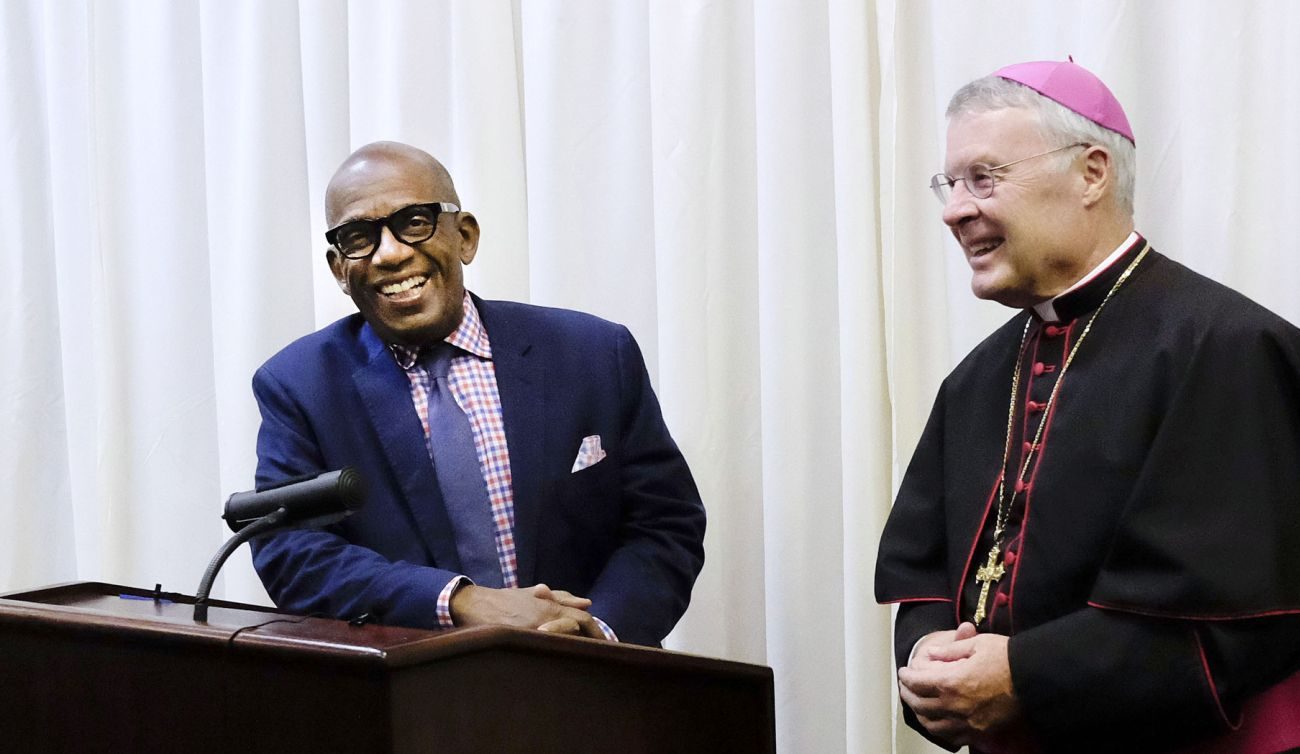 SIOUX CITY, Iowa (CNS) — Al Roker, weather and feature anchor on NBC’s “Today” show, told a Sioux City Catholic audience that he owes his success in life and his career to the Catholic education he received growing up.

“I am standing here today, as the ‘Today’ show weatherman, because of what I learned at Xavier High School,” Roker said. “My Jesuit priests, my Jesuit teachers taught us to be curious, taught us to be free thinkers, to be compassionate and they also instilled an interest in the arts.”

Roker received a full scholarship to Xavier High School, “a Jesuit military academy,” in Manhattan, he quipped during his keynote speech at the Sioux City Diocese’s annual fundraiser for Catholic schools in late September.

Though he doesn’t speak at many events, Roker said speaking at the Bishop’s Dinner for Catholic Schools meant something to him. “Support for Catholic schools is very important. If you can do something to help, that’s a good thing. I am thrilled to be here.”

Roker is the oldest of six children who grew up in the New York borough of Queens. His father was a bus driver and his mother was a homemaker. He attended St. Catherine of Siena Elementary School in Queens.

“We moved from Brooklyn to Queens because my parents wanted us to have a home and a good education,” said Roker. “After six months in the public schools, they decided they wanted us to go to a Catholic school. At the time, it was my brother, myself and two sisters.”

He said one of the people who was influential in his life was Sister Emanuela, a Dominican nun.

“She just passed away about five years ago at the age of 95 years old,” said Roker. “She believed in her students. I think teachers are called to this job because they want to help and they believe in what they do. I believe Catholic school teachers take that even one step further, whether they are part of a religious order or a lay teacher.”

The dinner raised $150,000 this year, which was $30,000 more than last year, according to Kristie Arlt, diocesan director of communications and stewardship.

“That money goes right back to our schools,” she told the dinner attendees. “Textbooks, technology and teacher education are the three things you are supporting by being here tonight. If we didn’t have this money, we would be in trouble.”

The 20th annual dinner opened with an invocation by Father Ed Girres, pastor of St. Cecilia Church in Algona.

“We thank you for the gift of the Catholic schools of the Diocese of Sioux City where the message of your life, death and resurrection is proclaimed, Christian community is experienced, service to our brothers and sisters is modeled and worship of you is cultivated,” he prayed. “Increase our zeal for ensuring all children and families can benefit from a high quality Catholic education.”

Dan Ryan, superintendent of Catholic schools, recognized more than 150 teachers, administrators and staff who have “dedicated 20 plus years of service to our schools.”

It was the 10th dinner for Sioux City Bishop R. Walker Nickless, who was named by Pope Benedict XVI to head the diocese in November 2005.

“I am truly blessed as your bishop to have dedicated educators teaching our young people,” said the bishop said in concluding the evening. “I pray for you and your work every day and for everyone in this room because of the great appreciation we have for your efforts.”

Borkowski writes for The Catholic Globe, newspaper of the Diocese of Sioux City.

PREVIOUS: Archdiocese, evangelicals agree to work together to prevent abortion

NEXT: Bishops to vote for USCCB president, vice president at general assembly