Catholics warn against new rules on religion in China 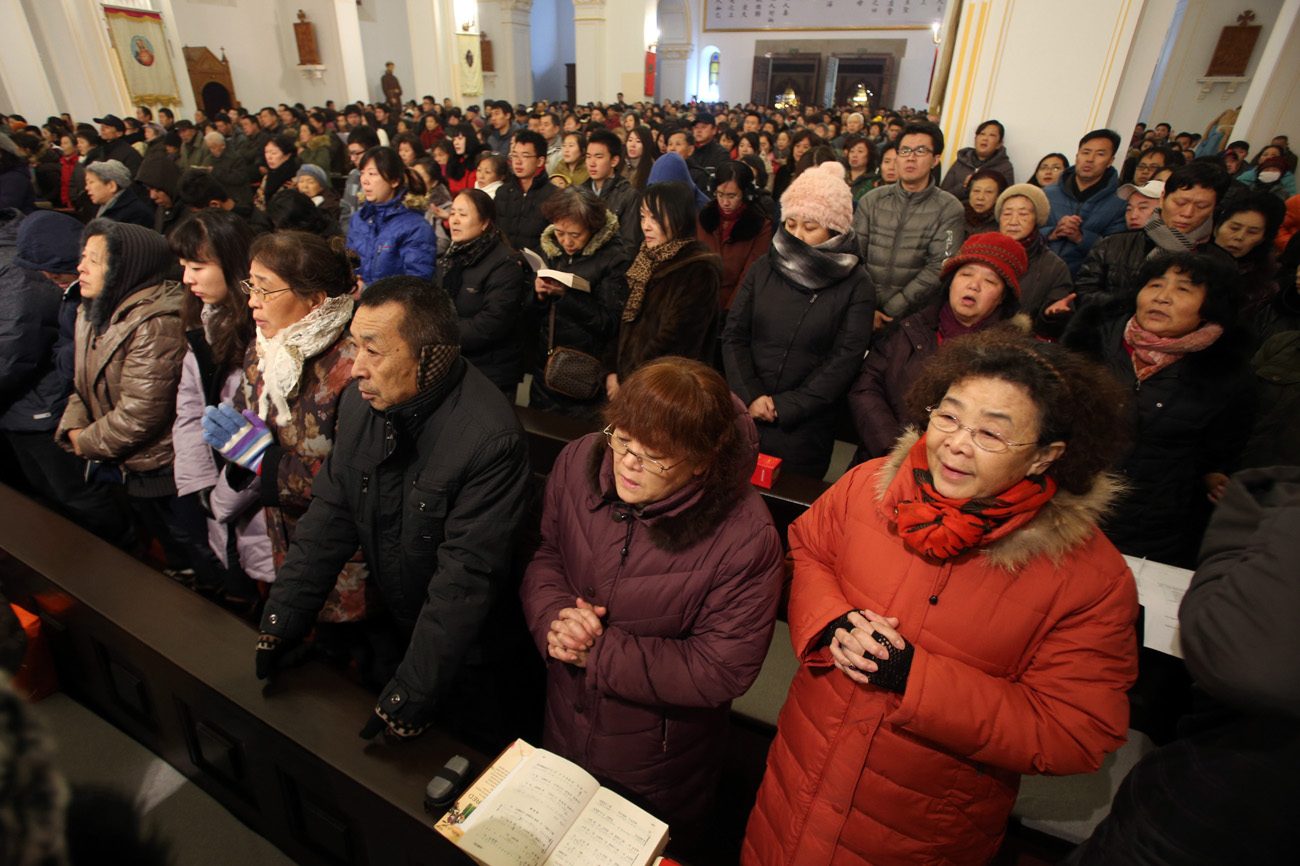 People pray during a 2013 Mass in Qingdao, China. Catholic experts have warned that new rules on religion in China could severely hamper the church's work. (CNS photo/Wu Hong, EPA)

“Compared with previous drafts, these regulations are more restrictive, since they include references to national security,” said Anthony Lam, executive secretary of the Holy Spirit Study Centre of Hong Kong’s Catholic diocese.

“They may not make a great difference for China’s underground Catholic church, since it’s illegal anyway. But they’ll have a great impact on the church’s open community, which has to report everything to the government.”

China’s government was set to approve the draft regulations and implement them Oct. 7. The 74-article text, published Sept. 8 by China’s State Council for Legislative Affairs, tightens control over foreign clergy and religious material on the Internet and imposes fines of up to 200,000 yuan ($30,000) for “illegal religious activities,” such as unauthorized pilgrimages.

The new regulations state that “citizens enjoy religious freedom” in China and that “no organization can discriminate against citizens who believe in a religion.”

One expert said the proposed regulations could spell “the end of the underground community” in China. He said article 44 prohibits “proselytizing, establishing religious organizations or setting up religious activity sites” in state schools and stipulates the state’s “right to coerce and enforce lessons of atheism and Marxism in religious schools.”

Lam told Catholic News Service Sept. 30 that the draft was much more extensive than existing rules, implemented in 2005, and reflected attempts by China’s State Administration for Religious Affairs to “enlarge its power over religions.”

He said the new regulations contradicted progress in recent talks between the Chinese government and Vatican representatives. Reuters reported Aug. 27 that Cardinal Pietro Parolin, Vatican secretary of state, was heralding a “new season” in “hoped-for good relations.” However, the cardinal noted: “One has to be realistic and accept that there are a number of problems that need resolving between the Holy See and China and that often, because of their complexity, they can generate different points of view.”

Father Paul Han Qingping, director of the Catholic Church’s Jinde Charities, said the Chinese government was “upgrading its religious policy” because of “international and domestic challenges, such as religion-related terrorism.” He said the restrictions would alarm Catholic communities, despite accompanying pledges to “protect citizens’ religious freedom.”

“The new rules could be good in clearly stating the do’s and don’ts and placing everyone on the same page,” said Father Han, “but they could also be bad by making religious communities nervous as to how far their freedom will now be hampered.”

Father Han predicted the regulations would “create a lot of inconveniences and restrictions,” but said he believed they also reflected “the real world we’re living in.”

“Due to her universal character, especially when it comes to her intimate Vatican connection, the Catholic Church is a big government concern here,” he told CNS Sept. 30.

“Yet these restrictions aren’t meant only for the Catholic Church, which is quite small compared to others, but for all the religions in China. Though the situation regarding religious policies is far from perfect, some progress should also be recognized. It’s a process of evolution, and we must be patient,” he told CNS.

In a Sept. 23 analysis, Father Bernardo Cervellera, a member of the Pontifical Institute for Foreign Missions and editor of the Rome-based AsiaNews, said the proposed regulations went well beyond previous curbs and could spell “the end of the underground community” in China. He said article 44 prohibits “proselytizing, establishing religious organizations or setting up religious activity sites” in state schools and stipulates the state’s “right to coerce and enforce lessons of atheism and Marxism in religious schools.”

He added that they reflected warnings by President Xi Jinping in a May 2015 speech to China’s United Front against “foreign influences.”

“The ideological structure of the new text remains firmly in the communist domain: Religious activities must be screened and controlled by the state at all levels,” said Father Cervellera. “Reading these regulations, religions emerge as a suspect and dangerous phenomenon, made acceptable only if subjected to the people’s government.”

The priest said building places of worship would now be subject to a complicated process of approval “through all levels of government,” and reflect a recent campaign to “reduce the visibility of Christian buildings.”

He added that recruitment of foreign staff for Catholic seminaries and other institutions would also be tightly restricted under article 17, while Catholic bishops without government approval would be barred from ministering under article 36, and severe punishment meted out, under article 70, for groups “accepting domination by external forces.”

“Many Catholics are concerned this might harden the government’s stance toward unofficial bishops not registered with the state administration and therefore committing illegal or outlawed actions if they dare celebrate Mass or distribute sacraments,” the Asia News editor said. “These regulations appear to deal a lethal blow to the underground community, making it almost impossible for them to exercise religious freedom.”

The Catholic Church, estimated unofficially at 14 million members, has 110 dioceses with more than 100 bishops in China. Chinese government regulations require church sites and key leaders register with the government, but about 30 of the 100 bishops have refused to do so.

Sources familiar with the situation note that restrictions on churches often vary according to local government officials. For instance, since 2013, Christian churches in Zheijang province have been subjected to a campaign of cross removals and church demolitions.

PREVIOUS: Tolerance is good for society, the soul, pope says at Azerbaijani mosque

NEXT: Pope visits towns in central Italy devastated by earthquake