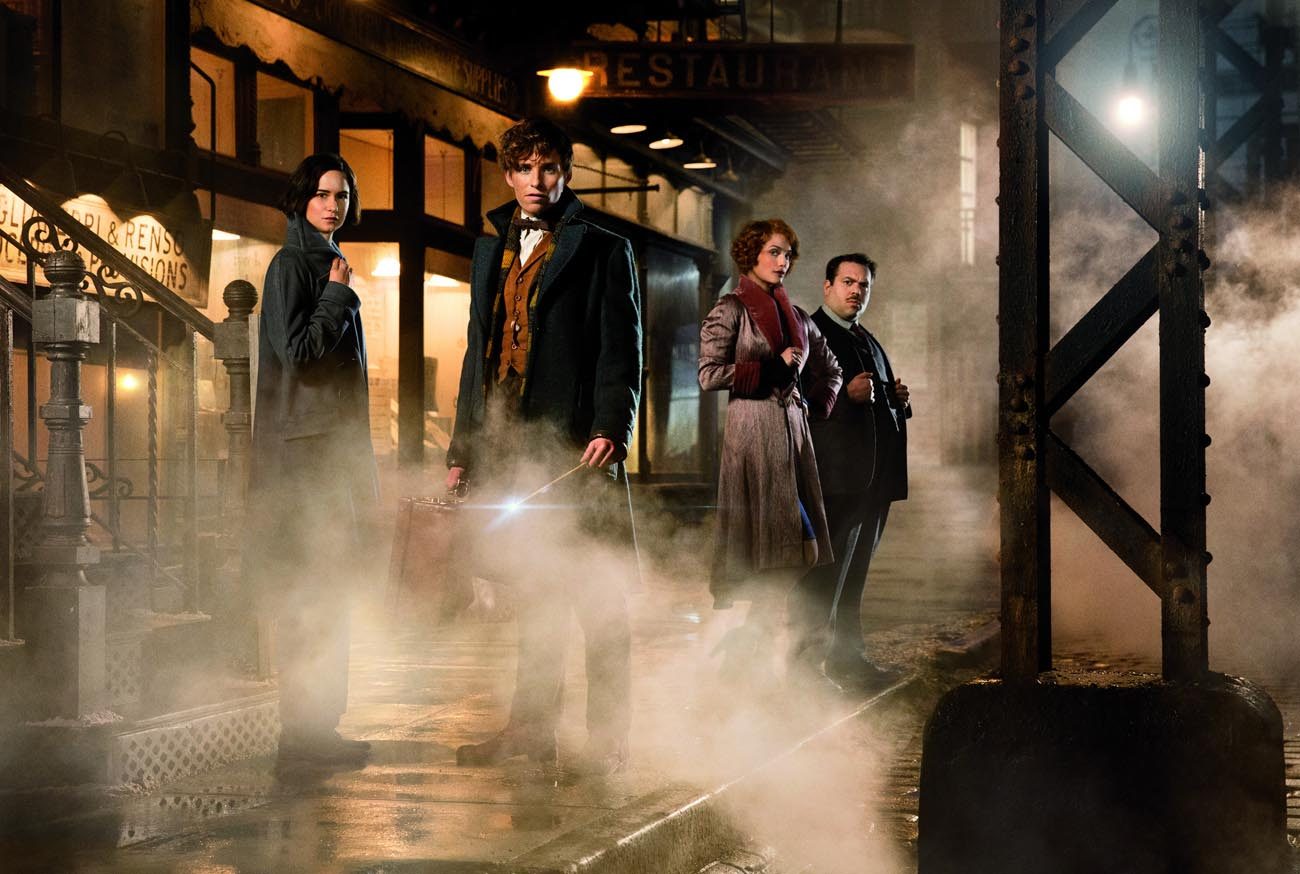 Katherine Waterston, Eddie Redmayne, Alison Sudol and Dan Fogler star in a scene from the movie "Fantastic Beasts and Where To Find Them." (CNS photo/Warner Bros. Entertainment)

NEW YORK (CNS) — Fans of British novelist P.G. Wodehouse have a special place in their hearts for one of his most memorable comic creations, a shy and eccentric newt fancier with the immortal name Augustus Fink-Nottle.

Gussie, as his pal Bertie Wooster always called him, turns out to bear some similarity to the protagonist of “Fantastic Beasts and Where to Find Them” (Warner Bros.).

Since the film is primarily a fantasy and not a comedy, however, this resemblance proves a mixed blessing.

Penned by “Harry Potter” scribe J.K. Rowling, and set in 1926 New York, the movie follows the stateside adventures of Newt Scamander (Eddie Redmayne), an alumnus of Harry’s alma mater, the Hogwarts School of Witchcraft and Wizardry, who specializes in studying and preserving the creatures of the title. As he travels the globe, Newt keeps an entire menagerie of the outlandish critters he’s collected in an ordinary-looking but magical suitcase.

When this valise accidentally falls into the hands of everyday mortal Jacob Kowalski (Dan Fogler), the owner of an outwardly identical grip, it’s easy to foresee the fallout. Jacob cluelessly releases the inhabitants of Newt’s portable zoo, thereby creating two interconnected problems for the spell-caster.

First, there’s the danger of setting off a panic as fauna unknown to nature wander the streets of Gotham. The result of such a sensation, moreover, would be to reveal to humans the existence of the whole carefully hidden world of wand-wavers — with persecution and conflict the likely results.

To prevent all this, Newt joins forces with local Ministry of Magic enforcement official Tina Goldstein (Katherine Waterston). While barely able to understand the alternate reality he’s suddenly stumbled into, Jacob, too, lends a hand. Finally, to round things out — and create parallel love possibilities — Tina’s sister, Queenie (Alison Sudol), also joins the chase to retrieve the strays.

The predictable mayhem punctuating the story is thoroughly stylized. So parents may be more concerned to find that a vaguely religious atmosphere surrounds one of the villains of the piece, anti-wizardry crusader Mary Lou Barebone (Samantha Morton).

The film contains considerable action violence with minimal gore and a couple of uses of a slang term some may find vulgar. The Catholic News Service classification is A-II — adults and adolescents. The Motion Picture Association of America rating is PG-13 — parents strongly cautioned. Some material may be inappropriate for children under 13.

NEXT: ‘Face of Mercy’ documentary shows how mercy works in people’s lives