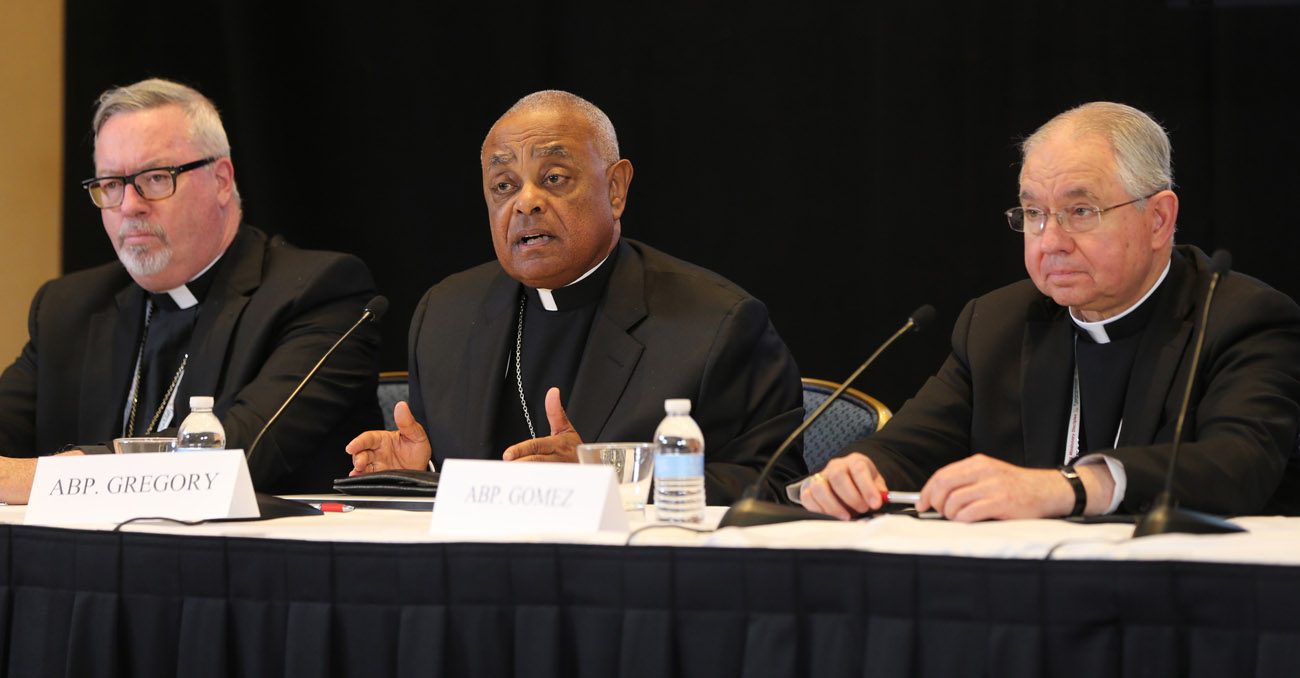 UPDATED – BALTIMORE (CNS) — Earlier this year, as communities faced tensions, protests and violence, following a spate of shootings and killings of black men by police, Archbishop Joseph E. Kurtz of Louisville, Kentucky, as president of the U.S. Conference of Catholic Bishops, asked dioceses across the country to observe a day of prayer for peace.

He also wanted the bishops to look for ways they could help the suffering communities, as well as police affected by the incidents.

To that end, he appointed a special task force to explore ways of promoting peace and healing around the country and named Archbishop Wilton D. Gregory of Atlanta to head it.

On Nov. 14, Archbishop Gregory urged bishops gathered in Baltimore at the USCCB’s fall general assembly to issue, sooner rather than later, a document on racism.

“A statement from the full body of bishops on racism is increasingly important at this time,” said Archbishop Gregory.

He urged that the Administrative Committee of the country’s bishops, “in collaboration with relevant standing committees, do all it can to expedite the drafting and approval of the statement on racism currently contemplated in the 2017-2020 strategic plan, given the urgency of the present moment.”

He said the president of the bishops’ conference and relevant committees need to “identify opportunities for a shorter-term statement on these issues, particularly in the context of the postelection uncertainty and disaffection.”

He also urged prayer, ecumenical and interfaith collaboration, dialogue, parish-based and diocesan conversations and training, as well as opportunities for encounter.

In a news conference that followed his afternoon presentation and ended the first day of the bishops’ assembly, Archbishop Gregory said he was concerned about the communities that were disrupted by violence and riots after the police shootings earlier this summer. Some of these communities are experiencing reactions and tensions brought about by the election results, he said.

“It’s the hope of the task force, of people of goodwill, that the demonstrations, don’t turn violent,” he said.

American society has the ability to give opinions on social matters through various forms of expression, including protests, but “what we pray for is that those expressions of frustrations don’t provide another vehicle for violence.”

Tensions had been high enough in July, when Archbishop Kurtz had said the Catholic Church needed to “walk with and help these suffering communities” that had been affected by the shootings and the riots protesting them that followed.

“I have stressed the need to look toward additional ways of nurturing an open, honest and civil dialogue on issues of race relations, restorative justice, mental health, economic opportunity, and addressing the question of pervasive gun violence,” Archbishop Kurtz said at the time. He said he wanted the work of the task force to help embrace the suffering of the communities, to nurture peace and build bridges of communication and mutual aid in local communities.

The recommendations, said Archbishop Gregory, were examined before the recent elections and all the tensions and protests that have followed. The recommendations were related to race and violence issues that resulted from the summer shootings and riots.

Archbishop Gregory expressed hope that the church could help foster dialogue and bring healing by working with communities for a lasting peace.

“The disruptions (to the) communities that sparked the establishment of the task force have been going on for at least two years,” he said. “Violence against people of color is a lot longer than two years. … The reaction to the election, it’s added to that tension.”

He said he was praying and hoping that “expressions of frustration, of anger, of disapproval” don’t continue to disrupt the social fabric of those communities.

NEXT: Concerns about common good, immigrants among topics at USCCB assembly