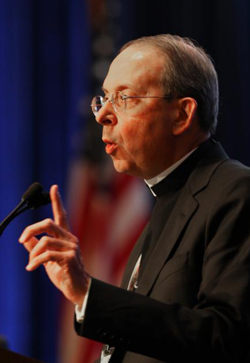 BALTIMORE (CNS) — All U.S. bishops are required to speak out for religious freedom for all people of faith whose beliefs are compromised, said Archbishop William E. Lori of Baltimore.

It also is the role of the bishop to equip laypeople to speak in the public arena about the necessity to protect religious liberty when interventions by government officials at any level infringe on the free practice of religion, Archbishop Lori stressed Nov. 14 during the fall general assembly of the U.S. Conference of Catholic Bishops.

Archbishop Lori’s presentation focused on the role of prelates in the campaign to oppose attempts to limit religious practices rather than giving a rundown of committee activities in the past year.

He cited four roles of the bishop in the religious freedom arena: prayer, teaching, equipping laypeople and speaking up themselves.

“Prayer is the privileged pathway to and the privileged expression of the struggle of our people, both those at home and those abroad,” Archbishop Lori explained.

Each local bishop also must dedicate himself to church teaching in order to forming the faithful “in the sense of human dignity and human solidarity and work of the common good,” the archbishop said.

From the first two roles stems the necessity to “promote Christians to take their places as missionary disciples” in the public sphere,” he continued. “And we have to support those men and women to answer the call to serve the poor and advocate for the vulnerable in life.”

Such efforts require dialogue, both with the people bishops serve and people in public life, including elected office, he said.

“Fourth and finally, there are those times we must speak up for ourselves, particularly when the power of the state is marshaled against the church’s ministers of mercy. The bishop must say something. He must speak truth to power,” Archbishop Lori said.

“We must be winsome, but we must not be silent,” Archbishop Lori said.

“In our own nation’s history, we must help build a civil society in which persons can encounter one another as persons, persons who may see the world differently but who are seeking truth all the same,” he said.

While not directly addressing the outcome of the Nov. 8 election that saw Republican Donald J. Trump become president, Archbishop Lori said the church’s vigilance on religious liberty will continue. Trump has said he would seek to alter government policies that some religious leaders complain restrict religious freedom.

“While the contours of the political landscape are changing and have not come fully into view, it’s crucial we remain steadfast in our efforts to plurality,” Archbishop Lori said.

NEXT: Archbishop calls for bishops’ racism statement given election tension