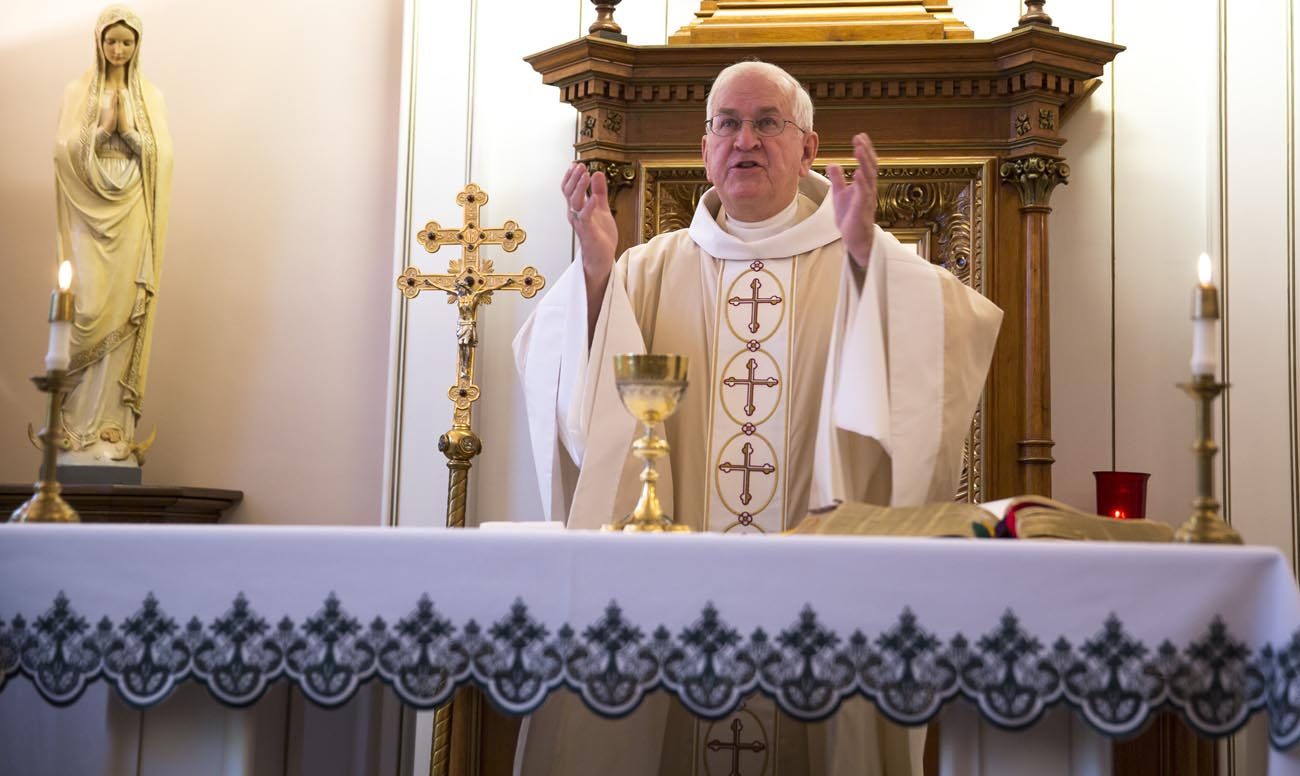 Archbishop Joseph E. Kurtz of Louisville, Ky., celebrates a Nov. 4 morning Mass in a chapel in the chancery of the Archdiocese of Louisville. (CNS photo/Chaz Muth)

The couple graciously agreed to hold a fundraising event for Catholic Extension, a national organization that supports programs for mission dioceses across the U.S. and one the 70-year-old archbishop strongly backs.

He was visibly moved when he heard one of the speakers talk about a prison ministry made possible by Catholic Extension, an outreach Archbishop Kurtz sees as essential in Catholic social teaching.

Events like this one — conducted in the Archdiocese of Louisville, which he has shepherded for the past decade — bolstered his positive outlook for the future of the Catholic Church.

It also offered him an opportunity to reflect on the remaining days of his three-year term as president of the U.S. Conference of Catholic Bishops, which will conclude at the end of the bishops’ fall general assembly in Baltimore Nov. 14-16.

Archbishop Kurtz was elected USCCB president in November 2013, eight months after the election of Pope Francis.

His term has been a busy one that saw a flurry of activity at the Vatican, pastoral trips to typhoon-ravaged Philippines and battle-scarred Ukraine, the Catholic Church’s struggle over religious liberty issues, a resurgence of U.S. racial struggles, growing societal polarization, a refugee crisis and the 2015 U.S. visit of the profoundly popular Pope Francis.

It would go against Archbishop Kurtz’s affable style to call his tenure an exhausting exercise in maintaining a dual role as prelate of an archdiocese and his nation’s representative of the Catholic Church.

Instead, he told Catholic News Service that three years is the right amount of time to serve as president of the U.S. bishops’ conference.

“Come the end of this plenary meeting, I’ll be passing on the baton … figuratively to whoever is elected as the next president, I will do so gladly, I will say this, because I think three years is a good portion of time,” Archbishop Kurtz said during a Nov. 4 interview in the chapel at his archdiocesan chancery. “And I mean that.”

Once the archbishop passes that metaphorical baton, he will leave behind six years of leadership with the U.S. bishops’ conference — his term as president and his 2010-2013 stint as vice president — though, like other past presidents, he will remain on conference’s Administrative Board for a year.

“It’s a wind-down role,” he said. “Be available in case you are needed. But really it’s a gracious role of saying, ‘I support who is the new president.'”

During his term, Archbishop Kurtz said he witnessed an exciting period for the American Catholic Church, with generous giving from U.S. Catholics in response to the devastating 2013 typhoon in the Philippines, numerous natural disasters throughout the U.S. and an openness by many to welcome the stranger in response to the refugee crisis, even when it wasn’t a popular decision to do so.

The bighearted spirit of American Catholics — to give their time, money and resources — offers him faith in the future of the church and where it needs to be.

The highlight of his presidency, however, has to be the pope’s apostolic journey to the U.S. in September 2015, Archbishop Kurtz said.

Not only did that papal visit give Americans an opportunity to forge a closeness with the celebrated Pope Francis, it allowed the pontiff to witness the faithfulness of the U.S. people, he said.

More than a year after that trip, Archbishop Kurtz met with Pope Francis at the Vatican and reiterated the positive impact it had on the American people and was gratified when the pontiff said it was fruitful for him as well.

Other highlights of his presidency include pastoral visits to the Philippines, Haiti, Ukraine, Bogota, as well as his involvement in the Synods of Bishops on the family and the Jubilee Year of Mercy, he said.

“I don’t know how many highlights you can have,” Archbishop Kurtz said, “but there were so many opportunities I had to interact with, not only our Holy Father, but with bishop leadership conferences throughout the world and with average people who I met, often in very difficult circumstances, who gave great hope.”

It’s in the archbishop’s nature to project optimism, a quality that didn’t elude him even when asked to respond to difficult topics such as racism, violence, polarization, economic devastation, religious persecution and the displacement of people fleeing their war-ravaged homelands.

“It’s very difficult to be able to embrace a comprehensive plan that the world — in a sense — can come together and embrace,” Archbishop Kurtz said. “Obviously the church has always said we have to in some way begin with one person at a time — the person in front of us.

“With our bishops’ conference, we’re very, very conscious of the need for us to support peaceful alternatives right within the devastated areas,” he said. “Whether we’re talking about Syria and Iraq, or other parts of the world. It’s very important for us to work with the local episcopal conferences, because they’re on the scene. They know what can happen.”

In an effort to welcome the stranger, offer them assistance and provide them with opportunities for a better life, Archbishop Kurtz points to the church urging the U.S. Congress to pass comprehensive immigration reform with laws that will not be punitive, but will cultivate the common good.

When it comes to religious liberty issues, he said the focus has to be primarily on regions in the world where there is “in-your-face persecution, where people really don’t have the right to exercise their freedom of religion and — in a sense — take their own lives in their hands when they try to.”

He said the church and the human community has not done enough to address these abominations and must collectively tackle these issues in a meaningful way.

The archbishop did say Americans probably have taken their own religious freedom for granted and that legitimate attempts to promote it in this nation are sometimes unfairly seen as an effort to discriminate.

In some cases, the church has not effectively articulated its message when it comes to issues in society that don’t align with church teaching, such as the legalization of same-sex marriage, Archbishop Kurtz said.

When the bishops reiterate the church’s teaching that marriage is the union between one man and one woman and a union that must be open to new life, often he said it’s interpreted as discriminatory toward people with same-sex attraction.

“They don’t necessarily hear the need for us to respect the dignity of every person and call forth that dignity,” Archbishop Kurtz said. “We have challenges in being able to present it in a new way.”

The violence and racial division that’s occurred in cities such as St. Louis, Chicago and Baltimore during his presidency prompted the archbishop to establish the USCCB Task Force to Promote Peace in Our Communities — chaired by Atlanta Archbishop Wilton D. Gregory.

“There are examples in which people are being judged not by, as Martin Luther King Jr. had said, the content of their character, but rather by the color of their skin,” Archbishop Kurtz said. “So, I thought it was important for us to join with people of goodwill in saying that the church needs to be part of a solution of creating opportunities.”

The bishops’ plan to write a pastoral letter on racism, and the church will actively go into communities and invite people of all ethnic backgrounds to come together in prayer and solidarity to build harmony and civility.

Though the archbishop acknowledged these actions are not the only solution to such divisive issues, he believes it is a start.

The humanitarian example of Pope Francis guided Archbishop Kurtz as he confronted each challenge throughout his presidency, which includes societal polarization, in which people vilify those with philosophical differences.

The church needs to model the mind and heart of Christ, “which is to see in the person next to you as a child of God, to be able to listen to people in a civil way, even to listen to people who may not agree with you,” he said. “To do it in a way that is thoughtful and serene.”

The archbishop said the church must emphasize that while everyone should be men and women of conviction, they should also have the conviction to see the goodness in the person sitting next to them.

Though Archbishop Kurtz said he looks forward to a more relaxed pace that his post-presidency should offer, he said the experience has enriched him spiritually.

“One of the benefits of being president is that you see a lot,” he said. “I’ve had a chance truly to see the richness … of the local churches. Whether I go to St. Cloud, Minnesota, or to Cincinnati, or to many different parts of our country, invited to be a part of their local church celebration, it gives me great insights into, not only the struggles … but also the great signs of hope.”