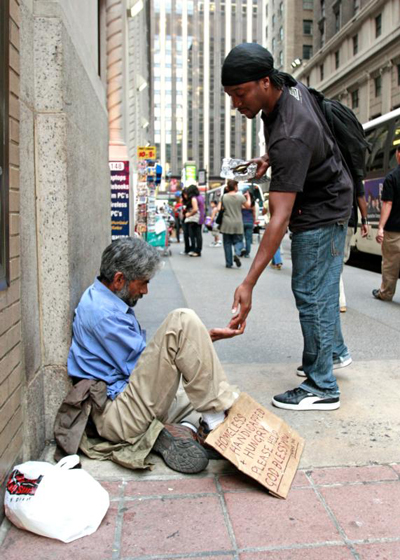 A pedestrian gives money to a homeless man sitting outside St. Francis of Assisi Church in New York City in 2009. Poverty is “more than an issue to be discussed or a problem to be solved,” the Catholic bishops of Washington state said in a joint pastoral letter Nov. 17. (CNS photo/Gregory A. Shemitz)

SEATTLE (CNS) — The dignity of human life, the common good and solidarity are “more than mere words and phrases,” said the Catholic bishops of Washington state in a joint pastoral letter, “Who is My Neighbor?: The Face of Poverty in Washington State.”

Poverty is “more than an issue to be discussed or a problem to be solved. Poverty has a human face,” they said in the pastoral, issued Nov. 17. “When we stop and look into the face of poverty, we recognize that ‘the poor’ are not strangers. They are our sisters and brothers, members of our human family.”

The bishops spent time over the past year listening to those living in poverty, telling the stories of several Washington residents who have been beset by poverty and its associated ills.

“In our listening sessions, we heard ‘the cry of poor,'” they said, citing Psalm 34. “Reflecting on what we heard, we recognize the urgent need for action to alleviate the suffering that has become epidemic in every city, town and community in our state.”

They outlined responsibilities for both the state’s Catholic community and the government to address.

As Catholics, “if we believe the faith we profess, how are we to respond to so many of our neighbors who do not share the benefits of our state’s economic wealth?” the bishops asked. “Because the social and economic factors affecting those living in poverty are so varied and complex, what is the most effective way to relieve their anguish?”

They added, “We have a moral obligation to inform our consciences in light of Scripture and Catholic teaching, and then to take direct action that demonstrates concern for our sisters and brothers. What we must do for ‘the least’ among us is the unmistakable call of the Gospel to disciples of the Lord Jesus.”

While acknowledging that being in relationship with one’s neighbor is “a much greater challenge” than simply asking “Who is my neighbor,” the bishops said, “Acting as sisters and brothers to those who are poor and marginalized, we journey with them as they seek solutions to their problems, address their challenges and take their rightful place in our communities. Scripture and Catholic social teaching form a moral compass to guide our decisions to work for the common good.”

In outlining government’s responsibility with the pastoral, the bishops said they want to “propose a moral basis for determining whether public policies serve justice.”

They noted, “Some things are best addressed by individuals, families, churches and charities; but when problems such as homelessness, hunger, drug addiction and mental illness are common to every community, it is a just and reasonable expectation that society will act cooperatively to address these problems.”

The bishops said, “Our listening sessions convinced us that the plight of those living in poverty in our state is reaching crisis proportions. At the same time, we grew in awareness that providing just a little help can make a big difference. We spoke to many people whose primary obstacle to lifting themselves out of poverty was the lack of secure housing.”

They also observed that while the state offers programs that “reduce poverty, alleviate suffering and ensure basic human rights for those living in poverty,” the bishops added, “It is unfortunately true, however, that when revenue collections fall short, these essential lifelines are among the first to be reduced or eliminated.”

The bishops drew on the Second Vatican Council document “Gaudium et Spes,” the Vatican “Compendium of the Social Doctrine of the Church,” St. John Paul II’s 1987 encyclical “Sollicitudo Rei Socialis,” and the U.S. bishops’ quadrennial document “Forming Consciences for Faithful Citizenship” to conclude that the common good “can be understood as the social and community dimension of the moral good,” that “direct attacks on innocent persons are never morally acceptable, at any stage or in any condition,” and that “the ‘structures of sin that dominate relationships between individuals and peoples must be overcome.”

Signing the statement were Archbishop J. Peter Sartain of Seattle, Bishops Thomas A. Daly of Spokane and Joseph J. Tyson of Yakima, and Auxiliary Bishop Eusebio L. Elizondo of Seattle.