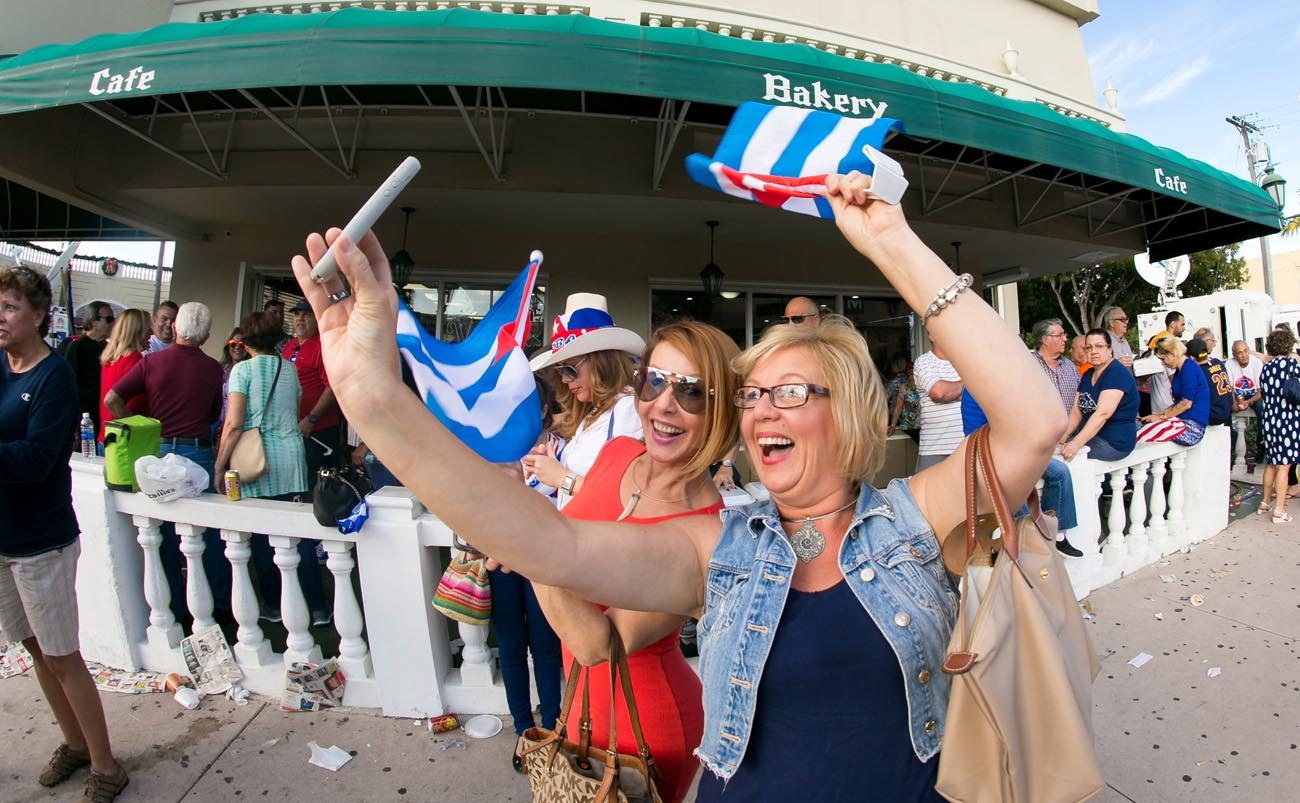 Though there was an undeniable sense of glee and Latin dancing in the streets, many of the revelers were quick to say they were celebrating the end of the principal symbol and founder of the Cuban communist dictatorship rather than anyone’s passing away.

Cuban media announced the death of the 90-year-old Castro sometime late the night of Nov. 25, ending the decades long influence of Latin America’s iconic socialist revolutionary who withstood open tensions with some 11 U.S. presidencies. Many in Miami didn’t know about what was a locally momentous development until the morning of Nov. 26.

“I was listening to the news as I was waking up and I didn’t know if it was real or if I was dreaming, but had I known about it last night, I would have been here then too,” said Elena Suarez, a member of St. John Neumann Parish in South Miami and daughter of the late Roberto Suarez de Cardenas, publisher and founder of El Nuevo Herald, the Spanish-language edition of the Miami Herald newspaper.

The Havana-born Suarez, who started work in the mailroom at the Miami Herald loading newspapers in distribution trucks and inserting supplements by hand into the body of the paper, died in 2010. Like many of the original generation of Cuban-born exiles, the elder Suarez passed away before their nemesis Castro.

“The first thing I did was go and meet my mother and convinced her to go to breakfast at Casa Cuba in South Miami, and so we started the celebration there, and then my neighbor came and got me because I just needed to be here,” Elena Suarez said of the Little Havana street party Nov. 26.

Local police had to close the area to traffic several times throughout the weekend as the area and at least two other local Cuban neighborhoods turned into impromptu gatherings. The focal point was several Cuban restaurants situated on Miami’s famed Calle Ocho, or Eighth Street, west of downtown.

It was a moment that had been anticipated for decades, sometimes frustrated over the years by false reports of Fidel Castro’s passing.

“I have always said that when this happened I would come to Eighth Street; I had to be here,” Suarez told the Florida Catholic, Miami’s archdiocesan newspaper. “My father passed away six years ago and I am very emotional that he is not here to celebrate. It is surreal.”

“Only my mom and my aunt are left from that generation. My father would be out here smoking a cigar,” Suarez added, showing a cigar that she intended to smoke later that night.

Cuban-born pop singer Gloria Estefan, a leading voice of the Miami Cuban cultural community, issued her thoughts over the weekend on her Instagram account, noting that “although the death of a human being is rarely cause for celebration, it is the symbolic death of the destructive ideologies that he espoused that, I believe, is filling the Cuban exile community with renewed hope and a relief that has been long in coming.”

Estefan noted that although the grip of Castro’s regime will not loosen up overnight, “the demise of a leader that oversaw the annihilation of those with an opposing view, the indiscriminate jailing of innocents, the separation of families, the censure of his people’s freedom to speak, state sanctioned terrorism and the economic destruction of a once thriving and successful country, can only lead to positive change for the Cuban people and our world,” she said.

Castro’s younger brother Raul is currently president of Cuba. In 2006, while he was undergoing intestinal surgery, Fidel temporarily transferred power to Raul. He resigned in 2008 and Cuba’s National Assembly named Raul the new president. Raul, now 85, was re-elected in 2013.

The death of Fidel Castro ends a very painful history for Cubans in exile and on the island, according to Andy Gomez, retired assistant provost and dean of international studies at the University of Miami, where he was a senior fellow at the university’s Institute for Cuban and Cuban-American Studies.

Gomez, his wife and several hundred South Florida Catholics traveled to Cuba in 2015 in support of the historic visit of Pope Francis to the island.

“The death of Fidel Castro ends a very painful history for Cubans in exile and on the island. However, let’s not forget that nothing has changed in Cuba,” Gomez said. “The Cuban people continue to be denied their liberty and freedom under Raul Castro. The government remains a totalitarian regime with no changes.”