Admonish sin without putting on airs or being hypocrite, pope says 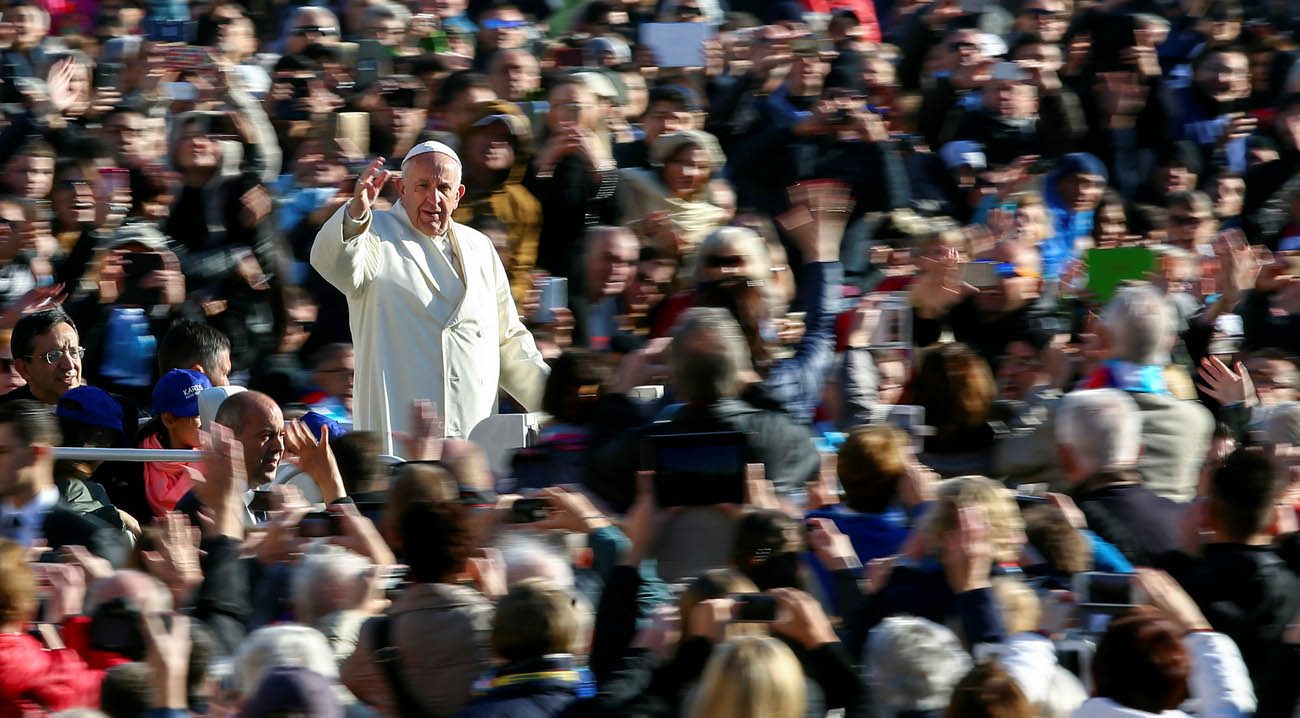 VATICAN CITY (CNS) — Offering counsel and admonishing sinners are works of mercy, but they are not a license to pretend to be better than others, Pope Francis said.

To counsel others is a chance to see how well you, too, measure up to essential standards, he said Nov. 16 to people gathered in St. Peter’s Square.

In his final general audience during the Year of Mercy, which was to close Nov. 20, Pope Francis reflected on two verses in the Gospel of St. Luke (6:41-42) in which Jesus warns against the hypocrisy of noticing “the splinter in your brother’s eye,” but not perceiving “the wooden beam in your own.”

“Remove the wooden beam from your eye first; then you will see clearly to remove the splinter in your brother’s eye,” Jesus says.

Those verses and Jesus’ vision of leadership as service, the pope said, help guide Christians in how to carry out the works of mercy traditionally described as instructing the ignorant, counseling the doubtful, admonishing sinners and bearing wrongs patiently.

“We are all very good at recognizing something that may be an annoyance” and thinking, “How much longer must I listen to this person’s complaints, gossip, requests or bragging,” he said.

Patiently putting up with people is an essential part of the faith, he said, because God showed so much mercy and patience with his people.

The best example, the pope said, is seen in the Book of Exodus when the people became “truly unbearable,” always finding something new to complain about every time God brought relief to each preceding grievance.

“What must we do with bothersome people?” the pope asked. First, look in the mirror and see “if we, too, may sometimes prove to be bothersome to others.”

“It’s easy to point a finger at other people’s faults and shortcomings, but we must learn to put ourselves in the other person’s shoes,” he said.

Like his father, Jesus showed a lot of patience, too, the pope said. For example, when James’ and John’s mother begged Jesus to grant her sons positions of power in his future kingdom, Jesus used the opportunity to offer instruction on the true purpose of his coming — to sacrifice himself for and care for others, not wield power over them.

The spiritual works of instructing the ignorant and admonishing sinners, he said, are all about helping people grow in the faith and discover the path to true joy.

Think, for example, how hard it is for catechists, “especially when kids would rather be playing than listening to the catechism,” he said. Instead, these women and men patiently dedicate their time to teaching young people about the faith.

It is wonderful and important to help people seek what’s truly essential so that they, too, can share in the joy of “savoring the meaning of life.”

So often people just dwell on things that are “superficial, ephemeral and banal,” sometimes because they’ve never run into anyone who encourages them to look deeper, seek something better and appreciate what really matters, he said.

Teaching people to see what is essential is especially critical today when it seems so many “have lost (their) bearings and chase after short-term pleasures.”

Jesus shows how to avoid “envy, ambition and adulation — temptations that are always lurking even among us Christians. The need to counsel, admonish and instruct must not make us feel superior to others, but, above all, requires us to go back into ourselves to make sure we are consistent with what we are asking of others.”

At the end of the audience, in anticipation of the Nov. 20 celebration of Universal Children’s Day, the pope launched an appeal for protecting children and their right to an education.

Pope Francis said he was appealing “to the conscience of everyone — institutions and families — so that children may always be protected and their well-being safeguarded, so that they never end up in some form of slavery, conscripted into armed groups or mistreated.”

He asked the international community to “keep watch” and help guarantee “the right to schooling and education for every boy and girl so that they grow with serenity and look to the future with confidence.”