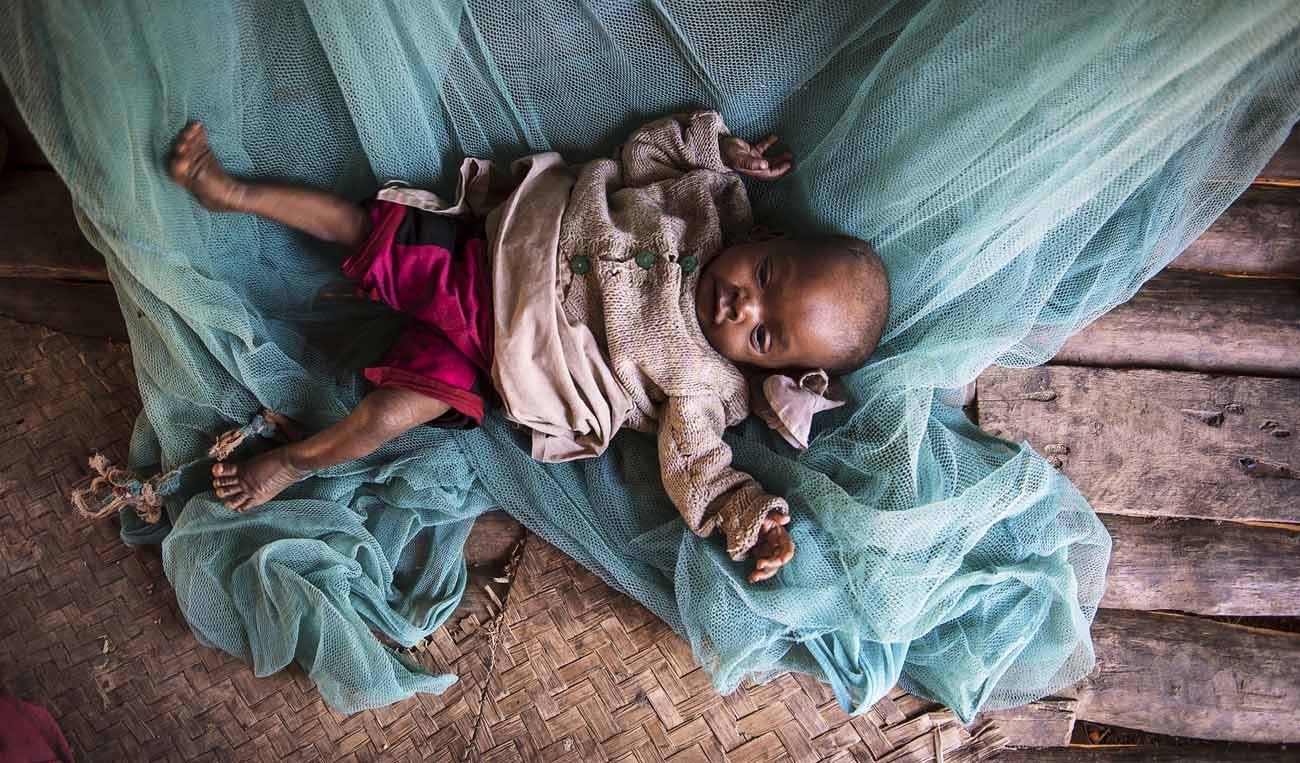 An eight-month-old baby lies on the floor at home in Amboasary, Madagascar, Sept. 21, 2015. Hunger levels are now so severe in drought-ridden southern Madagascar that many people in remote villages have eaten almost nothing but cactus fruit for up to four years, said a Catholic Relief Services official. (CNS photo/Shiraaz Mohamed, EPA)

CAPE TOWN, South Africa (CNS) — Hunger levels are so severe in drought-ridden southern Madagascar that many people in remote villages have eaten almost nothing but cactus fruit for up to four years, said a Catholic Relief Services official.

Eating this fruit leaves crimson stains on people’s faces and hands, and there is a “shame of poverty associated with these stains in Madagascar,” an island nation 250 miles off the coast of mainland Africa, said Nancy McNally, CRS information officer for East and Southern Africa.

The cactus plant “is the only thing that grows” in southern Madagascar, and the plants “are growing everywhere” in earth “that looks like white silt,” she said in a Nov. 23 telephone interview from Nairobi, Kenya.

A father of three, sitting with his wife and children outside the town of Beloha in southeastern Madagascar, “told me that his family had been living on cactus fruit for a year,” McNally said.

“With whatever money he could make” from finding something to sell, he would buy food for the youngest child, she said, noting that “this would amount to a little bit of rice once in a while for the boy, who was about a year old.”

“It’s the worst poverty I’ve seen,” McNally said, noting that the severe drought in southern Madagascar has led the U.N. to warn of potential famine, “a word that is very rarely used for fear of raising a false alarm.”

The U.N. Food and Agriculture Organization warned in late November that 330,000 people in southern Madagascar are “on the verge of a food security catastrophe, next step being famine.”

In Antananarivo, Madagascar’s capital, “begging is very aggressive,” McNally said, noting that “poverty is very deep, and it seems that people’s survival instinct has kicked in.”

El Nino, a warming of sea surface temperatures in the Pacific Ocean, has aggravated dry conditions in Madagascar and the entire southern African region, where an estimated 39 million people are affected by food shortages.

“I saw a baby so thin who had already spent a month being fed” by the Daughters of Charity of St. Vincent de Paul in the town of Tsihombe, Madagascar, McNally said.

Tsapasoa Fedraza’s 20-year-old mother had taken him to the nuns, who run an emergency shelter in the town, after neighbors in her nearby village put her in an oxcart and told her to get him help before he died of malnutrition, she said.

His mother “didn’t have the resources to get there on her own, which is the situation of so many people” in southern Madagascar, she said.

More than 90 percent of Madagascar’s population lives below the $2 a day poverty line, McNally said.

“People are dying in remote villages,” such as Ajampaly, she said, noting that, “we don’t know how bad it is.”

Poor or no infrastructure makes it extremely difficult to reach remote areas in the south of the country, McNally said.

“The chief in Ajampaly told me that the closest water point” was about four-and-a-half miles away, and most people have to walk to get water, she said.

“Those who suffer most are people who don’t have family to help them — children and the elderly,” she said. While there is some food in the markets in towns, “it is too expensive for most people.”

The Daughters of Charity of St. Vincent de Paul have “a pervasive network in the communities” of southern Madagascar and are helping CRS provide food aid to the worst-hit villages, she said.

Madagascar needs a much stronger international response to this crisis, she said, noting that some areas of the island have had no rain at all for four years.

“A 70-year-old man I talked to said he had farmed with his father when he was young, and every year (they) had a rainy season that could be counted on, but those times are gone and are not coming back,” McNally said.