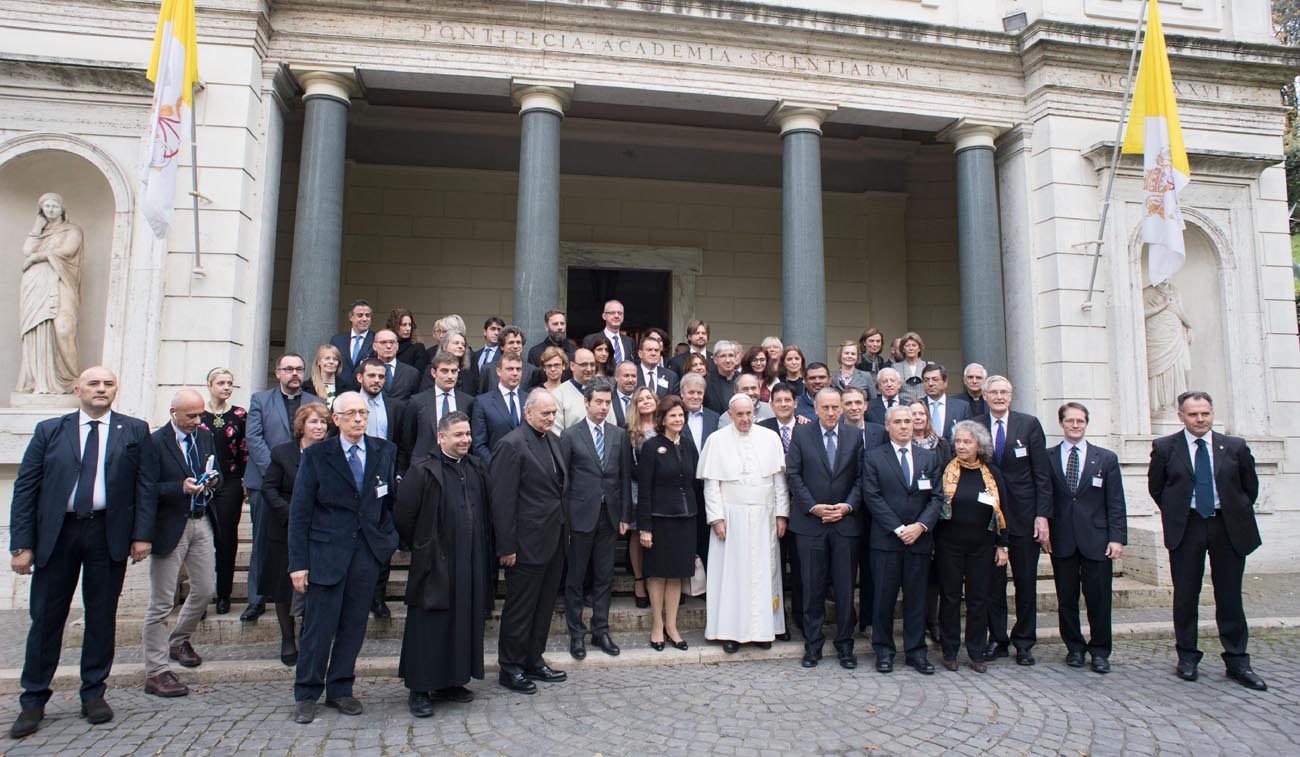 Pope Francis he is flanked by Queen Silvia of Sweden as he poses with attendees at a conference organized by the Pontifical Academy of Social Sciences at the Vatican Nov. 24. The pope called for protecting the dignity of substance abusers and also condemned the "vast, powerful networks" behind the drug trade. (CNS photo/L'Osservatore Romano, handout)

VATICAN CITY (CNS) — Pope Francis called for protecting the dignity of substance abusers and condemned the corruption and incompetence that trap so many innocent people in the snares of addiction.

The “vast, powerful networks” behind the drug trade kill not only those who become slaves to drugs, he said, they also kill those “who want to destroy this slavery” — such as judges or others who seek to stamp out criminal organizations.

The pope spoke Nov. 24 to dozens of experts in medicine, science, the judicial system, government and social policy and pastoral care, who attended a special study session at the Pontifical Academy of Sciences. Those gathered Nov. 23-24 discussed solutions to drug use and abuse, and the most effective forms of prevention.

The pope underlined the inherent dignity of all people who struggle with substance abuse, and asked that they be listened to and treated appropriately, not looked at as if they were some kind of “object or broken device.”

It shouldn’t be that surprising, the pope said, that so many people become addicted given that today there are on offer so many possibilities for achieving some “fleeting happiness, that in the end become poison that corrodes, corrupts and kills.”

Addicts not only destroy themselves, they bring down everyone around them, as well as cause other repercussions on society, he said.

The networks behind the production and distribution of illegal substances bring “physical, psychic and social death. The disposal of a person. Vast, powerful networks that trap responsible people in society, in government, in families,” he said.

Organized crime is responsible for a large part of these networks, he said, “but one challenge is precisely that of finding a way to inspect the chains of corruption and the forms of money laundering.

“To that end, there is no other path than that of moving up the supply chain that goes from the drug market, up the small ladders to the more sophisticated forms of laundering that are hidden in the financial capital and banks specializing in laundering dirty money,” he said.

Recalling his own country’s struggle with drug traffickers and the threats one Argentine judge received because of his efforts to clamp down on the problem, the pope said whenever one inspects the distribution chain, one ends up running into the mafia.

The pope lamented the obstacles so many prevention and treatment programs face because of “the ineptitude of governments” or because effective programs “almost don’t exist” or because mafia involvement leads to many leaders becoming complicit.

Prevention and rehab are critical and if those things are not guaranteed, including with the help of government, “recovery will be difficult and victims many be re-victimized,” he said.