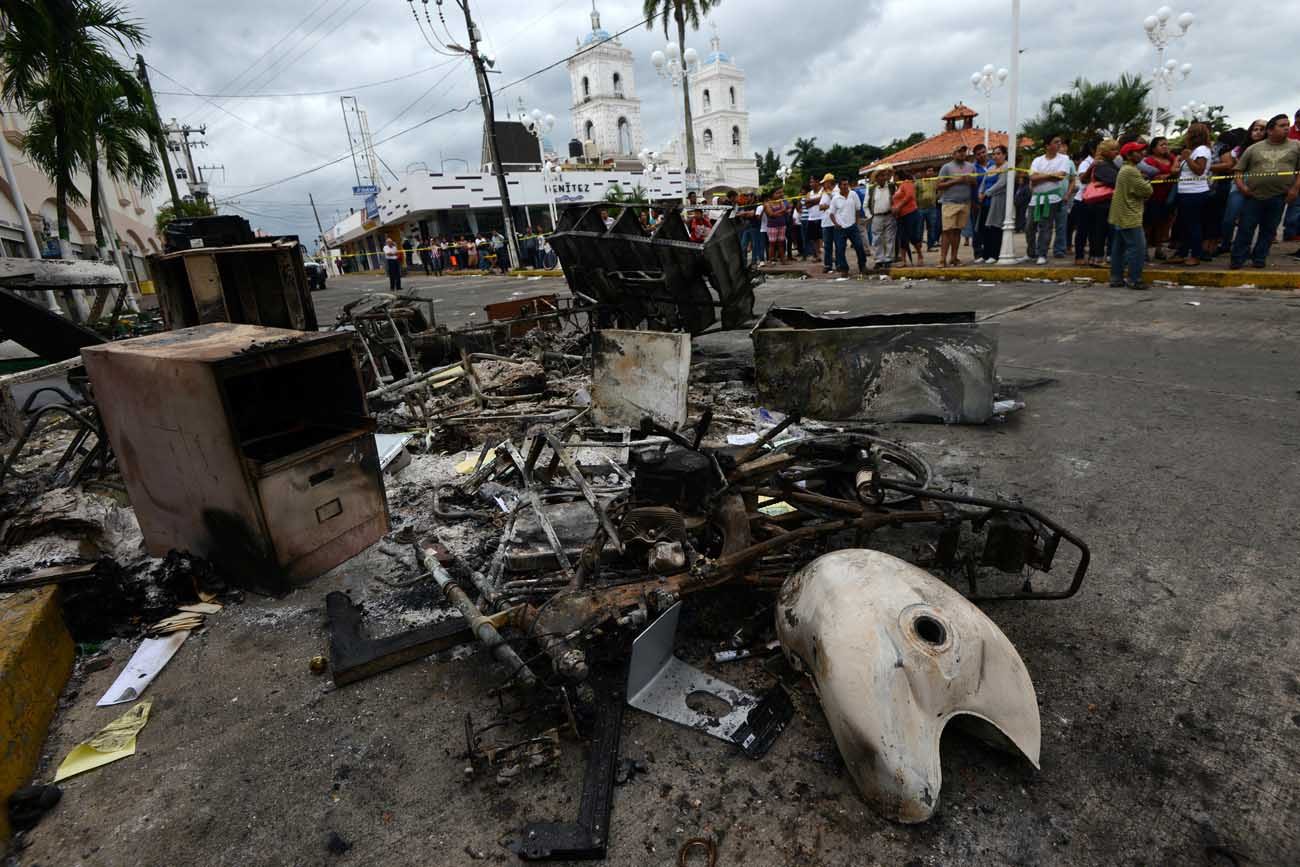 People stand near the burned municipal building in Catemaco, Mexico, Nov. 14, after it was set on fire following the disappearance of Father Jose Luis Sanchez Ruiz, pastor of Twelve Apostles parish. The outspoken priest, who had been reported missing in the state of Veracruz, was found alive, but with signs of torture. (CNS photo/Oscar Martinez, Reuters)

MEXICO CITY (CNS) — An outspoken priest who had been reported missing in the state of Veracruz was found alive, but with signs of torture.

Father Jose Luis Sanchez Ruiz, pastor of Twelve Apostles parish in Catemaco — a town known for witchcraft, some 340 miles southeast of Mexico City — was reported missing Nov. 11, sparking unrest and the ransacking and burning of the city hall by residents impatient with the police response.

A statement from the Diocese of San Andres Tuxtla said Father Sanchez was found “abandoned” Nov. 13 “with notable signs of torture.”

Father Aaron Reyes Natividad, diocesan spokesman, told local media that Father Sanchez had received threats via WhatsApp and Facebook, while the doors to the church also appear to have been opened with force. He denounced crime and corruption in Veracruz — where a former governor is currently on the lam for funneling millions of dollars of state money into shell companies — and also rallied residents against high electric bills.

“He was nervous, but nothing stopped him,” Father Reyes told Veracruz news organization blog.expediente.mx.

“We think that a lot of what happened has to do with what the padre said in his sermons,” Father Reyes said. “He gave the names of those responsible for insecurity, stealing from the community and generating poverty.”

The abduction and torture of Father Sanchez marked another case of clergy coming under attack in Mexico, where at least 15 priests have been murdered in the past four years, according to the Centro Catolico Multimedial. Many of the investigations in the killings have left church officials unhappy, but were reflective of a country in which nearly 94 percent of crimes go unreported or uninvestigated, according to a survey by the state statistics service.

In Veracruz, which hugs the country’s Gulf Coast, Fathers Alejo Jimenez and Jose Juarez were kidnapped and killed in September in the city of Poza Rica. Authorities said the priests had been drinking with their attackers prior to falling victim, a version rejected by church officials.

Another priest, Father Jose Alfredo Lopez Guillen, was kidnapped and killed in the western state of Michoacan less than a week later. The Michoacan government initially released video footage purportedly showing him in a hotel with a teenage boy, but the family and church officials disputed the claims, forcing a retraction.

Church officials are at a loss to explain the attacks against them, though nearly 150,000 people have died since the country started cracking down on drug cartels and organized crime a decade ago. Priests in rough areas — such as Veracruz — have fallen victim to crimes, and it’s thought the motives for some of the murders include the nonpayment of extortion, robbery and pastors not allowing those in the drug trade to serve as godparents in baptisms.

“The aggressors have lost their respect for God and lost respect for priests, too,” said Father Alejandro Solalinde, an activist priest in southern Mexico on issues of migration and the target of threats from organized crime.

“This priest (in Veracruz) will not return the same,” Father Solalinde said. “He’s going to live in fear, going to live with the effects of this trauma.”

NEXT: No one is excluded from God’s mercy, pope says