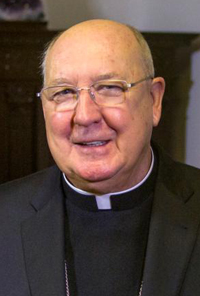 Bishop Kevin J. Farrell, who headed the Dallas Diocese from 2007 until mid-August, is seen at the Vatican Nov. 15. (CNS photo/Robert Duncan

VATICAN CITY (CNS) — Even though Cardinal-designate Kevin J. Farrell had asked his secretary to hold all phone calls so he could finish his work, one caller insisted on getting through.

“She came in and said that the pope was on the telephone, and I kind of laughed and said, ‘Sure, the pope’s on the telephone,'” he said, adding that the secretary continued to insist it really was the Holy Father because she knew his voice from television.

“And it was the pope,” he told Catholic News Service Nov. 15.

Pope Francis made that surprise call in May to tell the then-bishop of Dallas he was the papal pick to lead a new super-dicastery bringing laity, family and life together under one roof.

“Well, I nearly had to call 911 because I did not expect that and I mustered my energy, my mind, to tell him a couple of reasons why I did not think I was the person for that job,” he said.

The then-bishop said he breathed a sigh of relief when the pope said to just think about it and he would call again in three days, because he was sure the pope would never call back.

The cardinal-designate said he gave the pope even more excuses for not accepting the job, but then the pope said, “‘Well, you’d better come talk to me.’ And it was over,” meaning resistance was futile “and here I am” in Rome as of October.

The pope told him there were separate Vatican congregations for bishops, religious and clergy and more, but there was no congregation for the men and women who make up 98-99 percent of the Catholic Church — the laity.

Naming him to the College of Cardinals, he said, was a special hat tip to the laity because putting a cardinal at the helm tells people the pope considers this focus of laity, family and life to be “very important.” Cardinal-designate Farrell will be one of 17 new cardinals elevated Nov. 19, joining two others from the United States.

Though he is very familiar with Rome, having studied at the Pontifical Gregorian University and the Pontifical University of St. Thomas Aquinas as well as from his frequent and regular visits to his brother Bishop Brian Farrell who is secretary of the Pontifical Council for Christian Unity, actually living in the Eternal City to head up a new office was still taking some getting used to, he said.

The new dicastery should have a full slate of members and consultors from all over the world early next year and a majority of them will be laypeople, he said. He expects it will take a year for the new structure to be “completely settled.”

What is new is that most of the senior positions will also have to be staffed by laity, as mandated by the statutes, and while that is a big change for a Vatican dicastery, “I don’t think it’s going to be unique for dicasteries in the future,” he said. “That is the intention of the Holy Father, to have laypeople involved in the administration of the church.”

His new role and the role of the new office, he said, is to be a sounding board, listening to the needs of the laity across the world and providing bishops’ conferences with possible ways to engage the laity, have them participate more in the church and promote the lay apostolate and solid formation of Catholics.

“One of the crises we face in the United States,” he said, “is the lack of laity trained to pass on the faith, to pass on the teaching of our church and traditions.”

So many people rely on older parents or grandparents for faith education and witness in the family, he said, “because we haven’t trained young people” and they are the ones who “are going to convince people, they are the witnesses who are going to attract others in the church.”

Despite his varied and vast experience, especially in finance and administration, the Dublin-born prelate said what has prepared him best for his new job are all the years spent working in parishes.

“The most important part of my training,” he said, “was pastoral work, forget all the administration part, that’s the least important.” It was the ability and desire to do outreach and get laypeople involved in the church and help young people go out and meet youths from other backgrounds and economic classes, he said.

“I think we need to be a little more pastoral today,” to reach out to the people like Jesus did, not “afraid of speaking to public sinners and to cure the poorest of the people.”

The cardinal-designate’s job and the task of the whole church, he said, is that same mission of going out to meet everyone, especially those who are hurting, and bringing them back to the church.

Pope Francis, too, has been showing through his own gestures, words and style that “we need a more loving, a more caring church,” Cardinal-designate Farrell said.

“But we keep pushing rules and regulations,” perhaps even to excess, and yet people still fail at being good at following rules, he said.

Standards and limits are needed, but as Pope Benedict XVI said often, “our Catholic faith is not about commandments or a moral code. It’s about an encounter with the person of Jesus Christ.”

And it is only from that encounter that “we derive our doctrine. But it’s not the rules and regulations first, it’s the encounter with Jesus Christ first.”