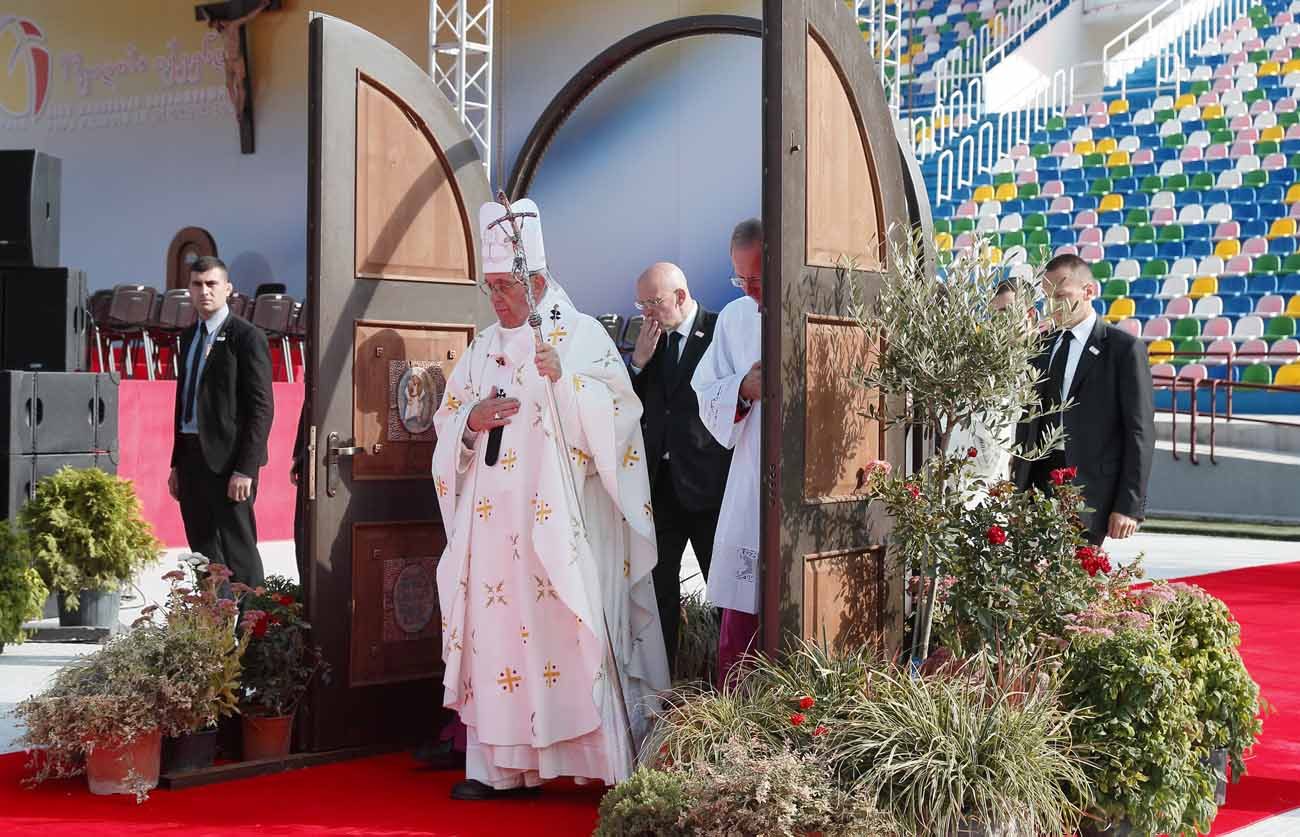 VATICAN CITY (CNS) — The Year of Mercy brought more than 20 million pilgrims to Rome, but for Pope Francis, the idea always was that the celebration of God’s mercy would be local: have people experience God’s love in their parishes and send them out into the world to commit random acts of mercy.

While concrete works of mercy have a social impact, Pope Francis’ idea was deeply connected to evangelization, which is why Rome jubilee events were organized by the Pontifical Council for Promoting the New Evangelization. The pope had said he wanted the Holy Year to be “a new step on the church’s journey in her mission to bring the Gospel of mercy to each person.”

The pope’s constant refrain during the Year of Mercy, which began Dec. 8, 2015, was that no one is excluded from the mercy of God, who has shown his love for each person by sacrificing his son for the salvation of all. All can be forgiven, the pope taught over and over again. And once a person experiences just how loving and merciful God has been, the obligation is to reach out to others with that same love and mercy.

Pope Francis made no claim to having invented a church focus on divine mercy. The evangelical trend was already clearly present in when St. John Paul II wrote an encyclical letter on mercy in 1980 and when he beatified and then canonized Sister Faustina Kowalska, known as the “Apostle of Divine Mercy.”

“I believe this is the time of mercy,” Pope Francis told reporters traveling with him to Brazil in 2013 on his first foreign trip as pope. “The church is mother. She must go out and heal wounds with mercy.”

For Pope Francis — personally and for all Catholics — that healing is expressed most powerfully in the confessional where one is honest about one’s sins and where God’s forgiveness and mercy are expressed through sacramental absolution.

The pope formally commissioned more than 1,100 priests from around the world as “missionaries of mercy” on Ash Wednesday, Feb. 10, giving them special faculties to grant absolution even in cases that usually must be referred to the local bishop or even the Vatican.

Along with processions to the Holy Door in St. Peter’s Basilica and a meeting with Pope Francis, all of the major jubilee events in Rome included extended hours for confession. It was part of all the large jubilee events, including those for children, for people in mourning, for deacons, priests, the sick, youths, catechists, prisoners and for papal nuncios — the pope’s ambassadors around the world.

As he has done before, ignoring the cameras, Pope Francis himself went to confession during a special Lenten penance service in St. Peter’s Basilica and again in August in Assisi when he celebrated the traditional “Pardon of Assisi.”

Setting an example did not stop at the church doors, though. One Friday each month throughout the Year of Mercy, Pope Francis quietly left the Vatican — without informing the media — and spent the late afternoon and early evening making visits reflecting the traditional corporal works of mercy.

The visits took him, among other places, to a community for persons recovering from addiction, a hospice, a hospital neonatal care unit and to an apartment on the outskirts of Rome where he met with men who have left the priesthood to marry and have children.

A highlight of the year was the canonization of Mother Teresa of Kolkata, an event that brought some 120,000 people to St. Peter’s Square in September.

In his homily, Pope Francis said, “God is pleased by every act of mercy because in the brother or sister that we assist, we recognize the face of God which no one can see.”

“Each time we bend down to the needs of our brothers and sisters,” he said, “we give Jesus something to eat and drink; we clothe, we help and we visit the Son of God.”

Preaching God’s mercy has been a central focus of Pope Francis’ ministry since his election in March 2013, and the closing of the Holy Door in St. Peter’s Basilica Nov. 20 will not end that focus.

Celebrating a jubilee Mass Nov. 13 with the homeless and other people in precarious situations, Pope Francis prayed that as the Holy Doors in some 10,000 cathedrals, shrines and churches around the world were closed, God would open people’s eyes and hearts to the needs of others.

The Year of Mercy was an occasion to help people recognize how merciful God has been to them and, then, in effect, he commissioned all Catholics to be “missionaries of mercy.”