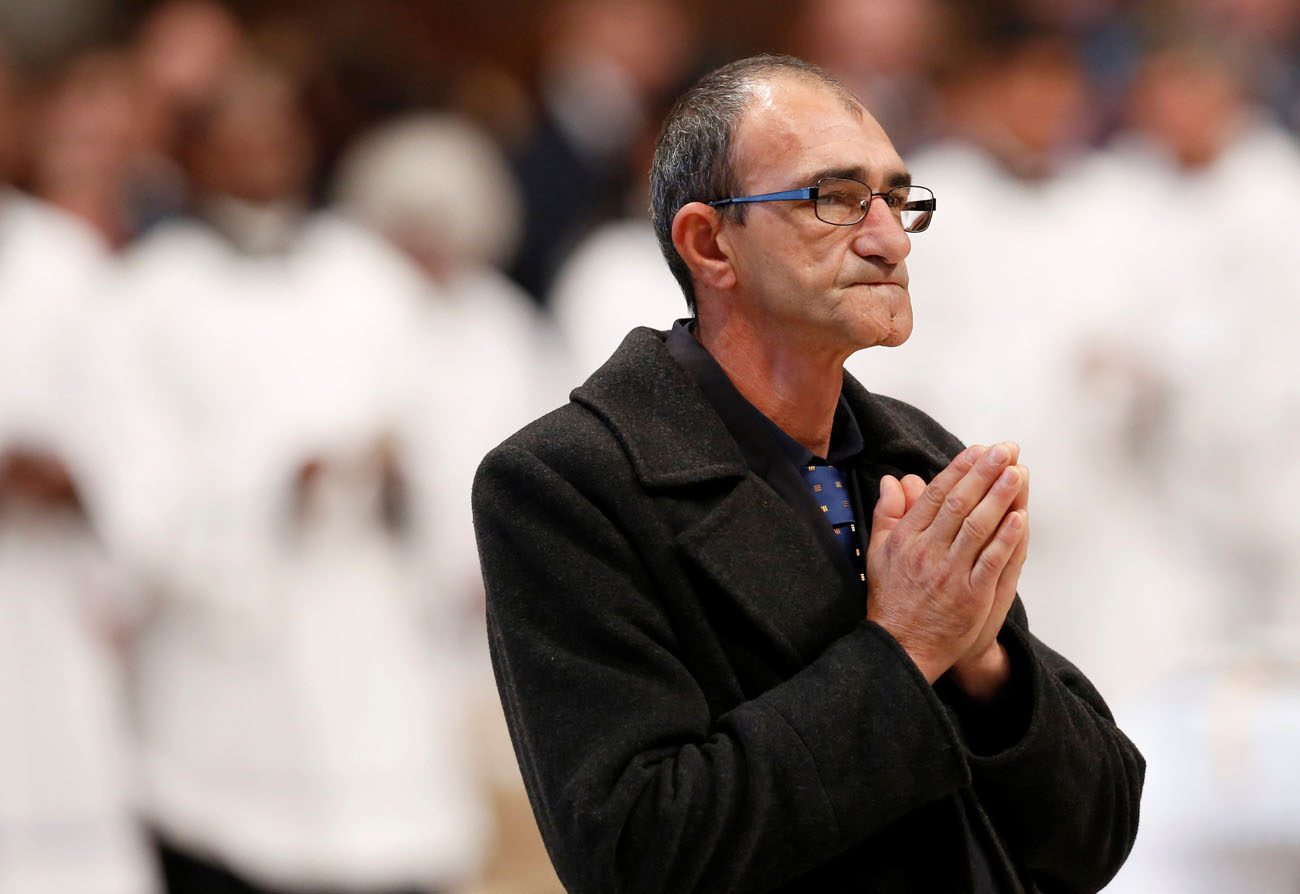 A man prays during a Jubilee Mass for the homeless celebrated by Pope Francis in St. Peter's Basilica at the Vatican Nov. 13. (CNS photo/Remo Casilli, Reuters)

VATICAN CITY (CNS) — People who follow Christ do not listen to “prophets of doom,” silly horoscopes or sermons that frighten and divide people, Pope Francis said.

Christians persevere in hope and love — no matter what upheavals and difficulties arise, he said in a homily Nov. 13 in St. Peter’s Basilica.

“This is important to distinguish the word of wisdom that God speaks to us each day from the shouting of those who seek in God’s name to frighten, to nourish division and fear,” he said.

The pope’s remarks came during a Mass for the poor and socially excluded — “the Lazaruses of today” — as part of the Year of Mercy celebrations at the Vatican.

The pope reminded those gathered for Mass — many of them facing precarious living conditions — that for those who “are materially poor but rich in God, the sun of justice will rise.”

“Your presence here helps us to be attuned to God’s wavelength, to see what he sees,” which is not mere appearances, but how humble and contrite one’s heart is, he told them.

“What harm we do to ourselves when we fail to notice Lazarus, excluded and cast out” in the world today because “it is turning away from God himself.”

Being more interested “in objects to be produced rather than on persons to be loved” is a symptom of the “spiritual sclerosis” afflicting humanity today, he said. It is part of “the tragic contradiction of our age: as progress and new possibilities increase, which is a good thing, less and less people are able to benefit from them,” the pope said.

This “great injustice” should be the focus of people’s concern and attention “because we cannot go about our business quietly at home while Lazarus lies at the door,” he said. “There is no peace in the homes of the prosperous as long as justice is lacking in the home of everyone.”

Unfortunately, when people are focused only upon themselves, their interests, security and earthly possessions, they may easily become distracted and deceived by “the false spirit.”

Jesus warned his disciples about it in the day’s Gospel reading (Lk 21:5-19) when they begged him to reveal when and by what signs the end times would come, the pope said.

“We are constantly driven by curiosity. We want to know when and we want to see signs,” he said. “Yet Jesus does not care for such curiosity.”

“On the contrary, he exhorts us not to be taken in by apocalyptic preachers,” the pope said. “Those who follow Jesus pay no heed to prophets of doom, the nonsense of horoscopes, or terrifying sermons and predictions that distract from the truly important things.”

Jesus asks that people “persevere in the good” and place all their trust in God, who does not disappoint, forget or abandon his people, he said.

Even though Holy Doors would be closing with the end of the Year of Mercy, Pope Francis asked people to make sure they do not close their hearts to those in need.

May people keep their eyes open and focused on God and their neighbor, especially those who are forgotten and excluded, he said. It is “unacceptable” that people are growing numb or used to people being rejected or allowed to suffer,” he added.

“What endures, what has value in life, what riches do not disappear? Surely these two — the Lord and our neighbor,” he said. They are to be loved above all else while the rest, “the heavens, the earth, all that is most beautiful, even this basilica, will pass away; but we must never exclude God or others from our lives.”

As part of the special jubilee, Pope Francis hosted a concert for the poor and excluded in the Vatican’s Paul VI audience hall Nov. 12.

The music was conducted by Italian composer, Msgr. Marco Frisina, and Oscar-winner Ennio Morricone, who ended the concert with music he composed for “The Mission” — a 1986 Academy Award-winning film about an 18th-century Spanish Jesuit priest who ministered to indigenous people in South America.

PREVIOUS: No one is excluded from God’s mercy, pope says

NEXT: New cardinals, old traditions at play for Nov. 19 consistory