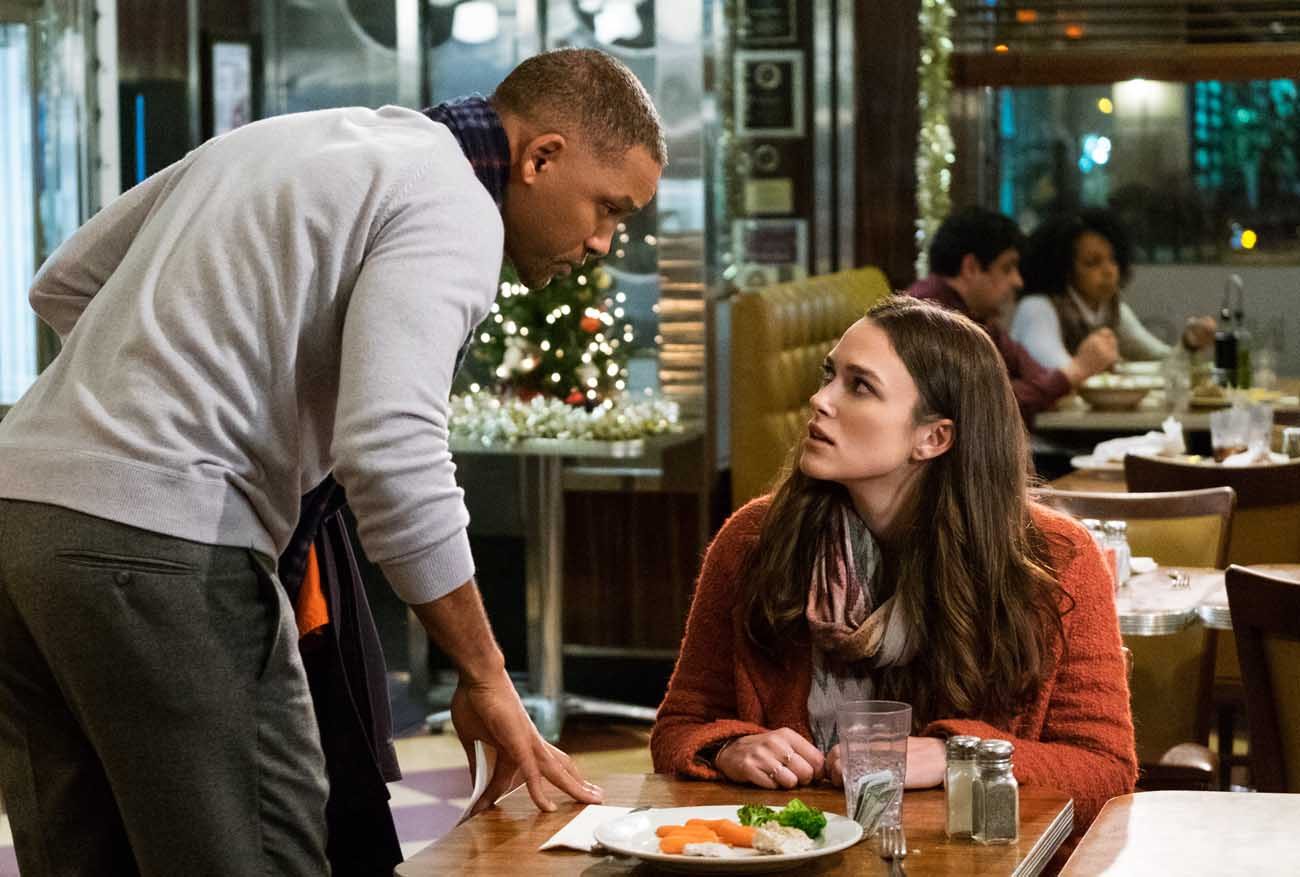 Will Smith and Keira Knightley star in a scene from the movie "Collateral Beauty." The Catholic News Service classification is A-III -- adults. The Motion Picture Association of America rating is PG-13 -- parents strongly cautioned. Some material may be inappropriate for children under 13. (CNS photo/Warner Bros.)

While that’s obviously a subject about which a good film — perhaps many of them — might be made, the treatment of it in director David Frankel’s quirky mess of a movie is at once too bizarre and too pat to yield any insights.

The talented cast certainly do their best to redeem the proceedings, though ultimately their effort proves futile. Will Smith plays Howard, a formerly successful advertising executive so emotionally paralyzed by the death of his young daughter that he endangers the future of his firm by his neglect of clients.

The thespians are to prove that Howard has gone off his rocker by impersonating the three abstractions — death, love and time — to which, as private detective Sally (Ann Dowd) has discovered, Howard has written, and mailed, angry letters. Sally will capture the resulting exchanges on her mobile phone, the players will be edited out of the footage, and Howard will be shown ranting away to himself.

To take the blatantly unethical nature of this maneuver on the part of Howard’s partners, who also claim to be his friends, seriously would first require a jumbo-sized suspension of disbelief. The fact that the death-love-time triad also just happens to fit the life situations of these treacherous amigos similarly strains credibility.

The occasional jokes that leaven the dialogue in screenwriter Allan Loeb’s script, moreover, are far outnumbered by fortune-cookie sentiments the audience is clearly meant to receive as nuggets of wisdom. Some of these come from the picture’s moral-compass setter, Madeleine (Naomie Harris). A bereaved mother who leads a therapy group Howard reluctantly joins, Madeleine also shares the anecdote from which “Collateral Beauty” takes its title.

If you’ve ever heard the one about “silver linings,” you pretty much know what the moral of that story is going to be. Those willing to endure the blizzard of cliches of which the eponymous phrase forms but a flake will, however, find a warm endorsement of marital fidelity waiting for them at the wrap.

The film contains an adultery theme, at least one use of profanity as well as several crude and a couple of crass terms. The Catholic News Service classification is A-III — adults. The Motion Picture Association of America rating is PG-13 — parents strongly cautioned. Some material may be inappropriate for children under 13.

PREVIOUS: With ‘Rogue One: A Star Wars Story’ the Force will be with us, always

NEXT: ‘Sacred’ film aims to show common path of life among various faiths