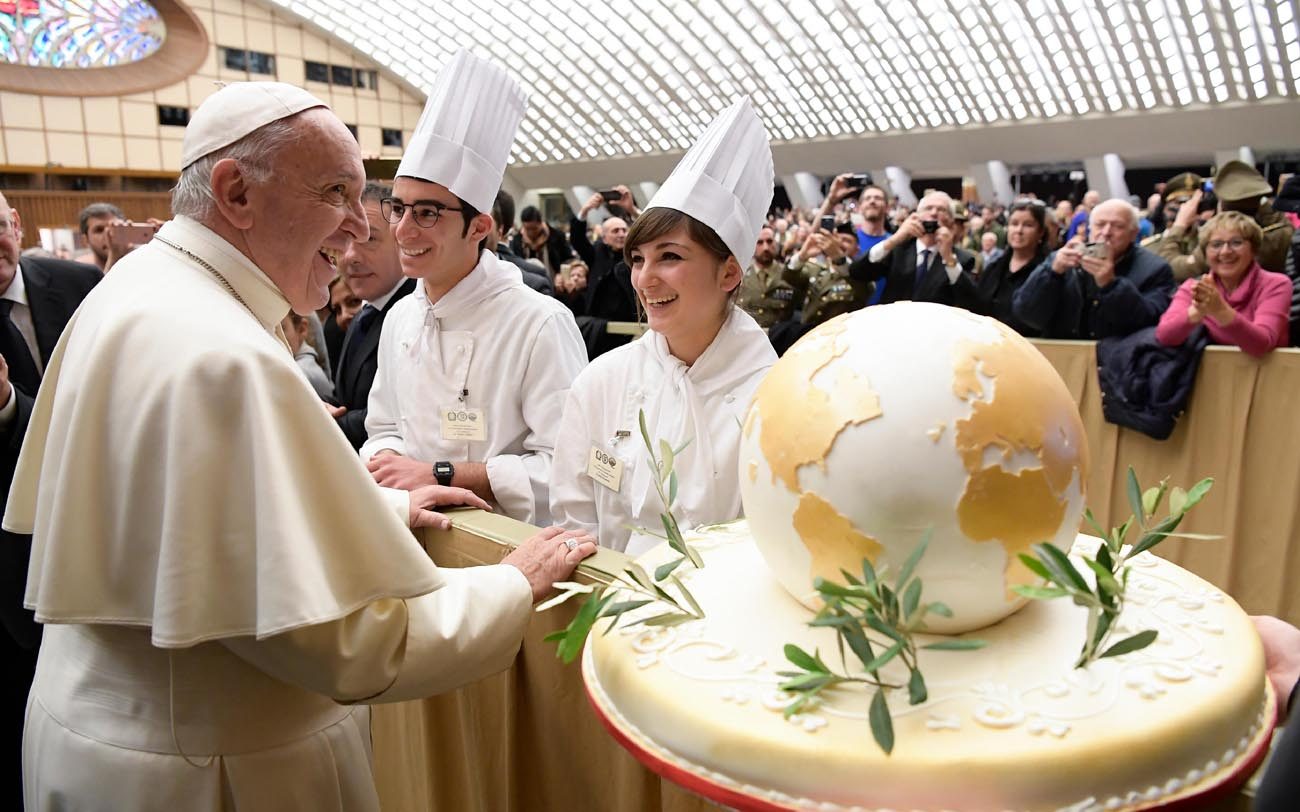 Pope Francis accepts a birthday cake from chefs during his general audience in Paul VI hall at the Vatican Dec. 14. The pope will turn 80 Dec. 17. (CNS photo/L'Osservatore Romano, handout)

WASHINGTON (CNS) — No Greater Love, a Washington-based humanitarian organization, is asking Catholics everywhere to offer Pope Francis a spiritual bouquet by praying the joyful mysteries of the rosary on his 80th birthday, Dec. 17.

“This spiritual bouquet represents the good wishes and blessings sent by millions throughout the world who will be praying the rosary on the Holy Father’s birthday to thank God for the gift of Pope Francis. It will be a joyful day of tribute to our spiritual leader,” said a statement from Carmella LaSpada, founder and chairwoman of No Greater Love.

“Catholics everywhere can put their faith into action in this joyful mission by becoming rosary ambassadors,” she said. “May the shared commitment of thousands worldwide inspire each ambassador with the idea that every small act, when we are working together, can make our church stronger and the world better.”

LaSpada said that besides praying the joyful mysteries of the rosary on the pope’s birthday, rosary ambassadors should ask a friend to do the same “thus multiplying our spiritual gift to the Holy Father” and should promise “to live each day in the light of God’s love through love of neighbor.”

A news release from No Greater Love listed as rosary ambassador “team members,” among others, Supreme Knight Carl Anderson; Mother Mary Angela of the Poor Clares of Perpetual Adoration; Archbishop Timothy P. Broglio of the U.S. Archdiocese for the Military Services; Doug Keck, president of the Eternal Word Television Network; Patty Melvin, coordinator of the Universal Living Rosary Association; Msgr. Walter Rossi, rector of the Basilica of the National Shrine of the Immaculate Conception in Washington; and Carmen Zumot, president of the Catholic Pilgrim Office.

LaSpada also invited U.S troops stationed throughout the world “to be part of this mission of prayer, peace and love.

No Greater Love was founded in 1971 as a nonprofit organization to honor the nation’s fallen troops and their grieving families as well as support active members of the military and veterans.

PREVIOUS: Catholic college dedicates sacred space as place for all faiths to pray