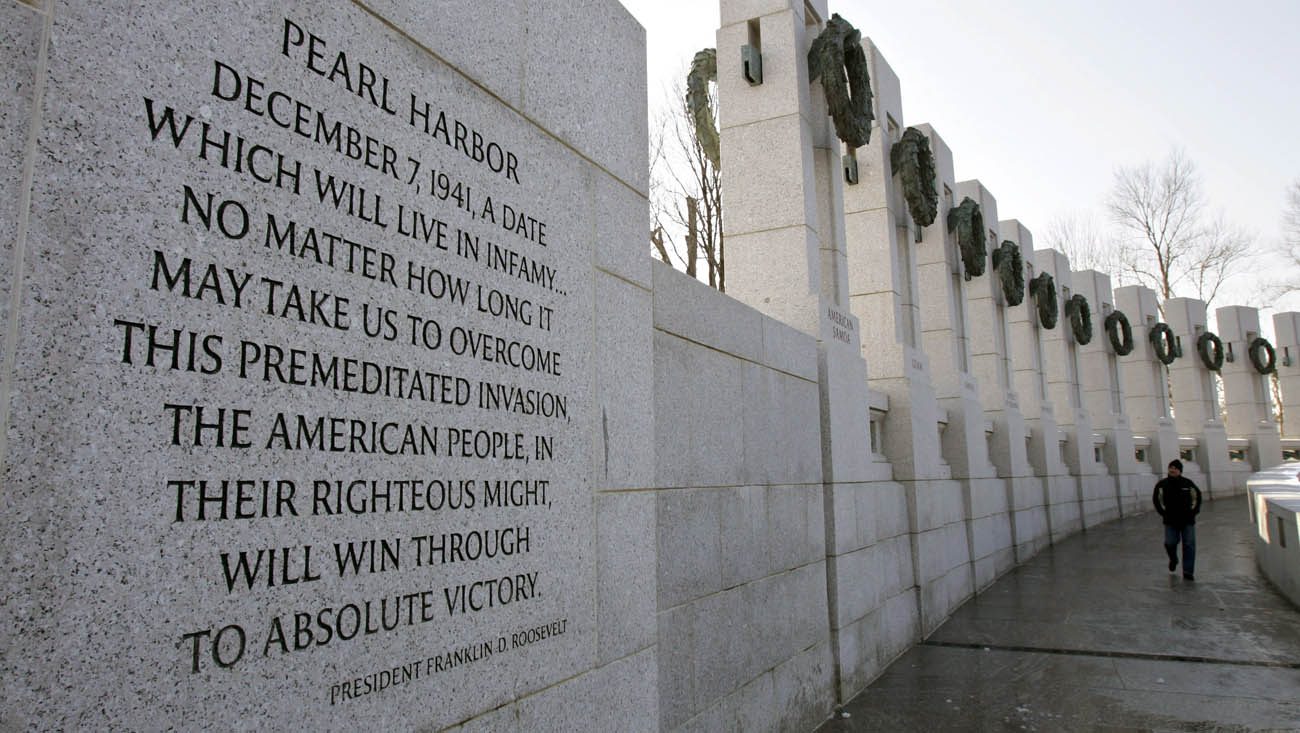 A visitors to the National World War II Memorial in Washington walks near a quote from President Franklin D. Roosevelt on Pearl Harbor Remembrance Day in 2015. Dec. 7 will mark the 75th anniversary of the attack.(CNS photo/Matthew Cavanaugh, EPA)

WASHINGTON (CNS) — A Catholic military chaplain and historian says the attack on Pearl Harbor, even 75 years later, continues to rivet the attention of Americans because it is “such a powerful event.”

As the anniversary of the Dec. 7, 1941, attack neared, Father Daniel Mode detailed the effect of the Japanese attack on the Hawaiian outpost.

“Before that, we were debating whether to get involved with World War II or not. We were basically a neutral country, trying not to get engaged in it. It (the attack) changed the tenor, and the president’s resolve, Father Mode told Catholic News Service. “It brought our country together to fight a common threat.”

Speaking in a telephone interview from the Pentagon, where he works for the chief of chaplains, Father Mode said he can see a parallel between Pearl Harbor and the 9/11 terror attacks.

“They’re both cataclysmic events that galvanized our country,” he said. “One was more obviously targeted toward the civilian population, one toward the military population,” the priest added, “but both certainly were defining moments in our country.”

As a child, young Daniel Mode lived at Pearl Harbor for four years while his father was on duty in the Navy.

“I vividly remember as a young kid — fourth-, fifth-, sixth-grade — going to the (USS) Arizona Memorial. As an altar server, I served Mass. It made a great impact on me. It was probably the seeds that were planted in my heart as I discerned my vocation to the priesthood. Pearl Harbor has made an amazing impact on my life.”

The lesson to be learned from Pearl Harbor, he said, is “always vigilance, to be vigilant. To use all sorts of opportunities for diplomacy, opportunities for peaceful engagement, to use all those opportunities ahead of time to engage with populations of other countries, but to be ever vigilant. We want to be friends, right? We have to have friends all over the world. But we have to be aware that not everyone wants to be our friend.” 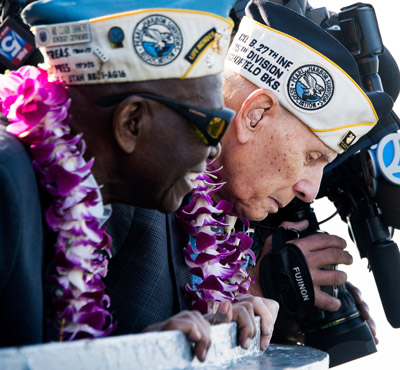 Pearl Harbor survivors Clark Simmons of Brooklyn, N.Y., and Aaron Chabin of Bayside, N.Y., look at the water after throwing a wreath into the Hudson River during a 2015 ceremony at the Intrepid Sea, Air and Space Museum in New York marking the 74th anniversary of the Japanese attack on Pearl Harbor. Dec. 7 will mark the 75th anniversary of the attack. (CNS photo/Justin Lane, EPA)

Ordained a priest of the Diocese of Arlington, Virginia, 24 years ago, Father Mode has spent most of his ordained ministry in the Navy Reserve, and the last 12 years in full-time chaplaincy, where he has attained the rank of commander. He’s currently six months into a three-year stint at the Pentagon, where his work, among other things, includes collecting data on all the work performed by chaplains.

He took a brief break from that work in October when he was selected to represent the Chaplain Corps at a funeral Mass in Dubuque, Iowa, in October for Father Aloysius Schmitt, a chaplain aboard the USS Oklahoma at Pearl Harbor, who pushed a dozen men out a narrow porthole to safety during the attack at the cost of his own life as the ship was sinking. He was the first U.S. chaplain to die in World War II. It was only recently that his remains had been positively identified.

“It amazed me, too, that 75 years later, it would be an amazing occasion that gathered so many people together, but that it made national news,” Father Mode told CNS.

Another heroic World War II chaplain Father Mode identified was Father Joseph O’Callahan, a Jesuit priest who was the Catholic chaplain aboard the USS Franklin, then a troop transport ship about 50 miles from the coast of Japan in March 1945, five months before the war ended. Father O’Callahan was awarded the Medal of Honor, the military’s highest honor, for organizing rescue and firefighting parties, leading men below deck to soak magazines that had threatened to explode — which would have catastrophically increased the death toll beyond the 800 who did perish — and administer last rites.

“He certainly comes to mind as a hero,” Father Mode said. “He did not die. He served, he went back to (the College of the) Holy Cross in Worcester, Massachusetts, to continue teaching math, which is what he did as a Jesuit priest. He is buried in the Jesuit cemetery at Holy Cross.”

Father Mode does not confine his historical research to World War II. For his master’s thesis in history, he wrote a book on Father Vincent Capodanno, a Navy Reserve chaplain who died while serving with the Marines in Vietnam in 1967, was affectionately called “the ‘grunt padre’ for his ability to relate well with soldiers and his willingness to risk his life to minister to the men.” “Grunt” is slang for a member of the U.S. infantry. The cause for his sainthood was formally opened in 2006.

PREVIOUS: Iraqi Christians in U.S. pray to reunite with family at Christmas