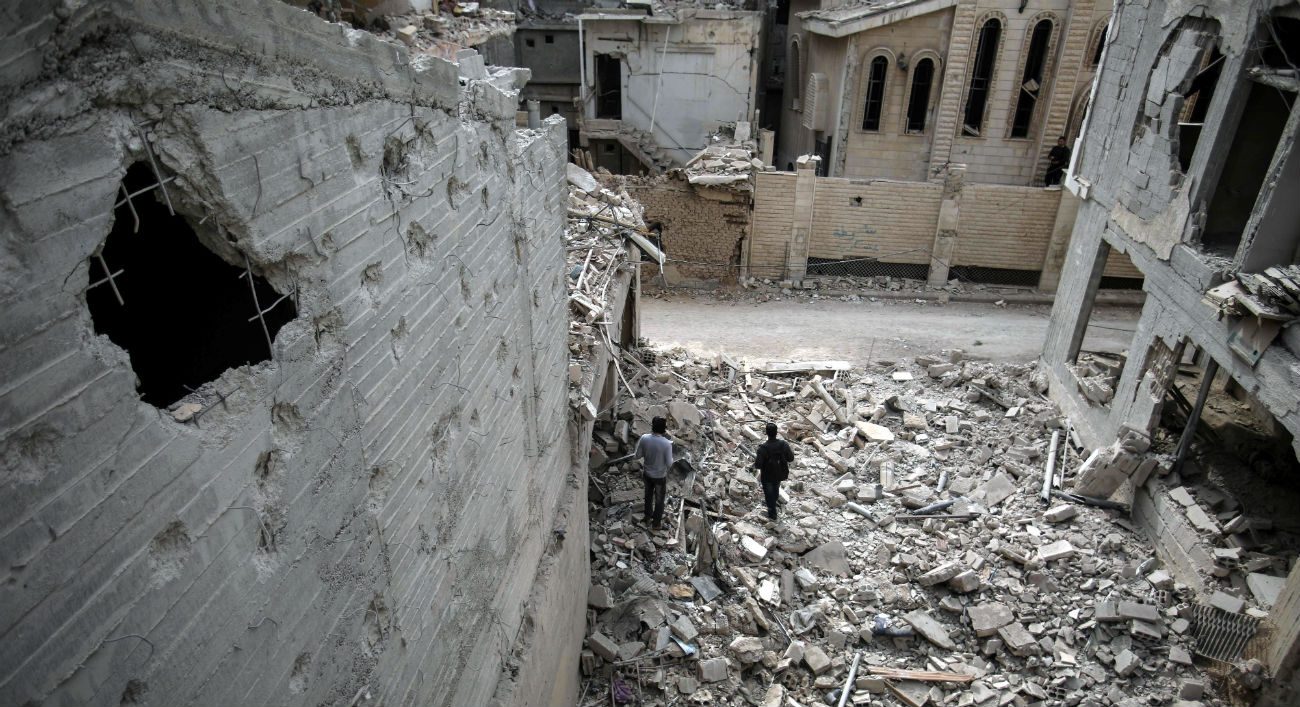 Men walk in rubble Nov. 13 near St. Mary's Catholic Church and St. Elias Orthodox Church after a bombing in Damascus, Syria. Christians in the Middle East face extinction because of genocide, wars and international indifference to their plight, said speakers at a Dec. 5 panel discussion in New York. (CNS photo/Mohammed Badra, EPA) 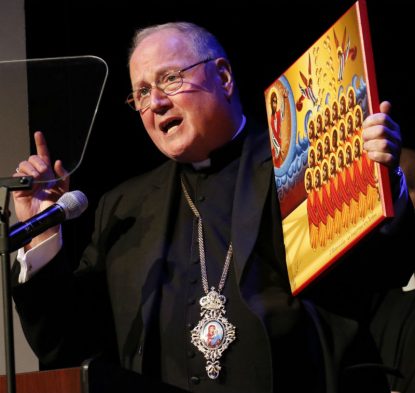 New York Cardinal Timothy M. Dolan holds an icon of the 21 Coptic Martyrs of Libya as he speaks during an interfaith forum on the crisis for Christians in the Middle East at the Sheen Center in New York City Dec. 5. (CNS photo/Gregory A. Shemitz)

NEW YORK (CNS) — Christians in the Middle East face extinction because of genocide, wars and international indifference to their plight, according to panelists at a Dec. 5 interfaith forum in New York.

A concerted multilateral effort to establish a safe haven for them while rebuilding their devastated homelands is preferable to massive permanent resettlement to other countries, including the United States, they said.

Twelve speakers at the Sheen Center for Thought & Culture event explored “The Crisis for Christians in the Middle East,” with a particular focus on vulnerable Christian minorities in Syria and Iraq.

Christians formed the majority in the Middle East until the Crusades in the 12th-14th centuries, but “the past thousand years haven’t been good in many ways,” said Jack Tannous, assistant professor of history at Princeton University.

Tremendous violence perpetrated against Christians led to widespread conversion, he said, and long periods of stasis have been punctuated by large-scale persecution and followed by immigration.

As a result, many Christians were effectively exterminated from the lands where they lived for centuries, said Michael Reynolds, associate professor of Near Eastern studies at Princeton University.

Genocide is the accurate description for the fate of Christians, especially in areas controlled by the Islamic State, speakers said.

Kristina Arriaga de Bucholz, executive director of the Becket Fund for Religious Liberty, said she appreciated that Christians were included in the March 17 genocide declaration by Secretary of State John Kerry, even if the inclusion, she added, was made with difficulty by the current administration and because “it’s popular to talk about minority religions.”

Kerry said the atrocities carried out by the Islamic State group against Yezidis, Christians and other minorities were genocide. 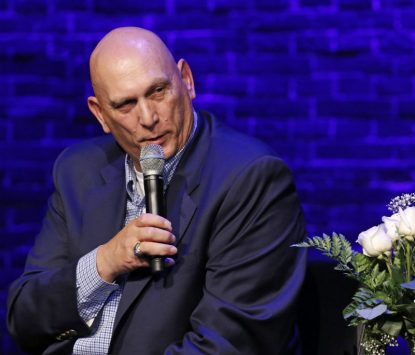 Retired U.S. Army Gen. Raymond Odierno speaks during an interfaith forum on the crisis for Christians in the Middle East at the Sheen Center in New York City Dec. 5. (CNS photo/Gregory A. Shemitz)

“Today we are witnessing the world’s indifference to the slaughter of Christians in the Middle East and Africa,” said Ronald S. Lauder, president of the World Jewish Congress and former U.S. ambassador to Austria. Referencing the Holocaust, he said, “Since 1945, genocide has occurred again and again. ‘Never Again!’ has become hollow. You can’t just declare genocide and say the job is done. You have to back it up with action.”

“Jews know what happens when the world is silent to mass slaughter. We learned it the hard way,” Lauder added.

“People turn off the Middle East because it’s so horrible,” Arriaga de Bucholz said, but having the U.S. declare genocide helps bring attention to the situation and opens the potential for action.

Msgr. John E. Kozar, president of Catholic Near East Welfare Association, said his organization works with the Eastern churches throughout the Middle East, an area not fully understood or appreciated by those in the Latin church.

The charitable and health care efforts particularly by women religious in largely Muslim areas have been well-received, and Christians and others have gotten along well, he said. Nonetheless, there is much outright suffering and persecution, he said.

“Syria is an absolute mess, but the church is still there,” Msgr. Kozar said. Lebanon is at or close to capacity with refugees. Jordan has the greatest concentration of refugees in the world, but its camps are plagued with extortion and a gangland mentality. Christians are considered third-class citizens in Egypt and still suffer reprisals after the ouster of the Muslim Brotherhood. Christians in Kurdistan and Iraq face different challenges.

“We are accompanying Christians who believe that somehow Our Lord will accompany and sustain them. We try to bring a reasonable stability,” he said.

Msgr. Kozar and other speakers underscored the deep historic and cultural connection of the Christians to their lands.

“There is a tug of war between the goodwill of people here in the West who want to welcome and adopt (the refugees) and presume it’s best to extract them from where they are, and the church leaders and most of the people who want to stay” in the region and return to their countries when it is safe to do so, Msgr. Kozar said. “Family, faith, and church are connected.”

Nina Shea, director of the center for religious freedom at the Hudson Institute, said the current administration’s lack of a religious test for aid dooms tiny minorities and the new administration must make sure Christians and other minorities get their fair share of aid destined for Syria and Iraq.

Also, the United Nations needs a plan to protect minorities. “Otherwise, they will become extinct,” she said.

Retired U.S. Gen. Raymond Odierno, former chief of staff of the U.S. Army, said during his lengthy leadership service in Iraq, he never had a specific mission to protect Christians. He said that was likely because there were bigger problems and if the U.S. singled out Christians, it might be interpreted by the Iraqis as trying “to force our religion on Iraq.”

Odierno said the new administration should be prepared to have a position on what happens to Christians when the fighting wanes in Syria. He advocated a multinational effort to establish a safe haven to protect Christians “until governments can receive them and place them back where they belong — or else, they’ll dwindle.”

The effort will only work if it is multinational and supported by the United Nations, he said. A solo effort by the United States would create a larger problem for Christians because it would look like the U.S. was unilaterally protecting Christians.

Odierno also suggested relocating Christians from the Ninevah Plain of Iraq to Kurdish-controlled areas during what he said could be a 10- to 20-year rebuilding process before they could return home. He could support a no-fly zone there if there’s a threat and if Russia participated, he said.

Odierno said it’s unclear if the U.S. and Russia can work together to protect Christians and he has not spoken to anyone in Russia, “but I believe we should be able to develop common ground on this.”

He said, “It’s up to us as a nation that supports all religions to assist when any religion is being attacked. We should be there and take a look at it … we may be judged 50 years from now.”

Cardinal Timothy M. Dolan of New York said when bishops visit him from the Middle East, “they don’t say a lot, but unfailingly cry and plead not to be forgotten. They feel desperate, alone and isolated.” He wore a Coptic pectoral cross, a gift to him from Egypt, and he displayed an icon of the Martyrs of Libya.

“We have a God who is calling us to a sense of justice, advocacy and charity. We cannot forget these people,” he said.

The event was organized by the Anglosphere Society, a nonprofit membership organization that promotes the traditional values of English-speaking peoples, in collaboration with the Archdiocese of New York and the Sheen Center for Thought & Culture.