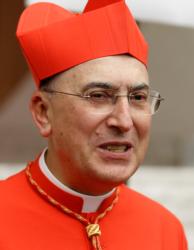 New Italian Cardinal Mario Zenari, the apostolic nuncio to Syria, is seen after a consistory at the Vatican Nov. 19. (CNS photo/Paul Haring)

UPDATED – VATICAN CITY (CNS) — Pope Francis urged Syrian President Bashar Assad to do everything possible to end the war in his country, to protect civilians and to ensure humanitarian agencies can deliver emergency aid to the people.

Syria’s SANA news agency reported Assad met Dec. 12 with new Cardinal Mario Zenari, the papal nuncio to Syria, and that the cardinal delivered a letter from the pope.

The Vatican confirmed the news a few hours later, saying in a statement that “in naming Archbishop Mario Zenari to the College of Cardinals, the Holy Father sought to show a particular sign of affection for the beloved Syrian people, so sorely tried in recent years.”

“In a letter sent through the new cardinal,” the Vatican statement said, “Pope Francis expressed again his appeal to President Bashar al-Assad and to the international community for an end to the to the violence” and for a “peaceful resolution of hostilities, condemning all forms of extremism and terrorism from whatever quarter they may come.”

The pope also asked Assad “to ensure that international humanitarian law is fully respected with regard to the protection of the civilians and access to humanitarian aid.”

After reciting the Angelus prayer Dec. 11 with people in St. Peter’s Square, the pope said that he is close in prayer to the people of the besieged city of Aleppo, Syria.

“We must not forget that Aleppo is a city and that there are people there: families, children, elderly, sick,” he said. “Unfortunately, we have become used to the war and destruction, but we must not forget that Syria is a country full of history, culture and faith. We cannot allow this to be negated by war, which is a pile of abuse and falsity.”

Maronite Archbishop Joseph Tobji of Aleppo told Catholic News Service by phone Dec. 13 that the Syrian army had liberated most of the city from ISIS the previous day. He said the Syrian army called for the terrorists to surrender and come forward without their weapons.

“Unfortunately, there was no surrendering,” Archbishop Tobji said, adding that Aleppo is still 1 percent or 2 percent under control of the Islamic State.

Yet, because the city is nearly completely under Syrian army control, “the people are celebrating,” the archbishop said.

Like a parade, “there were car convoys, people marching everywhere, expressing their joy,” he said.

As for the future for Aleppo, Archbishop Tobji said the international community was “always against the wishes of the Syrian people.”

“Now that we’re looking toward the future, we’re hoping that the wishes of the Syrian people will be taken into consideration,” he said.

Archbishop Tobji noted that “there is a lot to rebuild” and it will be a “huge challenge” to put the economy on the right track “after all this destruction.”

He commended Pope Francis’ Dec. 12 letter to Assad, noting that the letter would impact people’s lives, “encouraging them in their daily tasks.”

“It gives the people hope,” the archbishop added. “It’s always a plus for the people to hear from the church’s highest authority such words of encouragement and support.”

PREVIOUS: Give flesh to the Gospel like Mary did, pope says on Guadalupe feast