In multicultural Lebanon, Nativity scenes are common in public places 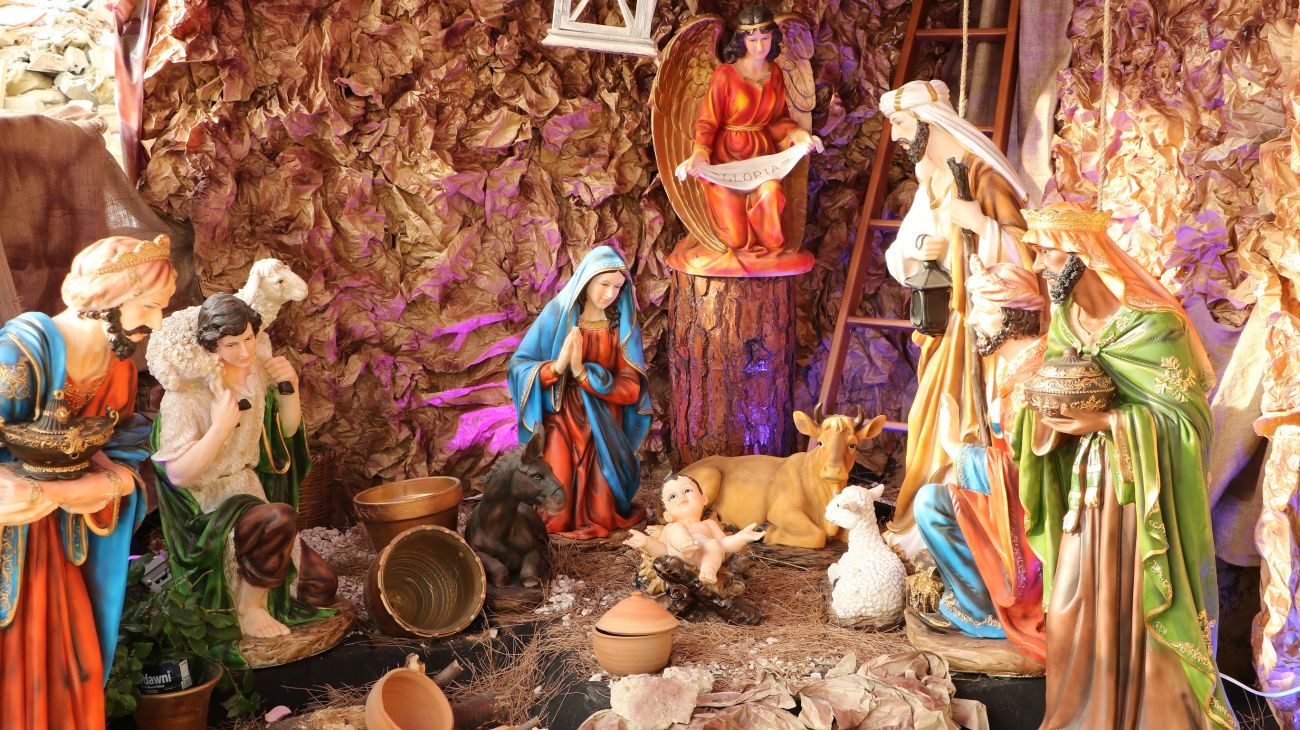 This outdoor manger, pictured Dec. 12 at St. Talka Maronite Catholic Church in Beirut, is steps away from a busy intersection. The "reason for the season" is evident in Lebanon, with the manger, or creche, even sometimes included among glistening Christmas decorations throughout the country. (CNS photo/Johnny Antoun)

BEIRUT (CNS) — Amid the turmoil in the Middle East and persecution of Christians in surrounding countries, the Christmas spirit is evident in Lebanon: sparkling lights, decorated trees and even mangers in public places.

“Wherever you go you can find Christmas decorations,” even in the cities and the places where the residents are Muslim, Maronite Father Joseph Soueid told Catholic News Service.

“I feel that here in Lebanon, we have this grace, that really, Jesus is the reason for the season,” said the priest, pastor of St. Takla Parish, which serves 6,850 Maronite Catholic families. With seating for just 280 people, the church overflows with the faithful for each of its eight Masses on Sundays and has generated 24 vocations in the past eight years. Its outdoor manger near the entrance to the church is just a few steps away from a busy street intersection.

Father Soueid noted that because most of the municipalities in Lebanon are a mix of Christian and Muslim, the influence of Christianity gives the Lebanese an opportunity to “make this season a season of joy.”

Muslims also have attended and continue to attend Christian schools in Lebanon. So it follows that “when they grew up, they found themselves familiar with our traditions and with the way we celebrate our great celebrations, like Christmas, like Easter,” Father Soueid said.

The splendor of Christmas is not only a feast for the senses in Lebanon, but also a witness of Christianity, he said.

“Sometimes you can feel the spirit of Christmas by the choirs that come out of the churches during this season to public places to sing the glory of Jesus,” Father Soueid added.

“That’s why I consider that in Lebanon, we do not have a big problem when we spread the good news” through the media, on TV, magazines, “everywhere,” he said. “We can share the way we think openly without having any fear of the others. Because they accept us.”

At City Mall, huge cutout stars, glistening Christmas trees and garlands adorn the tri-level shopping concourse. There is also a sprawling, rustic, miniature crafted scene reminiscent of a Lebanese red-roofed village from centuries ago: women at the well with jugs of water, shepherds with their sheep, people gathering in the center square.

The Nativity is prominently featured in the display. Nestled in a cave, Mary and Joseph lovingly gaze upon the newborn King, his arms outstretched, lying in a simple manger illuminated with a soft light. Livestock surround the Holy Family. Outside the cave, the Wise Men have already arrived to pay homage to the savior; a shepherd tends to his sheep, with his head cocked toward baby Jesus.

Shoppers stroll by — Christians and Muslims — many stopping to get a close look at the magical scene and to snap pictures. Young children typically rush ahead of their parents to step up and lean against the translucent railing to get the closest view possible.

That’s just what 5-year-old Angelina Youssef did, arriving ahead of her mother, Samar, who pushed 1-year-old Roy in a stroller.

“It’s amazing,” the mother said of the mall’s manger display. “Kids like it. We come every year to see it. It gives us the Christmas spirit.”

Gazing at the manger, Samar Youssef, a Maronite Catholic from Beirut, said: “Everything sparkles. Christmas is when Jesus was born, so we must always remember this before we think about trees and gifts. Jesus is the joy of Christmas.”

Grace Abou Tayeh smiled as her 1-year-old son, Joe, looked with wonder at the creche.

“I like when my son sees Jesus inside so he won’t forget what’s the meaning of this holiday,” she told CNS.

Her husband, Charbel Abou Tayeh, also Catholic, pointed to the appeal of Christmas within other faiths.

“The birth of Jesus is for all mankind, so no matter what the religion is — Christian, Muslim — it’s for everyone, so we all share the happiness of Christmas here in Lebanon,” said Charbel Abou Tayeh.

“And I’m seeing it, even all my Muslim friends have (Christmas) trees, and some even have the baby Jesus in their houses,” he said, calling it an example of “the unique culture of our country.” With 18 religious sects represented in Lebanon, he added, “we’re still hanging on here,” referring to the Christian presence.

In Beirut’s Sassine Square, a life-size manger scene is featured next to a towering cone-shaped Christmas tree. Mary and Joseph — an angel between them — look upon the empty crib, filled with straw.

Admiring the site as he passed, George Abdul Malak, a Greek Orthodox from Beirut, told CNS, “It’s a part of our culture that even in homes in Lebanon, we find this accompanying the tree all the time, the creche.” He added that many people wait until Christmas Eve to put baby Jesus in the crib.

“Maybe globally we don’t find the custom of creches, we find (Christmas) trees more,” Abdul Malak said. But in Lebanon, the presence of a creche in a public place “means that we have some kind of freedom of expression.”

Karim Al Younis, a Shiite Muslim visiting Lebanon from Basra, Iraq, stopped to gaze at the manger scene. Asked how he feels about the display, he told CNS, “What can you see here, except peace, love and family?”

PREVIOUS: Best gift this Christmas is God giving the world his son, Jesus

NEXT: Reform is more than just a face-lift, pope tells Curia