Best gift this Christmas is God giving the world his son, Jesus 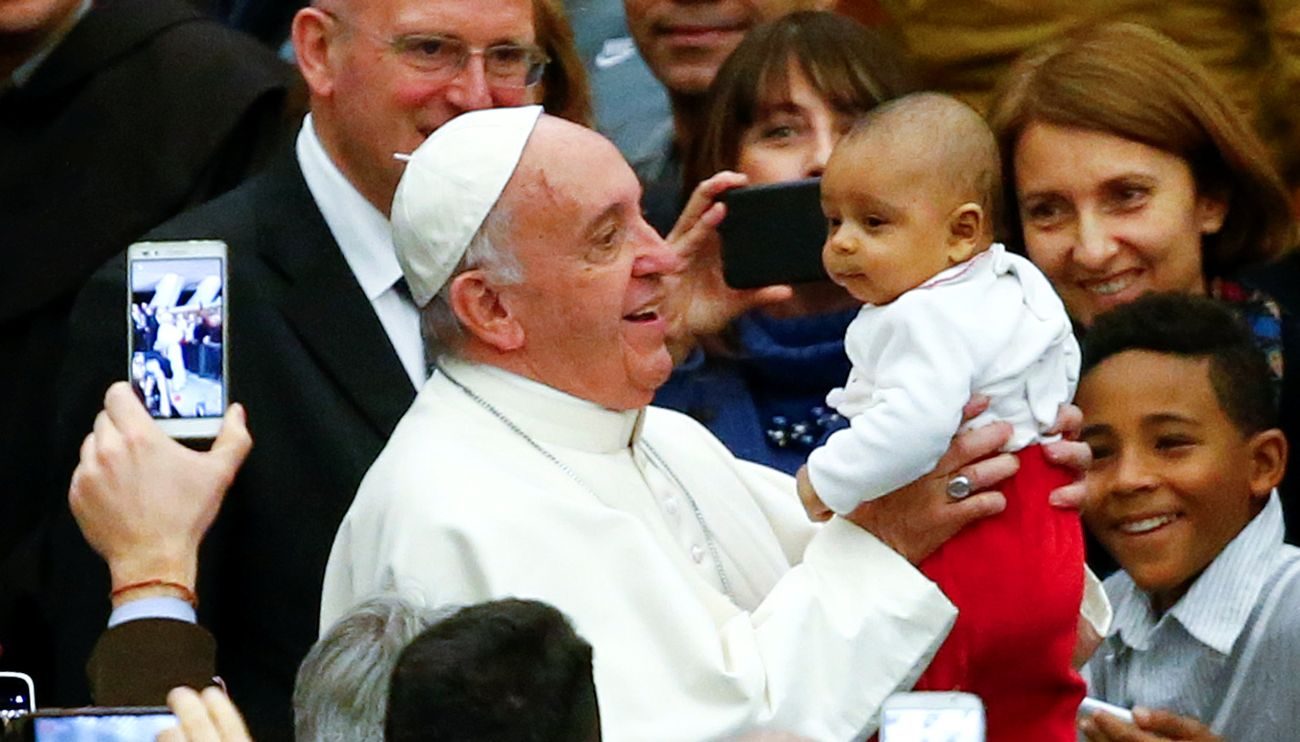 Pope Francis holds a child as he arrives to lead a special audience with Vatican workers Dec. 22 in Paul VI hall. While exchanging gifts for Christmas is a beautiful tradition, Pope Francis said, do not forget the one and only real gift people will ever receive is God's gift to humanity -- his son, Jesus Christ. (CNS photo/Tony Gentile, Reuters)

VATICAN CITY (CNS) — While exchanging gifts for Christmas is a beautiful tradition, Pope Francis said, do not forget the one and only real gift people will ever receive is God’s gift to humanity — his son, Jesus Christ.

Also be sure to thank God for the gift of employment and pray for all those who are jobless or experience injustice and exploitation at work, he told Vatican employees during a special audience in the Vatican’s Paul VI hall Dec. 22.

As Christmas carols in multiple languages played over the public announcement system, many children offered small gifts or notes to the pope, who celebrated his 80th birthday Dec. 17. Some people wore colorful Christmas sweaters, or others, including one small baby, had on red Santa Claus hats.

Multiple generations were present, with employees allowed to bring their parents, grandparents, children and newborns. Families whose members had special needs were seated in the front and were each greeted personally by the pope after the audience. The pope’s chief bodyguard, Domenico Giani, alternated between providing security and doing cellphone-camera duty when he obliged people’s requests to take their picture with the pope.

The pope continued a tradition he began in 2014 of inviting people who work at the Vatican, along with their family members and loved ones, to receive pre-Christmas greetings. The now-annual meeting follows a longer-held tradition of the pope meeting with members of the Roman Curia — the church’s central administrative offices — as well as cardinals living in Rome and members of the papal household.

Pope Francis thanked the Vatican employees, most of them laypeople, for their hard work and dedication, recognizing that the small size of Vatican City often made coordination and cooperation a lot easier.

“We always have to thank God” for the gift of employment, he said, which is important for an individual’s well-being and entire families, he said.

He then asked for prayers for all those around the world, “who do not have work, or else, who often do jobs that are inappropriate, poorly paid or harmful to one’s health.”

The pope requested that everyone, according to their responsibilities, make sure jobs respected people’s dignity and their families and followed the Catholic Church’s social teaching.

The Vatican, above all, he said, must follow these Gospel guidelines, which also meant doing nothing deceitful or illegal in its employment arrangements — “nothing under the table.”

NEXT: In multicultural Lebanon, Nativity scenes are common in public places