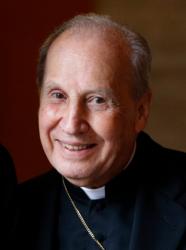 VATICAN CITY (CNS) — Pope Francis expressed condolences to the members of Opus Dei following the death of Bishop Javier Echevarria, who led the prelature for over 20 years.

The 84-year-old bishop, who once served as secretary to the personal prelature’s founder, St. Josemaria Escriva, passed away Dec. 12.

Expressing his condolences, Pope Francis said Bishop Echevarria, like his predecessors, “gave his life in a constant service of love to the church and to souls.”

“I join you in your prayers of thanksgiving to God for his paternal and generous witness of priestly and episcopal life,” the pope told Opus Dei members.

The Spanish bishop’s death came one week after he was admitted to Rome’s Campus Biomedico hospital for a pulmonary infection, according to the Opus Dei website.

“Bishop Echevarria was receiving an antibiotic to fight the infection. The clinical outlook was complicated in his last hours when difficulty breathing resulted in his death,” the website said.

Calling the bishop’s death “unexpected,” Pope Francis assured the Opus Dei members of his prayers and entrusted Bishop Echevarria’s soul to Our Lady of Guadalupe, “on whose feast day he gave his soul to God.”

In an interview with Vatican Radio, Msgr. Fernando Ocariz, vicar general of Opus Dei, said he administered the last rites shortly before Bishop Echevarria’s death and that while the prelature is saddened by his death, they are also peaceful “because a good person has gone to heaven who we know will help us from there.”

“He lived with two saints: with St. Josemaria for many years and later with Blessed Alvaro del Portillo,” the founder’s successor. “And from them he learned to be very faithful to the church, to the pope and to souls,” Msgr. Ocariz said.

Born June 14, 1932, Bishop Echevarria was appointed St. Josemaria Escriva’s personal secretary in 1953. Following his ordination in 1955, he continued assisting the founder of Opus Dei until his death in 1975.

After St. John Paul II designated Opus Dei as a personal prelature in 1982, Bishop Echevarria was named vicar general. He was elected head of the prelature after Blessed del Portillo died, and was made a bishop by St. John Paul II in 1995.

Bishop Echevarria was also a member of the Congregation for Saints’ Causes and the Supreme Tribunal of the Apostolic Signature and participated in several meetings of the Synod of Bishops.

Bishop Echevarria’s body was to lie in repose at the prelature’s Church of Santa Maria della Pace in Rome until his funeral, which was scheduled for Dec. 15 in Rome’s Basilica of St. Eugenio.

After a period of mourning, members of Opus Dei will convene to elect a new prelate and await Pope Francis’ approval of the nomination.