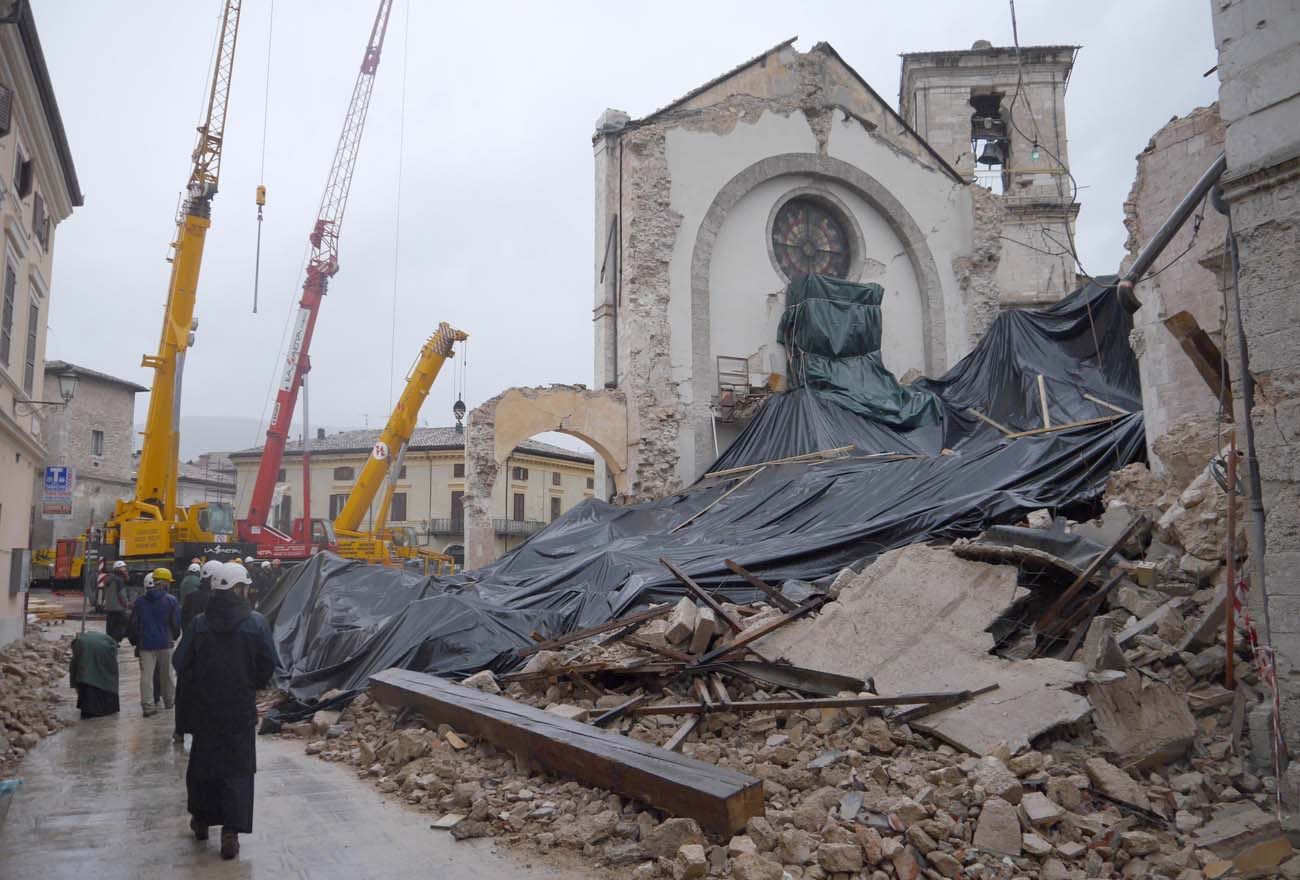 Monks from the Monastery of St. Benedict in Norcia, Italy, visit the site of their collapsed basilica, which was destroyed during the magnitude 6.5 earthquake that struck the town Oct. 30. (CNS Photo/Courtesy the Monks of Norcia)

ROME (CNS) — The Latin-liturgy chanting, beer-brewing Benedictine monks of Norcia, Italy, the birthplace of St. Benedict, are living and praying in temporary structures after an earthquake in August damaged their buildings and a big quake in late October razed their basilica, except for the facade.

The monks have not been able to brew beer since before the summer quake, but in a newsletter to supporters in mid-December, they reported that bottles shipped earlier to the United States are available for Christmas gift giving. Their U.S. online store — birranursia.com/purchase/ — has all the details.

“The monastic presence in Norcia is extremely important for the identity of the town, so rebuilding the monastery means giving new life to a town that finds itself sorely tried,” the monks wrote on the website. “Our neighbors count on our solidarity, both spiritual and material.”

Before the earthquakes, the monks were tithing 10 percent of beer profits to charity. Now, they said, 15 percent of profits will go to charity and a portion of all earthquake-recovery funds raised will be used to help the people of Norcia rebuild.

Outside of Norcia, the monks have set up a temporary monastery, and they announced in early December that Sunday morning Masses open to the public would be celebrated in their makeshift Chapel of St. Andrew.

“The brewery, which was located in the basement of the now-ruined monastery, was largely spared of any damage,” according to the monks’ website. But local officials declared the building unsafe and off limits.

“All of the brewing equipment that has made the beer you’ve all come to love will be salvaged, and, as soon as possible, transferred to a new brewing location outside the city walls,” the monks said. “This may take a few months to find a suitable space, and therefore, brewing is suspended until an alternative brewing quarters is secured.”

NEXT: Marriage advice: Make time for each other, especially at Christmas