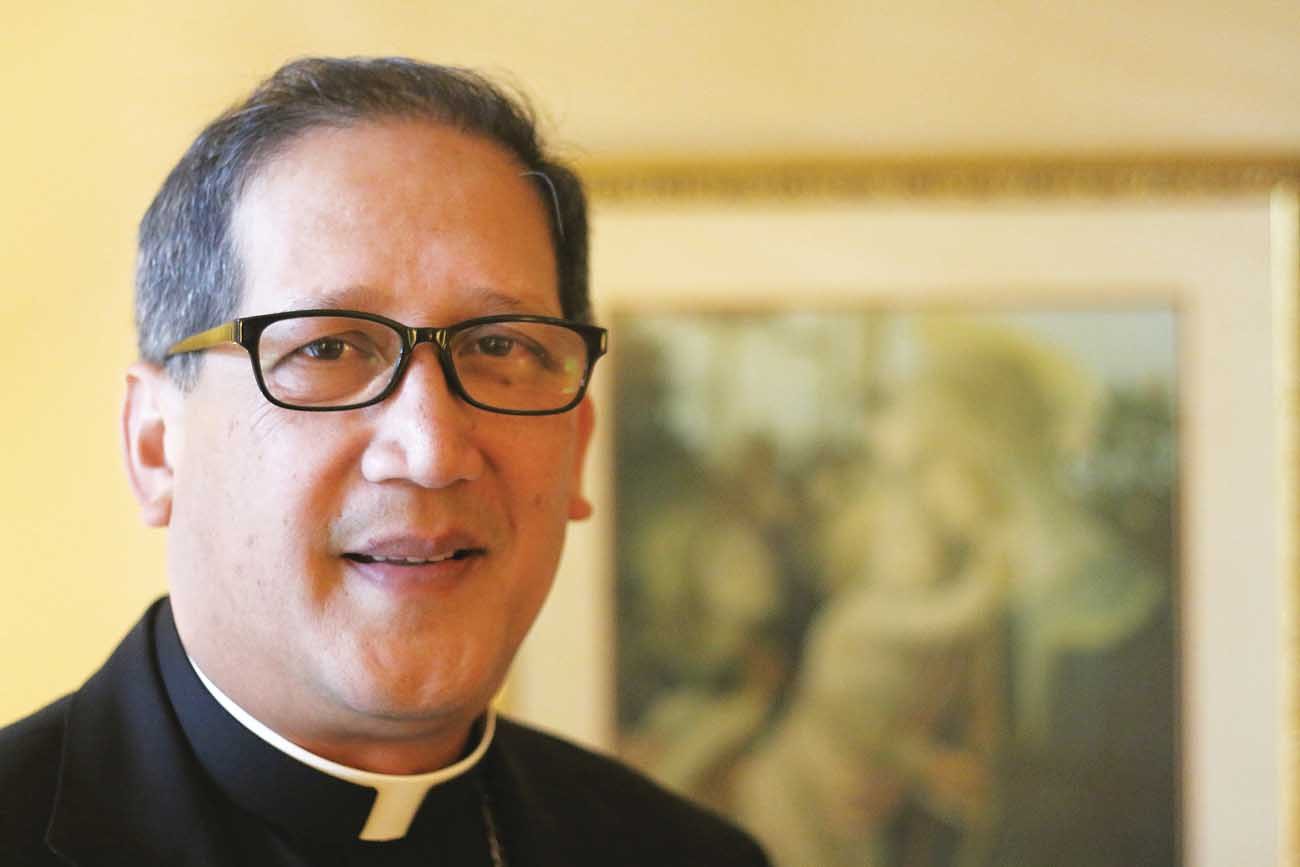 Pope Francis has named Auxiliary Bishop Oscar A. Solis of Los Angeles as bishop of Salt Lake City. The first Philippine-born prelate to head a U.S. diocese, Bishop Solis is pictured in a Jan. 5 photo. (CNS photo/J.D. Long-Garcia, The Tidings)

Bishop Solis, 63, a native of San Jose City, Nueva Ecija, Philippines, has been auxiliary bishop of Los Angeles since 2004. Previously, he served the Archdiocese of Manila and the Diocese of Cabanatuan, both in the Philippines, before coming to the United States in 1984.

The appointment was announced Jan. 10 in Washington by Archbishop Christophe Pierre, apostolic nuncio to the United States.

At a news conference at diocesan offices where he was introduced, Bishop Solis said the visit was only his second in Utah, but he pledged to quickly learn about the Catholic community of 300,000 people.

“I humbly submit myself to you as the new servant leader of the Diocese of Salt Lake City and a shepherd for the people of the state of Utah,” he said.

Bishop Solis said he worked “very hard” for the past 13 years in the Los Angeles Archdiocese. “I would like to emphasize the words ‘very hard,'” he said, to laughter from those gathered at the news conference. “And lo and behold, I received a very surprising and shocking phone call informing me that Pope Francis was asking me to become the 10th bishop of Salt Lake City.”

The call from Archbishop Pierre was “a curveball out of nowhere,” Bishop Solis said, recalling how he asked, “Am I in trouble?” But the nuncio “made me feel at peace” with the assignment, the bishop said.

After the call, the bishop said his life changed completely, and he felt that the “world stopped turning around.” He felt afraid of the uncertainties and that the human element somehow overcame the grace of God.

“I was living and working comfortably in Los Angeles,” he said, thinking it would be the place in which he retired, “but the walls of heaven were made open, and a voice came out and said, ‘You fool!’ Because man proposed and God disposes.”

Since receiving the appointment, he has learned about Catholic Community Services’ and other pastoral outreach to the poor and needy. He said he looked forward to hearing the voices of the well-known Madeleine Choir School students and work with The Church of Jesus Christ of Latter-day Saints to enhance the well-being of all the people of Utah.

Bishop Solis’ installation is March 7 at the Cathedral of the Madeleine in Salt Lake City.

The Diocese of Salt Lake City has been without a bishop since Archbishop John C. Wester was installed in the Archdiocese of Santa Fe June 4, 2015.

Bishop Solis earlier told the Angelus News, the archdiocesan multimedia platform, that his appointment is “a recognition of the diversity of the church in America and the universality of the church.” He added, “I know what it means to be a pastor, a shepherd of a particular diocese. It is a tremendous blessing and a responsibility and a privilege to be of service to the local church in the United States of America, coming from the Philippines.”

He said he would miss friends and priests in Los Angeles. “But I know God has something in store for us when he leads us to a new place,” he said. “I have wonderful priests in Utah and wonderful people. I know we won’t go wrong if we work together as a church, as a community. God will provide the rest.”

He added that there’s always a reason when God puts you in a new place.

“It’s always God’s will. I don’t have expectations. I don’t have any hidden, personal agenda,” he said. “I’m just going with an open heart and an open mind, with the willingness to embrace and love the people that I will shepherd, to listen to them, and to establish a beautiful working relationship to build the local church in Utah.”

“Our loss will be a gift to the family of God in Salt Lake City,” he said. “I know that Bishop Solis will be for them a model of prayer and compassion and a great bishop. And I fully expect that he will become the leading voice for the millions of Filipino Catholics in this country, who are a beautiful sign of growth and renewal in our church and in our country.”

After arriving in the U.S., Bishop Solis served as associate pastor of St. Rocco Church in Union City, New Jersey, from 1984 to 1988 and was incardinated in the Diocese of Houma-Thibodaux, Louisiana, in 1988 and served as a parish priest for 15 years prior to his appointment to Los Angeles.

In Los Angeles, Bishop Solis served in a variety of roles, including as vicar for Ethnic Ministry from his ordination in 2004 until 2009. He also served as the director of the Office of Justice and Peace from 2005 to 2009. Then he was assigned to the San Pedro Pastoral Region, covering southern Los Angeles County, where he serves today.

Contributing to this report were Marie Mischel, editor of the Intermountain Catholic, newspaper of the Salt Lake City Diocese, and J.D. Long-Garcia is editor-in-chief of Angelus News, the multimedia platform of the Archdiocese of Los Angeles.

NEXT: Georgia woman killed by gunman at Florida airport was parish stalwart