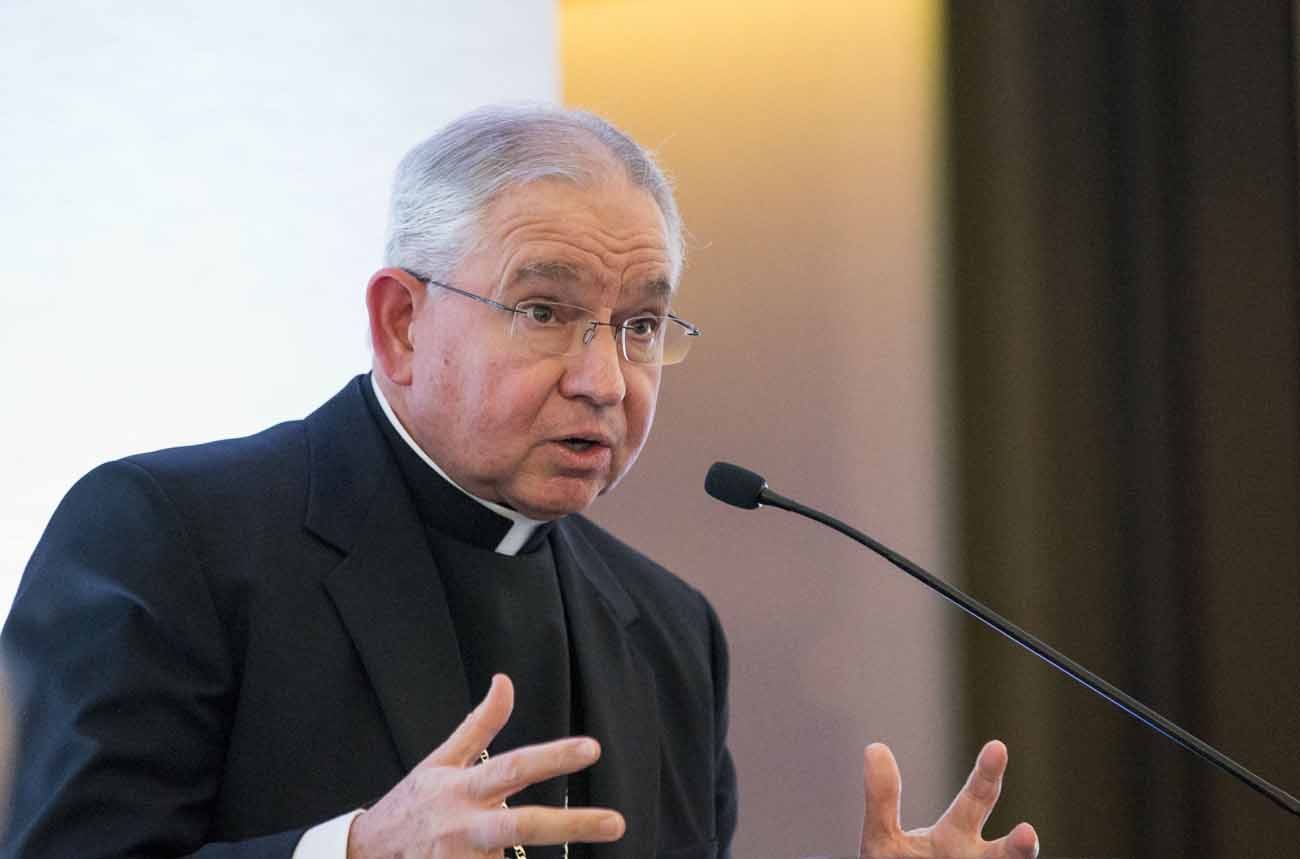 Archbishop Jose H. Gomez of Los Angeles, who is vice president of the U.S. Conference of Catholic Bishops, gives the closing keynote address Jan. 19 at Vatican-sponsored conference on mass migration and humanitarianism at the University of California in Los Angeles. (CNS photo/J.D. Long-Garcia, Angelus News)

LOS ANGELES (CNS) — On the eve of Donald Trump’s inauguration as U.S. president, Los Angeles Archbishop Jose H. Gomez renewed the call to recognize the humanity of immigrants at a Vatican-sponsored migration conference at the University of California in Los Angeles.

“The fundamental crisis that forced displacement and mass migration are generating represents the most significant concern of all men and women of good faith,” said Marcelo Suarez-Orozco, a UCLA professor who specializes on migration. “Our work was inspired by so many of our colleagues here today.”

Suarez-Orozco and Msgr. Marcelo Sanchez Sorondo, a professor at Maria Santissima Assunta Free University in Rome, served as the conference chairs. The city of Los Angeles, home to millions of immigrants, was an appropriate location to host the dialogue, Suarez-Orozco said when introducing Archbishop Gomez.

“Tonight — in this city and in immigrant neighborhoods all across this country — there is a lot of fear, a lot of uncertainty and a lot of anger,” the archbishop said. “Because our new president campaigned with harsh rhetoric about foreigners and sweeping promises to deport millions of undocumented immigrants.”

Los Angeles is home to an estimated 1 million immigrants in the country without legal permission, he said. The archbishop also said that politics is not the answer.

“We know that both political parties are exploiting the immigration issue for their own purposes,” he said. “That is sad to say, but it is true. And it has been happening for years.”

While expressing concerns about the incoming president, Archbishop Gomez also noted that President Barack Obama had deported more immigrants than any administration in U.S. history — 2.5 million over the past eight years.

“The vast majority of those that we are deporting are not violent criminals,” he said. “In fact, up to one-quarter are mothers and fathers that our government is seizing and removing from ordinary households. Nobody talks about this, but we see it every day here in L.A. When the government comes to deport people, they are taking away some little girl’s dad, some little boy’s mom.”

The estimated 11 million immigrants living in the U.S. illegally arrived over the past 20 years, the archbishop noted. The government at every level failed to enforce immigration laws, he said.

Most of these immigrants have been in the country for at least 10 years, he said, and nearly half live with a spouse and children. The reason, he said, is that government has failed to act. That’s despite a broad public consensus for “compassionate and reasonable” solutions to the broken immigration system.

“When you look into the eyes of a child whose parent has been deported — and I have done that more than I want to — you realize how inadequate our politics are,” said the archbishop, who noted he came to the U.S. as an immigrant from Monterrey, Mexico, and has been a naturalized U.S. citizen for more than 25 years.

Following the theme of the workshop, Archbishop Gomez said immigration is part of a bigger challenge of globalization, de-industrialization and new economic challenges.

“It’s not a matter of building walls. That won’t solve anything,” the archbishop said.

During a question-and-answer period, he underscored that it is still unclear what the Trump administration will do about immigration. In the meantime, dioceses throughout the country are finding ways to protect immigrants while seeking to dialogue with the new administration. In Los Angeles, ongoing efforts have educated immigrants in the U.S. without documents about their rights when facing deportation.

Yet the entire community needs to be educated, the archbishop said, applauding workshop participants for efforts to deepen understanding of the emerging, multicultural reality worldwide.

Maurice Crul, a professor at Free University in Amsterdam who gave a presentation on the education of refugee children during the conference, said the changing demographics in the United States are part of a global phenomenon.

Europe, which has experience an influx of immigrants and refugees, can provide insights to the U.S., he said. European nations have tried various approaches with various degrees of success.

“The real solution to the populist movement is that we have to adapt the system so that we have good outcomes for everybody,” Crul said. “People (dropping out of school), being unemployed — that is not a good outcome.”

Crul also said the election in the United States demonstrated that academia needs to do a better job explaining social trends. Academic discourse has not convinced the general public, he said.

Those who voted for Trump, Crul said, have many things in common with those who did not.

“Any family has the same concerns,” he said. “They want safety. They want their children to do well in school. So we have to find common ground. That is difficult because we naturally want to draw back into our own bubble when we encounter those with other opinions. But the real change will happen when we find where we align.”

NEXT: Pope offers prayers for Trump as he becomes 45th U.S. president