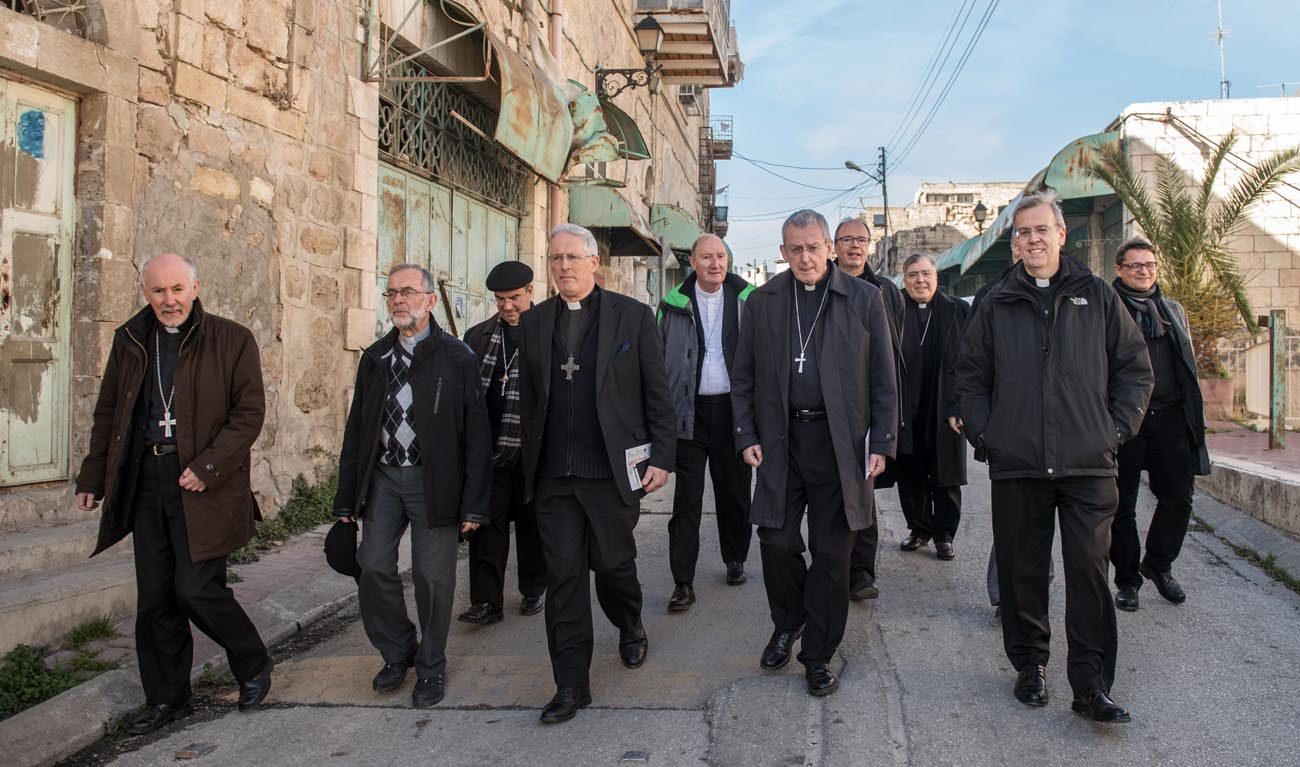 Bishops from the U.S, Canada and Europe walk through a street Jan. 16 in Hebron, West Bank. (CNS photo/Marcin Mazur, Bishops' Conference of England and Wales)

JERUSALEM (CNS) — Christians have a responsibility to oppose the construction of Israeli settlements in Palestinian territories, said bishops from the U.S., Canada and Europe.

“This de facto annexation of land not only undermines the rights of Palestinians in areas such as Hebron and East Jerusalem but, as the U.N. recently recognized, also imperils the chance of peace,” said bishops who participated in the Holy Land Coordination Jan. 14-19.

“So many people in the Holy Land have spent their entire lives under occupation, with its polarizing social segregation, yet still profess hope and strive for reconciliation. Now, more than ever, they deserve our solidarity,” said the statement, issued Jan. 19, at the end of the visit.

Bishop Oscar Cantu of Las Cruces, New Mexico, chairman of the U.S. bishops’ Committee on International Justice and Peace, was among the 12 bishops who signed the statement. Bishop Lionel Gendron of Saint-Jean-Longueuil, Quebec, represented Canadian bishops. The statement also was signed by representatives of the Council of European Bishops’ Conferences, the Commission of the Bishops’ Conferences of the European Community and the Southern African Catholic Bishops’ Conference, as well as bishops from the United Kingdom and other European countries.

During their visit, the bishops visited Hebron, West Bank, where the main market area is closed off to accommodate the security needs of some 800 Israeli settlers. Afterward, Bishop Cantu told Catholic News Service, “It becomes clearer that (the settlements) are not just about outlying settlements but something more systematic; more about infiltrating Palestinian land and forcing Palestinians out by making them so uncomfortable with such limited freedom they don’t want to continue living there.”

Three of the bishops also visited the Gaza Strip, where an Israeli blockade has made it difficult to get supplies for reconstruction of buildings destroyed by Israeli shelling. Bishop William Nolan of Galloway, Scotland, one of the bishops who visited Gaza, said he left feeling “sad and helpless” at the poverty and lack of basic commodities.

In 2006, a government led by Hamas was elected in Gaza. Israel, the United States and the European Union have listed Hamas — an Islamic political party with an armed wing — as a terrorist organization and have imposed economic sanctions against Gaza.

In their statement, the bishops said Christians had a responsibility to help “the people of Gaza, who continue to live amid a man-made humanitarian catastrophe. They have now spent a decade under blockade, compounded by a political impasse caused by ill-will on all sides.”

They also said Christians must continue to encourage nonviolent resistance, as encouraged by Pope Francis.

“This is particularly necessary in the face of injustices such as the continued construction of the separation wall on Palestinian land, including the Cremisan Valley,” the statement said.

The barrier is a series of cement slabs, barbed wire fences and security roads snaking across part of the West Bank. If completed as planned, the separation wall would stretch nearly 400 miles and restrict the movements of 38 percent of residents of the West Bank. Israel maintains that the barrier contributed significantly to a decrease in the number of terrorist attacks, while Palestinians contend that the barrier is simply another Israeli land grab, imprisons them and imposes travel limitations.

The bishops said that each year since 1998, they have called for justice and peace, “yet the suffering continues.”

“So this call must get louder,” their statement said. “As bishops, we implore Christians in our home countries to recognize our own responsibility for prayer, awareness and action.”