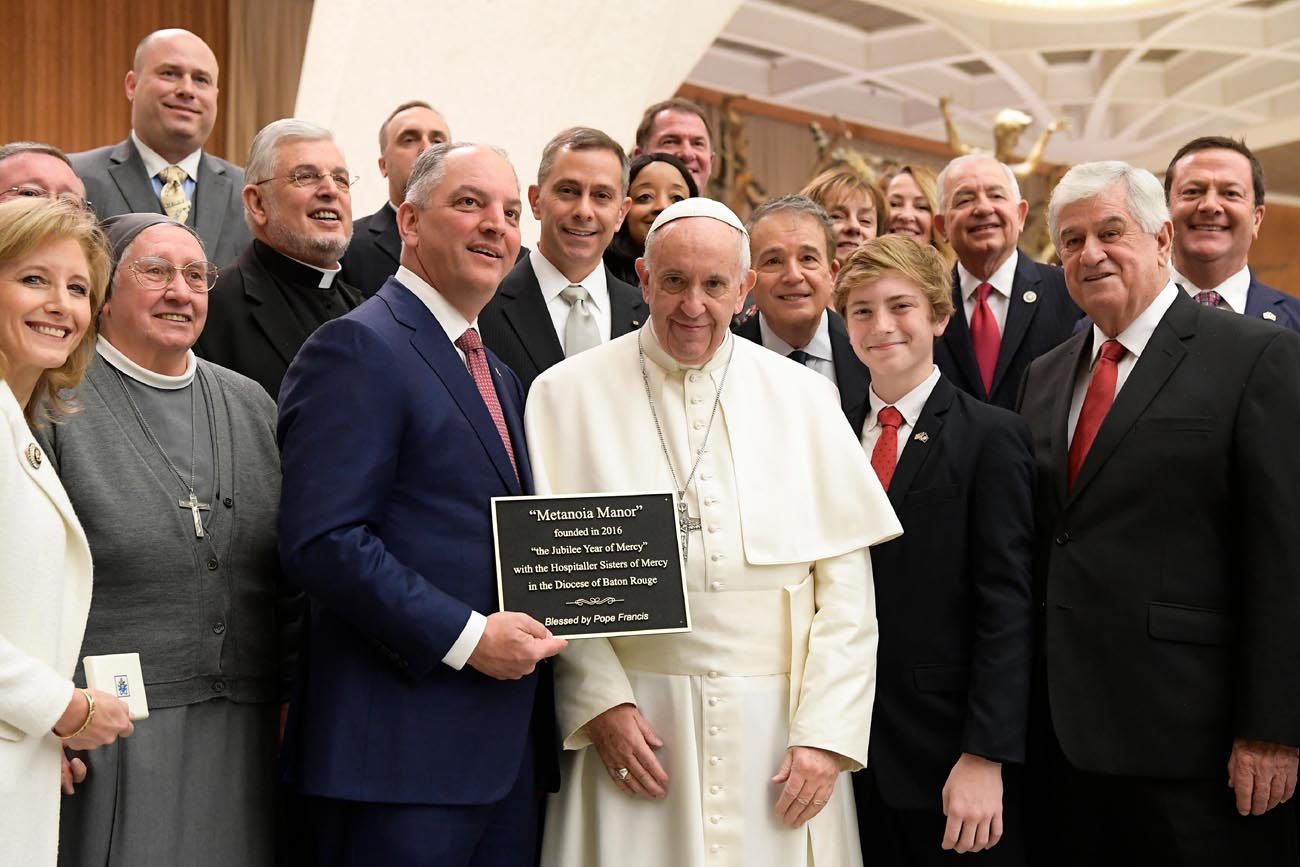 Pope Francis poses for a photo with Louisiana Gov. John Bel Edwards and his delegation during the pope's general audience at the Vatican Jan. 18. (CNS photo/L'Osservatore Romano, handout)

VATICAN CITY (CNS) — When Pope Francis posed for a photo Jan. 18 with Louisiana Gov. John Bel Edwards, it was not a protocol-dictated nicety; it was a recognition of the commitment on the part of the pope and of a coalition of state and private agencies in Louisiana to stop human trafficking.

Joining the pope and governor for the photo-op were Col. Mike Edmonson, state police superintendent, and state legislators; Father Jeff Bayhi, pastor of St John the Baptist Catholic Church in Zachary; and Consolata Missionary Sister Eugenia Bonetti, who has been a leading figure in the work of women religious to assist victims of trafficking, especially women forced into prostitution.

In the center of the photo is the plaque for “Metanoia Manor,” a refuge being constructed for young women rescued from traffickers. The home, at a “secure location” in the Diocese of Baton Rouge, will be staffed by four members of the Hospitaler Sisters of Mercy.

The governor’s website said, “The Houston to New Orleans corridor has one of the worst trafficking problems in the country,” with the average age of victims being just 13. In 2016, it said, Louisiana State Police investigated 27 human trafficking cases, rescuing 19 victims; 16 of them were under age 18.

Edwards told Vatican Radio the partnerships are crucial for identifying and assisting the victims. For example, he said, “police officers have always looked at individuals engaged in prostitution as criminals themselves,” but now they are being trained to identify people forced into the trade.

“It’s not akin to slavery,” the governor said, “it is slavery.”

Father Bayhi told Vatican Radio he met Sister Bonetti during a trip to Rome and “her passion is contagious” for rescuing trafficking victims. He invited her to Louisiana to promote awareness of the problem of trafficking.

He set up Metanoia, which works in partnership with the governor, state agencies and law enforcement officers to fight trafficking and assist the victims. “It’s been an incredible opportunity to see a state reach out and say, ‘Slaves no more,’ we need to care for these kids,” the priest said.

NEXT: God’s forgiveness is call to sin no more, pope says