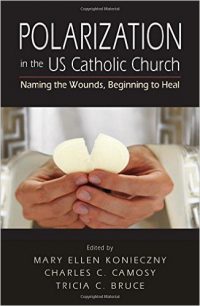 “Polarization in the U.S. Catholic Church” includes the presentations of 19 scholars, parish activists, clergy and laypeople at a conference of the same title held in 2015 at the University of Notre Dame. Each author was allowed to expand and modify their original remarks based upon what they had learned at the conference.

The essays in this volume represent an excellent cross section of the views of American Catholics today on what divides our church and what might be done to bring us together so that we can become again the church of unity and diversity that James Joyce is quoted in the introduction as describing as “Here comes everybody!”

This is a book that all Catholics, whatever their particular views or proclivities, can and should read. Its aim throughout is not proving one point of view over others in ongoing internal Catholic debates but seeking an understanding of what really divides us and why.

The authors address gender and racial differences, our views on sexuality (contraception, abortion), health issues, gender identity issues, the rising importance of the Hispanic community, questions of age and where the millennials are and whether they may lead us into a more holistic and cohesive community. The authors are sociologists and theologians, classroom teachers and active parishioners. They weave personal and professional experiences into their reflections in a way that readers can identify with and through them learn new insights and perspectives on our national Catholic and local parish communities.

Polarization has cost our common Catholicism much, the authors point out. Some folks self-select parishes whose members reflect their own views and prejudices, rather than staying in their geographical parishes and thus having to encounter those with whom they may disagree. Such disengagement from other Catholics with differing points of view reinforces simplistic “either/or,” “us vs. them” approaches that stultify our growth and understanding of each other, of the church and of the world.

A number of the authors show how the internal divisions within the church all too often reflect the political divisions within American society. Instead of searching for solutions to the problems confronting all Americans and American Catholics, there is a tendency to retreat from reality, a disjunction which can only increase the political polarization of our church and our society. One example is the demise of bioethics in Catholic universities, which ignores rather than seeks to solve serious issues faced by many.

The authors, often citing Pope Francis and noting the Focolare movement, offer solutions, calling on Catholics to work toward communities of dialogue rather than disputation. One cites, for example, the joint effort of Rep. Paul Ryan, R-Wisconsin, and John Carr of Georgetown University to create a forum where pro-life and social justice issues, interrelated as they are, could be worked on in common. In such dialogue, seeking common goals to help all in need despite real differences, lies our hope for the future of the church and our country.

PREVIOUS: The envelope, please: The 10 best movies and family films of 2016

NEXT: On film as in reality, epic scale of ‘The Great Wall’ dwarfs the person