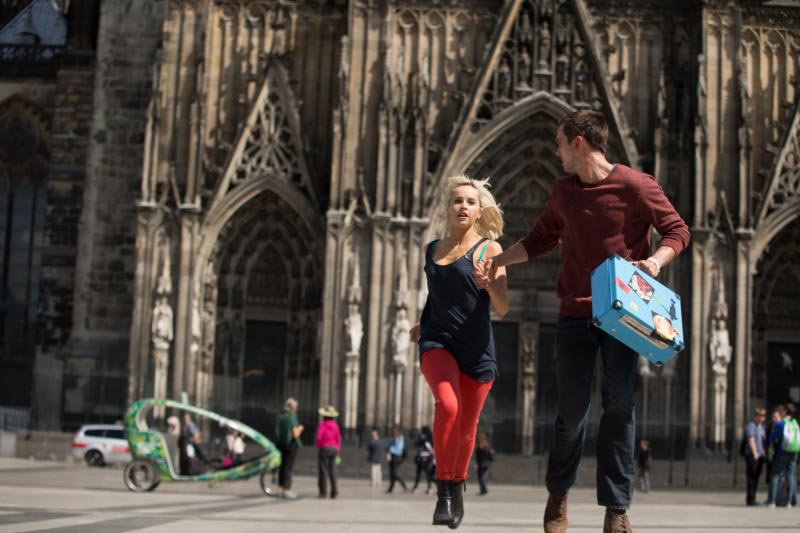 Felicity Jones and Nicholas Hoult star in a scene from the movie “Collide.” (CNS photo/Open Road)

There’s so much high-speed demolition derby, in fact, that it becomes somewhat more entertaining, just on the basis of sheer volume, to focus on that rather than the thin drug-smuggling plot. But director Eran Creevy, who co-wrote the screenplay with F. Scott Frazier, intends all of this with tongue firmly planted in cheek.

We know this because Geran (Ben Kingsley), who hires Casey (Nicholas Hoult), a young American living in Germany, to hijack a truck smuggling cocaine, keeps calling him “Burt Reynolds.” It’s a 1970s reference, meant to imply that Casey’s just a good ol’ boy.

Casey’s career up to now has involved stealing cars and trucks for Geran. He’s despondent about where his life has taken him.

At a rowdy nightclub, he meets another American, Juliette (Felicity Jones), and their whirlwind romance sets him on a new course working honestly in an auto salvage yard. She’s dazzling, quirky and in desperate need of a kidney transplant for which the German health system will not pay.

Raising that kind of money necessitates a return to crime — an immoral means to a good end. So Casey agrees to participate in the complicated drug heist, which is being led by Hagen (Anthony Hopkins), Geran’s former partner and a leading German kingpin.

What could go wrong? Virtually everything. Casey, accordingly, has to escape Hagen and his torturing henchmen repeatedly, and rescue Juliette after they take her hostage.

The outline for a bare-bones thriller is clearly here. But the story loses quite a bit in the execution, and the characters and dilemmas prove less than compelling.

The film contains gun and physical violence and fleeting rough language. The Catholic News Service classification is A-III — adults. The Motion Picture Association of America rating is PG-13 — parents strongly cautioned. Some material may be inappropriate for children under 13.

PREVIOUS: A long history of advertising to kids — and of trying to stymie it

NEXT: ‘Rock Dog’ is animated fun, if far fetched