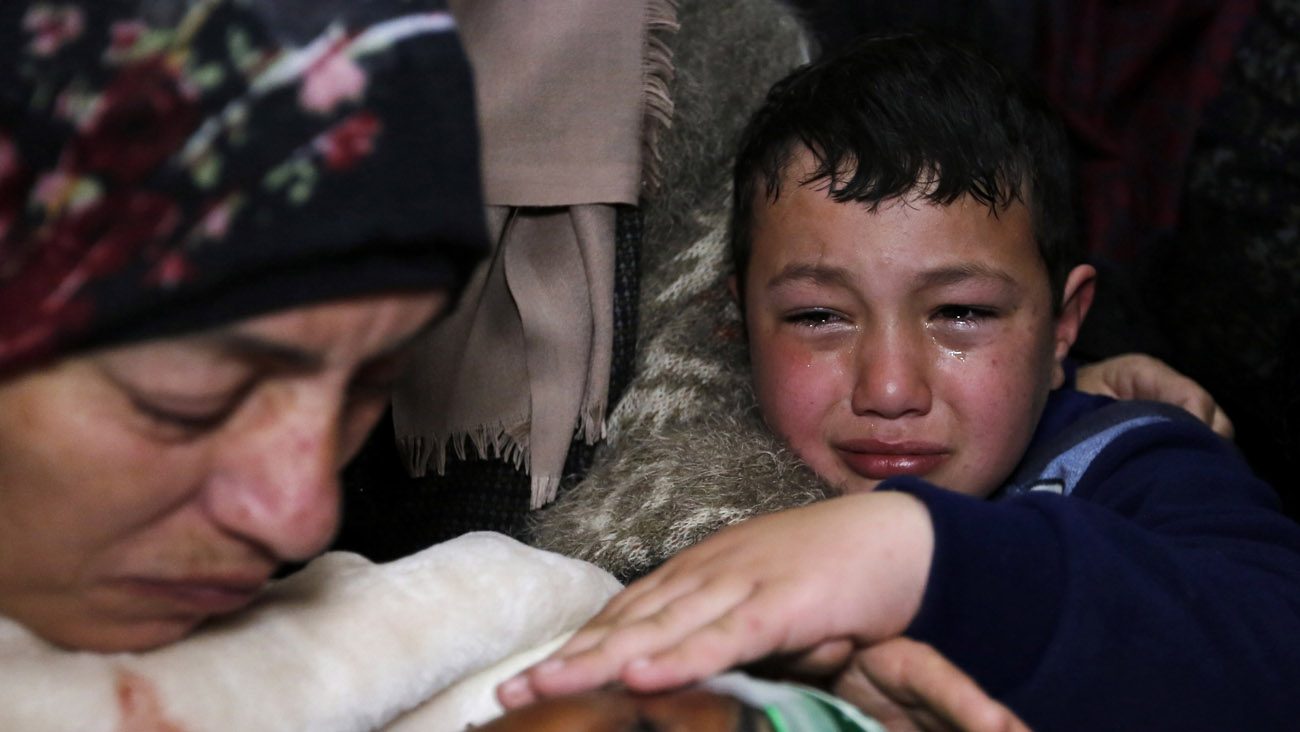 The brother and relatives of 16-year-old Palestinian Mohammad Rajabi weep during his Jan. 7 funeral in Hebron, West Bank. Rajabi was killed by Israeli forces. A prominent U.S. bishop urged the U.S. government to promote a two-state solution to the Israeli-Palestinian conflict. (CNS photo/Abed Al Hashlamoun, EPA)

WASHINGTON (CNS) — The U.S. government should continue to promote a two-state solution to the Israeli-Palestinian conflict and avoid actions that would undermine results, said the head of the U.S. bishops’ Committee on International Justice and Peace.

Drawing on his observations from a January trip to the Holy Land, Bishop Oscar Cantu of Las Cruces, New Mexico, committee chairman, wrote Secretary of State Rex Tillerson and urged him to continue to work for a peace agreement “that respects the human dignity of both Israelis and Palestinians and advances justice and peace for all.”

Bishop Cantu told Tillerson that Israeli settlements were an obstacle to peace.

“Settlement expansion on occupied Palestinian lands undermines a two-state solution, destroying the homes and the livelihoods of Palestinians as well as the long-term security and future of Israelis,” he said.

The bishop spoke of his Jan. 14-19 visit to Israel and the Palestinian territories with bishops from Canada and Europe. In a statement at the end of the visit, the bishops said Christians have a responsibility to oppose the construction of Israeli settlements in Palestinian territories, because “this de facto annexation of land not only undermines the rights of Palestinians … but, as the U.N. recently recognized, also imperils the chance of peace.”

In his Feb. 1 letter, Bishop Cantu reminded Tillerson that 2017 marked 50 years of “a crippling occupation of the West Bank, East Jerusalem and Gaza, crippling for both peoples.”

He also spoke of problems created by the Israeli security barrier, a series of cement slabs, barbed wire fences and security roads snaking across part of the West Bank. If completed as planned, the separation wall would stretch nearly 400 miles and restrict the movements of 38 percent of residents of the West Bank.

“The Cremisan Valley is home to a Salesian monastery, convent and school, and the agricultural lands of 58 Christian families who live in nearby Palestinian towns,” Bishop Cantu said in his letter. “The building of the wall constricts residents’ movement, impairs access to their lands, separates Christian institutions from those they serve, and encourages Christian emigration.

“The Cremisan Valley is emblematic of the alarming number of Palestinians who have lost their homes and livelihoods. Settlement expansion, confiscation of lands and the building of the separation wall on Palestinian lands violate international law and undermine a diplomatic solution,” he said.

“Moving the embassy to Jerusalem would erode the U.S. commitment to a two-state solution and is a threat to pursuing peace and ending conflict. Its impact would incite and destabilize the area, compromising U.S. security,” Bishop Cantu said.

The 1995 Jerusalem Embassy Act authorized funding for the embassy to be moved to Jerusalem by 1999. However, the act contained a provision to keep the embassy in Tel Aviv if it was in the best interests of U.S. national security. U.S. Presidents Bill Clinton and George W. Bush pledged to move the embassy, then kept it Jerusalem so as not to inflame tensions.

Bishop Cantu told Tillerson the U.S. Conference of Catholic Bishops would continue to engage the State Department on international issues, but that getting a peace agreement for Israel and Palestine would “require arduous work.”

“It has been 50 years of tumult and turbulence, of egregious injustices and random acts of violence. However, the United States has always provided leadership and support to the peace process,” Bishop Cantu said.