Virginia families know the heartbreak of opioid use, addiction 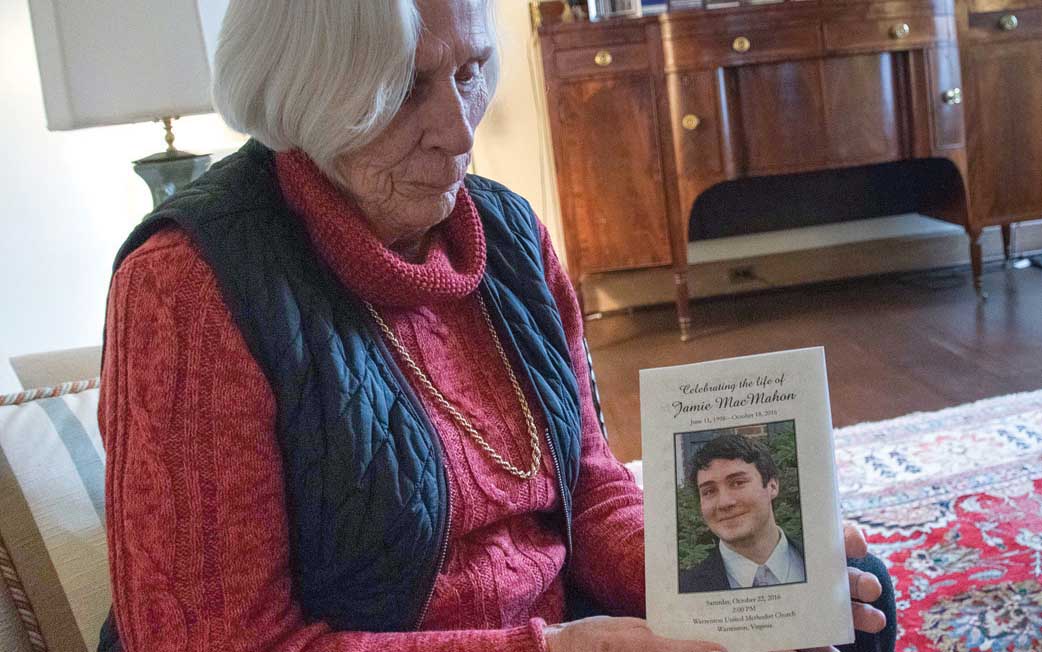 WARRENTON, Va. (CNS) — Until he offered the funeral Mass for a 23-year-old son of a grieving family, Father Kevin J. Fimian was untouched by the reach of the opioid epidemic.

“I wasn’t aware how bad it really is,” said the parochial vicar of St. John the Evangelist Church in Warrenton.

And bad has been getting worse.

Last year in the Warrenton town limits alone, police responded to 19 opioid overdoses — 15 from heroin and four from prescription drugs. Six of those overdoses were fatal.

“(People) do it once, and it’s a rush that cannot be equaled in normal life and in subsequent use,” explained Father Fimian. “It’s a cult of death.”

Jamie, an 18-year-old high school graduate from Fauquier County, was one of the victims of the opioid epidemic. He played lacrosse in school, and had aspirations to be a sports trainer. “He was just an average kid today,” said his grandmother, Ann MacMahon, “whose parents loved him so much.”

At age 14, Jamie had begun to experiment with drugs. At first it was marijuana, then prescription drugs from people’s homes, then drugs he bought on the internet. “His father knew for years and worked closely to get him back,” said MacMahon, a member of St. Stephen the Martyr Parish in Middleburg. “(Jamie) wasn’t bad — he was hooked.”

One morning last October, Jamie’s mother went into his room and found him dead of an accidental overdose. Their whole family was shocked, and devastated.

“The pain is exquisite,” said MacMahon — for her, the family and especially for her son, Jamie’s father.

“I have had two heart attacks, I’ve had six children, I’ve had open heart surgery. I have never experienced that feeling — to know that I had outlived a grandchild,” she said.

Deaths like Jamie’s didn’t happen when she was growing up, MacMahon said. Only musicians in faraway cities used drugs.

“When I was in high school, if anyone was using a mood enhancer or drinking, it wouldn’t be cool,” she said. In two generations, that has changed rapidly. Illegal drugs are more available and in some social circles, doing drugs is a way of fitting in.

“It’s a tragic waste,” said MacMahon. “I don’t know when (the pain) goes away but I’m very glad I have my faith. I think that’s sort of what’s pulling me along.”

Though months have passed since he died, it’s still hard for MacMahon to believe Jamie is gone.

Sometimes, she told the Arlington Catholic Herald, diocesan newspaper, “I wake up in the middle of the night and think, ‘Is Jamie really dead, I mean really dead?'”

George Swanberg, president of Lifeline Addictions Foundation, held up a picture of two blood-flow brain scans. The first was smooth and slightly bumpy; the second was as riddled as a block of Swiss cheese. It was the difference between the brain of a healthy person, and the brain of a heroin user.

“There are holes in the blood flow and if you’re not able to use that part of your brain, obviously things are not going to go well,” he said.

Most of the time, it’s the job of a counselor to comfort the afflicted, said Swanberg, a parishioner of St. John in Warrenton. But with addicts, it’s different. Opioids, such as heroin, Vicodin and Percocet, are drugs that mimic what the body already produces. “That’s why it’s so addictive,” said Swanberg. “It causes euphoria and imitates the body’s natural painkiller.”

On Feb. 23, Gov. Terry McAuliffe signed into law four bipartisan bills that aim to address Virginia’s ongoing opioid epidemic, including initiatives to increase access to the drug naloxone, which reverses overdoses, and to prohibit doctors from prescribing more than a seven-day supply of opioids to patients not suffering from cancer, chronic pain or receiving palliative care.

Besides hurting the brain, abusing drugs and alcohol robs people of ambition and lulls them into a false sense of security. It’s Swanberg’s job to jolt addicts back into reality and hopefully get them clean. “After 45 years, it’s my reason why God put me here,” he said.

Swanberg came into this field in the early 1970s, and began working with heroin-addicted soldiers returning from Vietnam. Since then, the use of opioids has only increased. “I used to have maybe three or four calls in six months,” he said. “Last week it was three, and I have one in treatment now.”

Today, he runs LifeLine Counseling Center in Fairfax, a drug-free counseling and intensive outpatient treatment center primarily for substance abusers. Patients are drug tested frequently, participate in therapy sessions and are encouraged to live a healthy lifestyle. He often refers patients to nutritional therapy — a treatment that he believes can be very effective in healing the brain.

“In truth, most people do not want to be on medication. They want to think and believe that they are healthy all by themselves,” he said.

A number of new state programs are making it easier and more affordable to find professional help for addiction, said Swanberg. He hopes people struggling with drugs will take advantage of these.

“Number one — don’t try to do this by yourself,” he said, something he understands from both his work and his personal life.

“I had a nephew who killed himself because of this addiction within the last six months,” said Swanberg. “It’s personal. I know from the inside what it’s like for the family.”

“Here, we’ve seen 12-year-olds up to 80-year-olds abusing heroin,” said Warrenton Police Chief Louis Battle. “Different economic levels, ethnic groups, different areas of the community — it just has no logic attached to it.” So they’ve had to think outside of the box.

“We realized traditional methods of dealing with this just aren’t working — arresting them, putting them in jail or talking them into going clean. The pull of the drug is too strong and the lack of fear of incarceration as a deterrent is too weak,” he said. “We use anything and everything and just give it a try.”

Warrenton Police Chaplain Wally Smith meets with the user and their family, connects them with rehabilitation centers and other social services they might need. Smith and Battle discuss the epidemic with local church leaders, and in January, all the town’s pastors and priests preached on the harms of opioids. Smith and others host a support group called Celebrate Recovery both at The Bridge Community Church in Warrenton and at the jail. “Almost all (the inmates) are heroin addicts,” said Smith.

Smith’s son, Brian, started the jail group while incarnated for using heroin. At age 14, he was prescribed Percocet for a knee injury, which first gave him a taste of opioids, said Smith. Brian relapsed several times in his 15-year struggle with addiction, and died last year of an overdose at age 31.

“In his own words, his best times sober were never as good as his best times high,” said Smith. After that many years, “the drugs change the way you look at things.”

Because opioid addiction is so difficult to overcome, prevention is critical. Battle encourages parents to rid their medicine cabinet of unused prescription drugs and to talk to their children early about the dangers of drugs.

“As harsh as it sounds, our kids know a lot more than we think,” he said.

Maraist is on the staff of the Arlington Catholic Herald, newspaper of the Diocese of Arlington.

NEXT: Priest has ministry to street artists who are transforming neighborhood